Busch President and COO Jim Atchison announces the new parks to be built in Dubai. The screen behind him shows how the parks will be layed out on the island shaped like Shamu.

The big announcement today at SeaWorld didn’t bring any news for Orlando, but it is big news for Busch and Dubai. Worlds of Discovery – SeaWorld, Busch Gardens, Discovery Cove and Aquatica – will soon have a home on a whale-shaped island located on “the Crown” of The Palm Jebel Ali in Dubai. The announcement was made this morning by Busch Entertainment Corporation, the family entertainment division of Anheuser-Busch Cos. and Nakheel, one of the world’s largest property developers.

Click here for a high-quality 640×360 video of the announcement.

Low-quality streaming video of the announcement:

Busch and Nakheel, a key company in Dubai’s transformation into one of the fastest growing cities in the world, reached agreement earlier this month on the terms of a Memorandum of Understanding that calls for the phased construction of four theme parks on the second of the company’s three Palm man-made island developments. Nakheel will invest the necessary capital to build and operate the parks. Busch will license its brands to Nakheel and operate the parks under a management contract.

Worlds of Discovery will occupy a section of The Palm Jebel Ali known as “the Crown,” which will resemble a giant killer whale when reclamation work is complete. Nakheel’s plans for The Palm Jebel Ali, currently the world’s largest man-made island, also call for the development of commercial, residential and shopping districts, as well as resort hotels and restaurants.

“Dubai has become one of the world’s leading tourist destinations, and a key part of the strategy has been attracting world-class entertainment brands to the emirate. We have already concluded partnerships with major brands such as Trump, Cirque du Soleil, and Atlantis, and the partnership with BEC is a further example of Dubai’s growth as a city of global prominence,” O’Donnell said. “We are extremely honored that The Palm Jebel Ali will become home to the first Worlds of Discovery theme parks outside of the U.S., which is not only a major coup for Nakheel, but for the whole of Dubai.”

The Worlds of Discovery project will be phased. Worlds of Discovery on The Palm Jebel Ali will also include a variety of other family activities, including resort hotels, spas, shops and restaurants. Preliminary design work and site planning is underway, with the first phase expected to open in 2012.

More than 300 million cubic yards of sand and 10 million tons of rock have been used in the construction of The Palm Jebel Ali, with the island adding more than 52 miles of coastline to Dubai. Reclamation of the island is nearly complete and Nakheel has already begun putting an infrastructure in place that will eventually support a population of more than 280,000 people.

The Worlds of Discovery in Dubai will be designed and managed by Busch. The parks will be staffed by a combination of Busch expatriates and executives trained in Busch parks in the United States and workers recruited regionally.

SeaWorld Dubai will include many of the attractions visitors have come to enjoy, including killer whale, dolphin and sea lion attractions and marine themed rides. Busch will provide all animals for the parks developed in Dubai.

SeaWorld, Busch Gardens, Discovery Cove and Aquatica are holding a ceremony at 11 a.m. this Thursday at SeaWorld to announce “the most significant news in our history”.
We’ll be there to capture the announcement, but you won’t have to wait on us to report on it here or in our next issue. The event will be Webcast live at WorldsOfDiscovery.com.

Any guesses what the announcement will be? 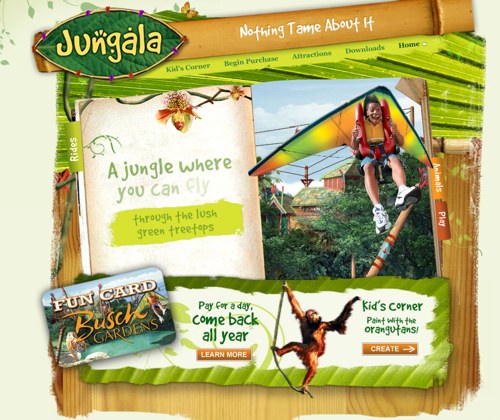 Busch Gardens has launched a full Web site for its new Jungala section of the park.
You can read all about Jungala in the Feb./March issue. 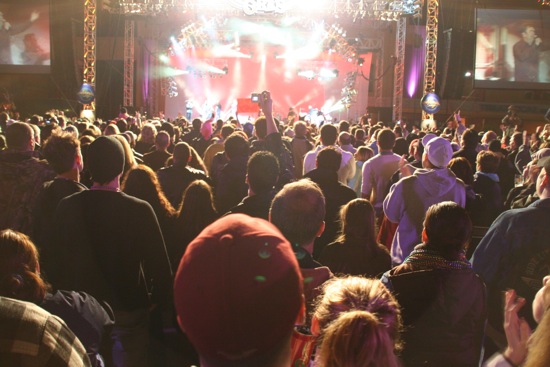 There are many concerts ongoing and upcoming at the local theme parks including Universal Studios, SeaWorld, Busch Gardens, Cypress Gardens and Epcot. All of these concerts are free with park admission. Here’s what’s happening now, and a link to the official pages for the full lists of performers.

Already started each Saturday night at Universal Studios is their annual Mardi Gras. This Saturday’s concert is Sara Evans. The events also includes a parade, entertainment from New Orleans and more.
Mardi Gras

At Cypress Gardens this Saturday, you can see Loretta Lynn, and on Sunday it’s The Temptations Review featuring Dennis Edwards.
Cypress Gardens concerts

Busch Gardens’ Nairobi Field Station is undergoing a transformation to allow greater interaction between guests and the park’s animal ambassadors. The new area is scheduled to reopen in January 2008 as Jambo Junction, a name inspired by a Swahili greeting.

Jambo Junction will use the existing field station infrastructure to create a new, interactive attraction. The conversion will include a walk-through station, expanded outdoor habitats and more animal presentations. Jambo Junction guests will have the opportunity to participate in animal feedings, lessons in husbandry and behavior training. Featured animals will include Caribbean flamingos, lemurs, cucuses, sloths, opossums and baby animals.

This area will also be the permanent home for Busch Gardens’ animal ambassadors. Animals in the ambassador program travel nationwide for educational presentations in schools, community events and media events. Each animal ambassador’s name and fun facts will be introduced to the guests.