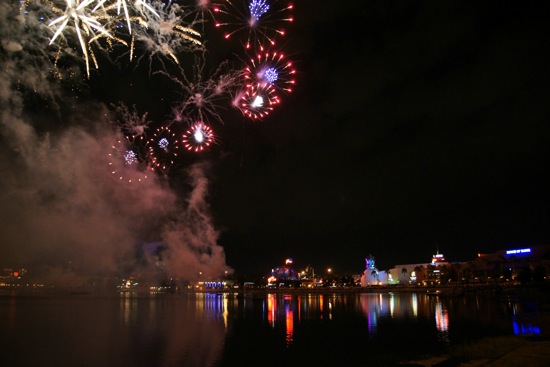 I made the mistake of taking my family to Downtown Disney to watch the fireworks last night. The fireworks were set to start at 10:30 p.m., so we arrived around 9:30 p.m. The traffic was a mess, as expected. All of the parking lots were full except for the far one down past the West Side end. So that’s where we parked after about a half-hour of getting around to that side.

The show started on time and was spectacular – for about five minutes, then it was over. We decided to just hang around for about a hour before heading to our car to allow the traffic to clear, or so we thought. We headed to our car around 11:30 p.m. only to see the cars lined up in the parking lot and people standing around outside of their cars, where they had been stuck for the last hour or so.

So we headed back into the West Side to wait it out while enjoying the music at Bongo’s and some pretzels from Wetzel’s. We waited a while, sent someone to check the traffic, waited some more, etc. Around 1 a.m. we decided to just go out to our car and see if we could get out. To our surprise, the cars that had been there since 11 p.m. were still in the same exact spot. People started honking their horns out of frustration. It sounded like Times Square. I walked around the parking lot a bit, trying to see if there was an accident or what the problem was. Others were wandering, sleeping in their cars, having a mini party on the asphalt, and of course yelling at each other.

The traffic finally started moving in our lot around 1:30 a.m. I never did hear if there was an accident or what happened, if anything. Some people were saying there was an accident, others were saying it was just that two huge parking lots were trying to merge into one exit and that this happens every year. Does anyone know? Was there a wreck? Have you ever been stuck at Downtown Disney?

So I had four hours of waiting for a five-minute fireworks show. Others had been there longer to get a good spot to watch. At least I got some good pictures out of it. I took these pictures from the walkway from the West Side to Saratoga Springs. More pictures below … END_OF_DOCUMENT_TOKEN_TO_BE_REPLACED 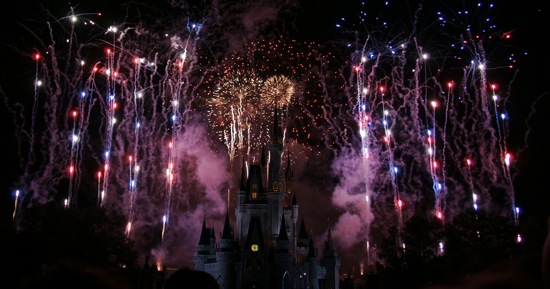 On Tuesday night, I attended a preview of tonight’s Magic Kingdom fireworks entitled, “Disney’s Celebrate America – A Fourth of July Concert in the Sky”. In honor of America’s Independence Day, we’re bringing these fireworks to all of you who can’t be at the parks.

Below is an edited YouTube version of the show (due to YouTube’s length requirements).

A higher resolution, full-length version is available on our Videos page.

On July 4 and 5, SeaWorld will celebrate the red, white and blue with the “Let Freedom Ring” fireworks show, featuring a giant projection screen illuminating some of America’s greatest historical moments set to patriotic music and narration. Guests will have the opportunity to experience the 12-minute show twice nightly at 9:15 and 10:45 p.m.

SeaWorld also is giving guests a reason to stay late to experience the park in a new way. Now through Sept. 1, evenings will rock as SeaWorld AfterDark includes Shamu Rocks and Bayside Ski Jam.

Shamu Rocks is a killer whale show driven by a rock beat and visual effects.

Bayside Ski Jam is an all-new, nighttime ski show that jams on the lake and in the sky. The show features expert skiers using the water as their stage to entertain guests at Bayside Stadium. 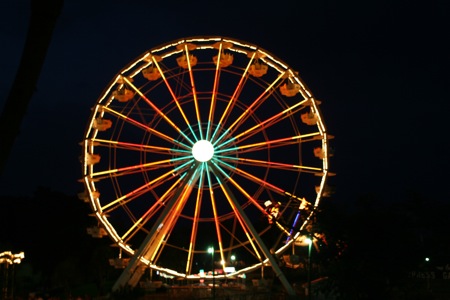 Guests of Cypress Gardens on July 4 can enjoy the patriotic sounds of the Dixieland Band through out the day in Jubilee Junction and there will be lakeside performances by the Fletcher Cane Band.

In addition to the patriotic music, guests will be able to see a special nighttime ski show at 9 p.m. Elements of the show include themed music, displays of pyrotechnics and powerful spotlights. What better way to celebrate the Fourth of July than to light up the sky with a grand display of fireworks? The kaleidoscope of colors will dance across the sky to a score of music.

Wet ‘n Wild will host its 9th Annual Fiesta San Juan this Saturday. The party starts at noon with activities for the entire family and continues until midnight when guests can honor the tradition of “The Night of San Juan” by taking a big splash in the water at midnight. There will be food, live music and dancing with Telemundo, Mega 98.1 and El Nuevo Dia.