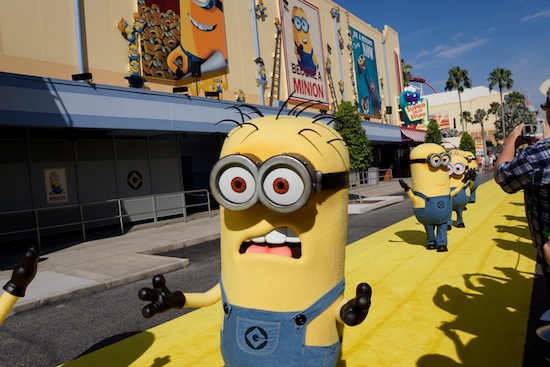 A yellow carpet full of stars, executives and Minions kicked off the grand opening of Universal Orlando’s brand new ride at Universal Studios on July 2, 2012: Despicable Me Minion Mayhem.

Based on the blockbuster Universal Pictures and Illumination Entertainment film Despicable Me, the ride was created by Universal Orlando in partnership with Chris Meledandri, founder and CEO of Illumination, and his filmmaking colleagues. The ride places guests in the midst of an original adventure that combines a new storyline, new animation, the latest 3D technology – and the heart, humor and characters of the film. 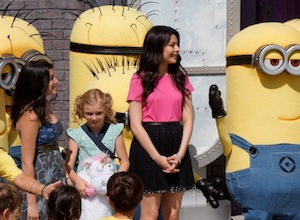 Guests will see their favorite characters from the film – all voiced by the original cast: Gru (Steve Carell), the world’s greatest super-villain, and his daughters Margo (Miranda Cosgrove), Edith (Dana Gaier) and Agnes (Elsie Fisher). (The voice actresses of the three daughters, pictured left, were at the grand opening.)

Guests will enter the ride through the towering façade of Gru’s house, pick up 3D “minion goggles” in his living room and be scanned for “human germs” in the Minionization Prep Room. Gru is working on something “really big” and recruits guests for the job, transforms them into minions and sends them off for minion training. From there, guests go on a wild ride where they evade water sprayers, giant flyswatters, anti-gravity rooms and more. After the ride, guests join a Minion dance party.

“We worked to blend the spirit and heart of the film with a great new adventure for our guests and their families,” said Mark Woodbury, president of Universal Creative. “Where else can your family laugh, dance, celebrate and become a minion all at the same time?”

The attraction’s grand opening caps Universal Orlando’s “Year to be Here” – during which Universal debuted more new entertainment experiences across its entire destination than any other year in its history. Despicable Me Minion Mayhem follows the debut of a newly-enhanced Blue Man Group Show at Universal CityWalk, the high-tech re-launch of The Amazing Adventures of Spider-Man at Universal’s Islands of Adventure and the spring openings of Universal’s Superstar Parade and Universal’s Cinematic Spectacular – 100 Years of Movie Memories at Universal Studios. 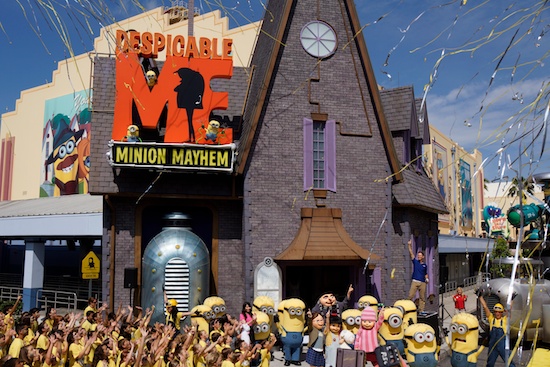