An animatronic figure with an estimated $1 million price tag will sing songs and interact with guests as they wait. Employees dressed as “Toy Story” characters will stroll among the crowds.

“There’s an erosion of patience,” said Bruce Vaughn, the chief creative executive for Walt Disney Imagineering, the company’s development group. “People’s tolerance for lines is decreasing at a rapid rate.”

“Guests are pretty much no longer interested in being passive viewers,” Mr. Rasulo said.

Modern visitors expect much more. Mr. Potato Head — with help from a dozen video cameras, several computers, an unseen ride operator and a $1 million budget — will be able to make his mouth form words, a first for Disney animatronics.

The comedian Don Rickles, whose gravelly voice brought the character to life in the films, was hired to record 750 words and four songs. The hidden ride operator, armed with a computer and cameras that scan the crowd, will then choose phrases based on the actions and appearance of people standing in front of it. (“Hey, you in the red baseball hat.”)

The goal was to make the character so perfect that it looked as if it had just stepped out of the movies. Pixar executives tightly monitored every detail and helped direct Mr. Rickles. At a recent taping, the Pixar team put him through his paces.

“Let’s put a little more chuckle in that line,” said Roger Gould, Pixar’s creative director, sitting in a recording studio as 10 other executives and engineers took notes and adjusted instruments.

Mr. Rickles complied, repeating a line that would play if the ride stopped unexpectedly. “Folks, we’re having a little delay here,” he said. “For your safety, please stay seated inside the game tram.”

Click here for the full article with a time-lapse construction video and more pictures.

We posted yesterday that ‘American Idol’ would be coming to Disney’s Hollywood Studios soon and found it very interesting that the word “live” was always in quotes in the press release from Disney.

As it turns out, there is definitely more to it than simply auditioning in front of Disney Cast Members or a guest-filled audience.

From Disney’s online cast member Web site, The Hub:
“That experience will include an audition process, open to all who register, where guests perform “live” in video kiosks in full view of a panel of screeners.”

It seems the initial registration and auditions will not take place in front of cast members or guests directly, but rather via video kiosks. It’s unclear as to whether the “screeners” are real people or virtual singing “experts”.

Practically speaking, this makes perfect sense, as it’s unlikely that Disney would want to openly reject someone to their face, telling them their singing isn’t good enough. It’s also unlikely that any of Disney’s cast members would want the job of listening to hundreds of auditions every day, with most of them likely being less than stellar.

Disney has recently been putting an emphasis on technology on most of its new attractions and it appears that this one will be no different.

Walt Disney Parks and Resorts will create an “American Idol” attraction that will bring the television and pop culture phenomenon to life at Walt Disney World Resort in Florida, it was jointly announced today by Jay Rasulo, chairman of Disney Parks and Resorts; Simon Fuller, CEO of 19 Entertainment; and Keith Hindle, executive vice president of FremantleMedia Licensing.

The attraction, slated to debut in late 2008, will be located at Disney’s Hollywood Studios theme park and will follow the model of the high-energy show. Disney guests will be able to experience the challenge of auditioning, the rush of performing on stage in competition, or the thrill of judging the performances in a live interactive entertainment setting with all the glitz and glamour of the distinctive “American Idol” set.

That experience will include an audition process, open to all who register, where guests perform “live” in front of a Disney’s Hollywood Studios producer to be cast in a theme park show. After backstage preparation – working with a vocal coach, hair and make-up – it’s lights up and showtime in front of a “live” audience and a panel of judges.

Guest performers with the highest votes will compete in an end-of-day Grand Finale show at Walt Disney World, and the winner of the Grand Finale show will receive a guaranteed reservation for a future regional stadium audition — to ensure no waiting in long lines. But when it comes down to the television show auditions, everyone is treated equal.

“Millions of people have imagined themselves standing on the ‘American Idol’ stage,” said Rasulo. “We’re excited that we will be bringing this dream to life every day at Walt Disney World.”Added Fuller, “One of the most remarkable elements about ‘American Idol’ is that for a brief moment each week, we can provide TV viewers the opportunity to imagine life as America’s next superstar. Disney’s new attraction perfectly captures what we at ‘American Idol’ feel is the heart and soul of this brand, real people getting a shot to make their dream a reality.”

“This partnership,” noted Hindle, “brings the number one show on television, watched in over 100 countries, to the number one theme park destination in the world. It’s a perfect combination and opportunity to offer everyone a taste of the ‘American Idol’ experience.”

Attractions Note: The most interesting part about this announcement is the bolded part above.  Notice that “live” is in quotation marks.  Perhaps your audition might be in front of a virtual character, not unlike Crush at Turtle Talk or the monsters at the Monsters, Inc. Laugh Floor? It’s hard to say. There will most definitely be real people involved every step of the way, but I’m willing to bet that technology will be involved at some point during the process.

If you think the best requirement for creating a great bubble is a piece of gum… SeaWorld Orlando’s dolphins are about to burst your bubble.

Young dolphins at SeaWorld have taken bubble-making to the extreme. Two young juveniles have been observed creating underwater bubbles with their blowhole, then using their rostrum to manipulate and play with the bubbles – spinning them, making them smaller and larger, swimming through them and popping them.

While visiting SeaWorld, stop by the Underwater Viewing area at Dolphin Cove and you just might get to see this playful pair.

As usual, there are quite a few job ads in the newspaper today. Including some interesting ones I haven’t seen before. 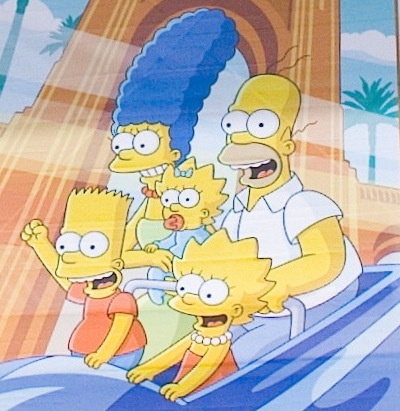 Universal Orlando has a cute ad in today’s Orlando Sentinel. It features the above picture of The Simpsons and mentions the new ride opening this year. Below it says “Suddenly, calling Universal a family experience has a whole new meaning!”

It doesn’t give many details on the listed Spring Break Job Fair and I’m not sure what they mean by spring break. I assume they’re trying to get college kids to apply during spring break. It’s going to be held this Friday from 3 to 7 p.m. and again Saturday starting at 10 a.m. The ad doesn’t say where the job fair will be held, but you can visit www.universalorlandojobs.com for more information.

The positions are full-time four-year programs that include classroom and on-the-job training. Once you complete the four years, you’ll be eligible to apply for a Journeyman position. To apply, visit www.disneycareers.com and search for requisition ID #135024 or call (407) 828-1000.

Other jobs in today’s paper include many positions at SeaWorld and Aquatica (www.becjobs.com) and general Disney World jobs ad (www.disney.go.com/DisneyCareers)
There’s also a job opening by Enjoy Your Face Inc. looking for artists to do “theatrical face painting in Orlando theme parks.” Call (407) 240-6380 to apply.