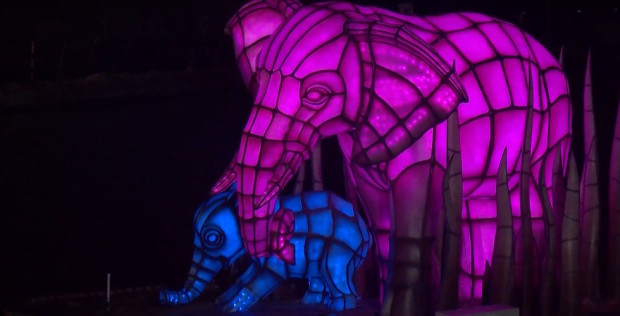 UPDATE – April 5, 2016: The Rivers of Light show has been delayed. No opening date has been given, but Disney says they’ll know more in mid-to-late May.

After the sun sets, guests will gather waterside as this musical experience celebrates the magic of animals and humans and the natural world with a blend of performers, floating lanterns and theatrical animal imagery.

On the natural stage of Discovery River, the ceremony begins with the arrival of a pair of mystical hosts, two complimentary forces who come to the river bearing gifts of light. They set out from the shore on lantern vessels, engaging in a dance of water and light to summon the animal spirits. With these storytellers as guides, the wonders of Rivers of Light unfold, building to a finale with bursts of light as animal images soar to the heavens, signifying the ancient belief that when animals passed from one world to another they danced in the sky and became rivers of light.

‘Rivers of Light’ - Behind the Scenes | Disney’s Animal Kingdom

To create Rivers of Light, Walt Disney Imagineers and Disney Creative Entertainment partnered with experts including designer Michael Curry, whose Disney Parks contributions include “Finding Nemo: The Musical” and “Disney Festival of Fantasy Parade.” Film composer Don L. Harper created the musical score for the nighttime show which also includes an original song by composer Mark Mancina. Disney also collaborated with the filmmakers at Disneynature to bring never-before-seen footage, telling stories from the animal world to the show.

Other nighttime happenings at the park include:

Nearby on Discovery Island the area will come alive each night with a celebration filled with music and dance. The theme park’s Tree of Life will undergo “awakenings” throughout the evening as the animal spirits are brought to life by magical fireflies that open a window into the body of the tree, revealing colorful stories.

Each evening, the popular Kilimanjaro Safaris daytime experience is bathed in the look of sunset with special lighting allowing guests to explore and enjoy this attraction well into the night. During the expedition guests can now enjoy the wildlife at night, and may discover two new species: African wild dogs and hyenas.

When the sun sets, the village of Harambe will become a hot spot with the new Harambe Wildlife Parti. Here, “party animals” can dance alongside local street musicians and entertainers, partake in foods and libations and explore the wares of village artisans and merchants. And the new Discovery Island Carnivale will captivate guests with music, dance, vibrant costumes, and culinary creations, spreading from one end of the island to the other.

In addition to the new entertainment offerings beginning this summer, guests will enjoy Disney’s Animal Kingdom’s newest eatery, Tiffins. Open for both lunch and dinner, this new dining experience will celebrate the art of traveling and include waterfront views from both indoor and outdoor seating areas. “Tiffin” is an Indian English word meaning midday meal or type of container used to carry food while traveling.