It wasn’t even quite the last week of October at my local Target and Walmart type stores that Halloween decorations were coming down and all things orange and black were being consolidated. This was followed by empty “seasonal items” shelves. Finally on Nov. 1, Christmas decorating and shopping was in full swing.

It should come as no surprise that Christmas in the parks comes early too. The “city sidewalks, busy sidewalk” are indeed all dressed in holiday style. Yes, soon it will be Christmas Day, just not very soon. While I was suffering the Orlando humidity in August, there was a big crane hovering over Cinderella Castle. Castle refurbishment? No, it was there to facilitate hanging thousands of twinkling Christmas lights on the castle.

Over the next few weeks, in addition to my non-holiday Out of the Loop posts, I am planning on showcasing some of the holiday sights from attractions around the country and the world. 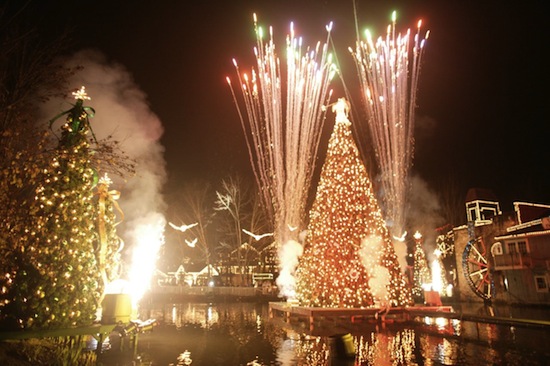 Pigeon Forge, Tenn. – Dollywood sits at the base of the Great Smoky Mountains in Tennessee just about 700 miles from Orlando. I believe most folks east of the Mississippi River have made a trip to the area sometime in their life. During the summer months, Dollywood is very much like any theme park, but certainly mixed with a bit of Tennessee and Dolly Parton charm. They have coasters like the looping Tennessee Tornado and the wooden Thunderhead. They have water rides, and kiddie rides. They also have a water park. 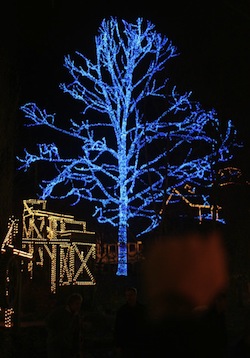 During the winter months, they feature Dollywood’s Smoky Mountain Christmas. The award-winning event features six live shows that are performed multiple times a day. The shows cover holiday themes from religious to secular. More than 20 attractions run including several coasters and The Polar Express 4D movie. Santa is there, of course, participating in breakfasts, working in his Dollywood workshop and participating in parades. To complete the experience, the Dollywood chefs cook up special holiday goodies. These include huge buffets with turkey and dressing and all the trimmings. What’s a Christmas event without the lights? Yes, they have thousands of twinkling lights to set the mood too.

Memorandum: This past week, Cincinnati lost 37-year Cincinnati Enquirer writer Jim Knippenberg. He was known for his general reporting and his gossip column “Psst!” which he wrote for 22 years. He’d write about the Opera, the Zoo or Oktoberfest. What I remember most about him was his theme park writing. There was never a coaster or water slide he wouldn’t try out. He would bring those reports to the reader with enthusiasm and humor. Thanks Mr. Knippenberg. 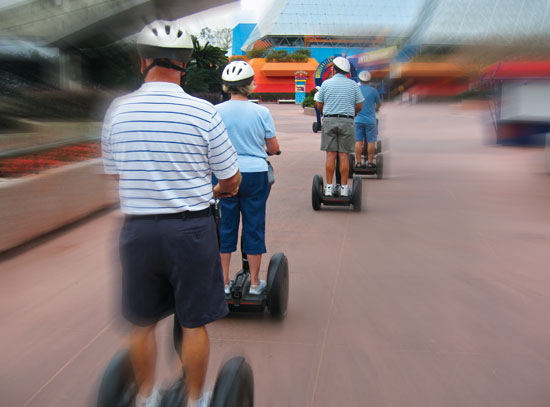 A new tour of Epcot called “Nature-Inspired Design” recently premiered. It is the fourth Segway-based tour at Walt Disney World and the third at Epcot. Here’s Disney’s official description:

Discover the wonder of nature-inspired design as you glide through land, sea and air at Epcot®.  This 3-hour backstage tour allows you to experience the symbiotic relationship between nature and the nature-inspired designs incorporated into Epcot® pavilions and attractions.  Glide over California on Soarin’™, tour the greenhouses at The Land pavilion, explore The Seas with Nemo & Friends® and visit Life Support scientists to learn how technology helps us maintain a better balance with nature.

After completing a required product overview and training, you will be equipped with a helmet and a Segway® Personal Transporter X-2 to experience this unique off-road tour. Epcot® Cast Member scientists share how their work environments are inspired by nature’s own design and how they use evolving technologies to maintain a balance with the world around them.  After experiencing “air, land and sea” you will have the opportunity to ride your Segway® X-2 in a designated off-road backstage area at Epcot®.

Since the tour is so new, it has not yet been added to Disney’s official Tours and Experiences page. However, you can call 407-WDW-TOUR to book the “Nature-Inspired Design” tour today.

So far, the tour is available only at 8:15 a.m. on Saturdays and Tuesdays. It costs $124 per person and is available for guests ages 16 and older.

For more information on Disney’s “Around the World at Epcot” and “Wilderness Back Trail Adventure” Segway tours, pick up a copy of Volume 2, Issue 2 of Orlando Attractions Magazine.