Star Wars: Galaxy’s Edge has already opened in Disneyland California, but soon guests will be exploring its duplicate counterpart in Disney’s Hollywood Studios at Walt Disney World. With official cast member previews beginning Thursday, let’s take a look at what’s left to finish. This photo report is made possible by shots provided by our contributor, @bioreconstruct on Twitter.

END_OF_DOCUMENT_TOKEN_TO_BE_REPLACED

The TRON movies have had a unique past with the Walt Disney Company. From the ground-breaking technical effects of the first film in 1982 to the stunning updated visuals of the second film in 2010 and a company-first motorbike inspired coaster that opened in 2016. With fans dying to go to The Grid, Disney brought forth just that at Shanghai Disneyland. But, fans in the western hemisphere begged for a duplicate of a coaster that they thought would never happen.

END_OF_DOCUMENT_TOKEN_TO_BE_REPLACED

We are less than one year away from the opening of Star Wars: Galaxy’s Edge in Disneyland California. While Walt Disney World was the first park to get a spaceship, Disneyland has started the construction and theming of the Millennium Falcon. This photo report, with aerial photos by NearMap, and in-park photos by Matt Roseboom and @TharinWhitePhotography on Instagram, showcases a monumental step in the Galaxy’s Edge construction.

END_OF_DOCUMENT_TOKEN_TO_BE_REPLACED

Many rumors have risen over this mysterious Harry Potter roller coaster at Universal’s Islands of Adventure. Could it be the forbidden forest, or perhaps the courtyard of Hogwarts? And which way does it go anyway? We are here to check out the current progress, and speculate some more. This photo report, with shots provided by Jonathan Rodriguez/Sublime Image Photography, oversees the current construction going on at the Wizarding World. 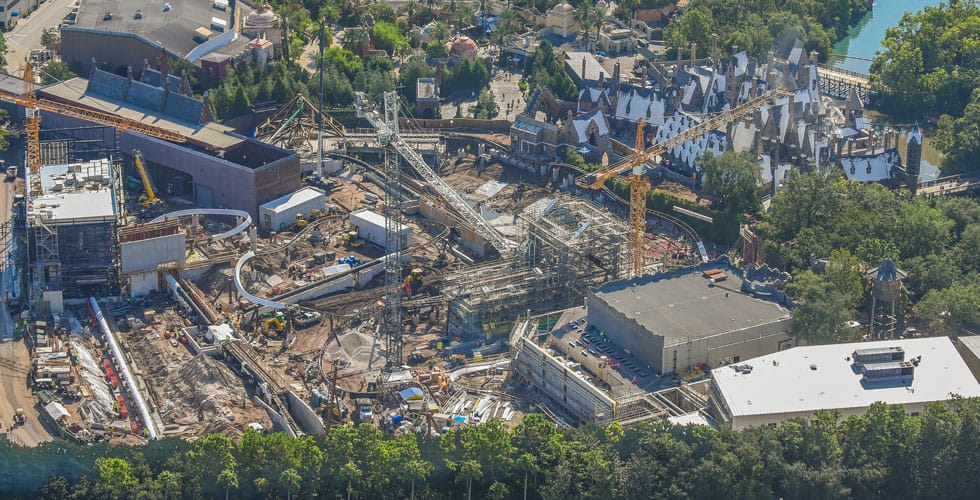 END_OF_DOCUMENT_TOKEN_TO_BE_REPLACED

Aerial view of Toy Story Land. (Slinky Dog can be seen playing on the track.) pic.twitter.com/RT4rGowurB

With less than two months until the grand opening, Toy Story Land’s construction is nearing completion at Disney’s Hollywood Studios. This photo report, with shots provided by our contributor, @bioreconstruct on Twitter, checks out the finishing progress on this upcoming land.