Lee Cockerell, former Walt Disney World vice president, will be the “Be Our Guest” speaker at the next Disneyana Fan Club meeting in Kissimmee, Fla.

END_OF_DOCUMENT_TOKEN_TO_BE_REPLACED

D23 Gold Members have the chance to celebrate “Star Wars: The Last Jedi” on opening day with an exclusive, members-only experience on The Walt Disney Studios lot on Friday, Dec. 15. END_OF_DOCUMENT_TOKEN_TO_BE_REPLACED 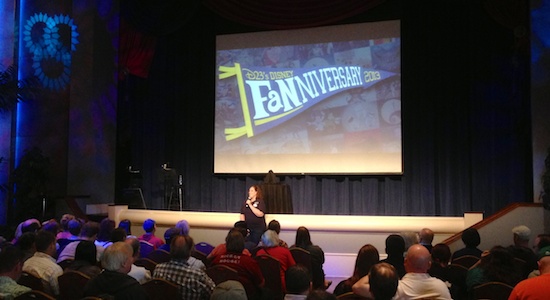 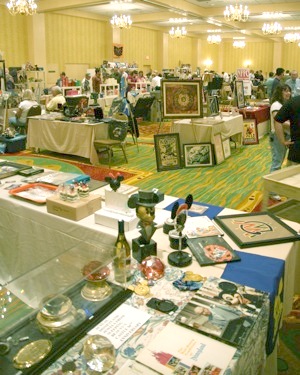 The NFFC (National Fantasy Fan Club) is holding their All Disneyana Show and Sale from 10 a.m. to 4 p.m. this Saturday, Dec. 12, 2009. The Regal Sun Resort will become the place to be for Disneyana collectors, autograph seekers, and the just plain Disney crazed, as Disneyana memorabilia vendors and dealers from all over the country exhibit their wares along with several well known authors signing their Disney related books.

We’ll be manning a table and should have the newest issue (Winter 2010), as well as back issues for sale. Come by and be one of the first to read the newest issue. We’ll also be giving away some free postcards featuring stylized versions of our covers. Stop by and say hello. We hope to see you there.

The Regal Sun Resort (formerly the Grovenor Resort) is at 1850 Hotel Plaza Boulevard, beside Downtown Disney. Those attending the NFFC Holiday Extravaganza can get in early at 9 a.m. NFFC members can get in at 9:30. The general public will be allowed in at 10 a.m.

Here are more details on the charter member-only special events:

May 28 D23 “Up All Night” at Hollywood’s El Capitan Theatre (FREE)
(Los Angeles, CA) — Theatergoers across the country will soon meet the unlikely duo of 78-year-old Carl Fredricksen and 8-year-old Wilderness Explorer Russell in Disney Pixar’s latest
adventure, Up. D23 Members will be among the first to see the film at this free event at the historic El Capitan Theatre in Los Angeles on May 28, 2009. The fun begins with a special pin trading event, followed by an all new Disney stage show and a screening of the new Disney-Pixar short Partly Cloudy and the highly anticipated and critically acclaimed Up! And it wouldn’t be a D23 event without a few other special surprises and guests!

May 31 D23’s Flowers & Fireworks Celebration at Epcot (FREE with park admission)
(Orlando, FL) – Join D23 at Epcot at the Walt Disney World Resort to celebrate its members in all 50 states and more than 25 countries worldwide! Start the evening at the American Gardens Theatre with reserved seating for the Flower Power Concert Series Finale, starring the legendary Tony Orlando, to close the Epcot International Flower & Garden Festival. Next, head to a VIP location to mix and mingle with your fellow D23 members over desserts and coffee, and then enjoy the spectacular nighttime extravaganza IllumiNations: Reflections of Earth from a private viewing area.

June 24 D23’s Supercalifragilistic Night on Broadway
(New York, NY) — Disney’s award-winning musical Mary Poppins recently celebrated its 1,000th performance on Broadway and on June 24, 2009, D23 Members are being offered the opportunity to meet one another and share in the magic with premium seats, merchandise discounts and an opportunity to stay after the show for a special “behind-the-scenes” experience at the historic New Amsterdam Theatre in New York City. D23 Members also will
receive the recently released 2-Disc Mary Poppins 45th Anniversary Special Edition DVD, courtesy of our friends at Walt Disney Studios Home Entertainment.

June 24 D23 and Poppins Breeze into The Windy City
(Chicago, IL) — Mary Poppins blew into the Windy City on March 25, 2009 and original Broadway stars Ashley Brown and Gavin Lee have been delighting audiences at the Cadillac Palace Theatre ever since. On June 24, 2009, D23 Members will have the chance to experience the “practically perfect” Mary Poppins like never before, with premium seats, merchandise discounts, complimentary souvenir program and a once-in-a-lifetime “behind-the-scenes” experience. D23 Members also will receive the recently released 2-Disc Mary Poppins 45th Anniversary Special Edition DVD, courtesy of our friends at Walt Disney Studios Home Entertainment.

June 27 D23 and The Lion King Roar in Vegas
(Las Vegas, NV) — After entertaining more than 45 million guests in theatres around the world, Simba and Nala have roared their way onto the world famous Las Vegas Strip. On June 27, 2009, D23 will host a special night at the Mandalay Bay Resort in Las Vegas, with premium seating for The Lion King, a “behind-the-scenes” experience and more, available exclusively to D23 Members.

Sept TBD The Walt Disney Family Museum Preview (FREE)
(San Francisco, CA) – Prior to its October 2009 Grand Opening, D23 members will have the opportunity to experience The Walt Disney Family Museum, celebrating the life an achievements of the man who raised animation to an art, transformed the film industry, tirelessly pursued innovation, and created a global and distinctly American legacy. This special preview will be hosted by the Museum’s Executive Director Richard Benefield. Dates and details will be available soon.

To find out more about D23’s Summer 2009 Special Events Calendar, including admissions and how to register for events, visit www.disney.com/D23 and click on the “Expo & Events” tab.

All D23 Special Events are subject to change without notice, have varying admission fees and registration processes, and may require advance reservations due to space limitations.

In addition to D23’s inaugural slate of special events, the fan community is also pleased to announce its first Member-only contest. This summer, one lucky D23 Member and a guest will have the chance to win an incredible getaway package to join the pack at Pride Rock and see The Lion King in Las Vegas including 2-nights accommodation at the Mandalay Bay Resort and much more. To enter, D23 Members are being asked to tell us what they love most about The Lion King in 300 words or less. A complete list of rules/ regulations and more information will be available at www.disney.com/D23 in early June.