Hosts Banks Lee and Elisa Goldman bring you this week’s theme park and attraction news. On this week’s episode: END_OF_DOCUMENT_TOKEN_TO_BE_REPLACED 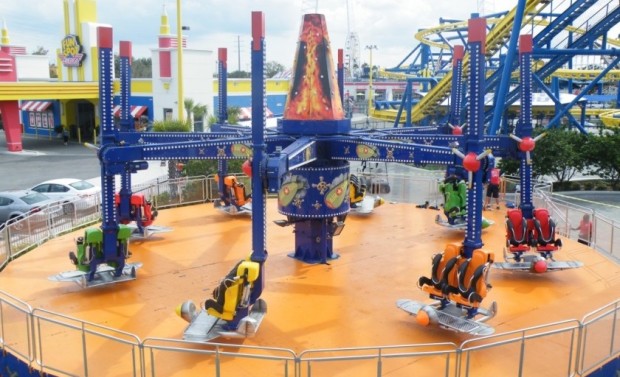 A new ride is opening at Fun Spot America in Orlando this Halloween. It’s called Air Raid and it will send you spinning in more ways than one. END_OF_DOCUMENT_TOKEN_TO_BE_REPLACED

At Disney’s D23 Expo in Japan, new details were announced and concept art shown for the new Avatar Land at Disney’s Animal Kingdom, and separately, a new nighttime show was announced for the park. END_OF_DOCUMENT_TOKEN_TO_BE_REPLACED

(This was cross-posted on the Distant Creations blog)

Prior to moving to Orlando, I had a to-do list of thrilling activities that I wanted to try some day. It included skydiving, learning to fly an airplane, and zip lining through an exotic forest (amongst others). Having now lived in Orlando for several years, I’ve found that my cravings have changed a bit and so today I ponder…

How Orlando Attractions Have Altered My Thrill To-Do List

High on my list of daring “I want to try that one day” items has always been skydiving. I know a few people who have done it with mostly positive reactions. So, I jumped (pun intended) at the chance to take a baby step toward this death-defying activity by visiting SkyVenture Orlando:

Yes, that’s me halfway through that video trying out SkyVenture’s wind tunnel, which apparently provides a very accurate simulation of real skydiving. Was it fun? Yes. Would I recommend it for those interested in skydiving? Yes. Did it make me want to really skydive? No. In fact, quite the opposite.

After visiting SkyVenture, my desire to skydive is more or less gone and removed from my thrill-filled to-do list.

Getting a pilot’s license is something I’ve wanted to do since I began playing flight simulators many years ago. Anyone who regularly reads this blog knows that I’m a huge flight sim fan and thus it seems like an obvious choice to take that interest and move it into the world of real-life, non-simulator flight. So, much like with my desire to skydive, I jumped (definitely no pun here) at the chance to hop into a vintage aircraft and take the controls at Warbird Adventures:

Yes, that’s me throughout that video, hopping into the front seat of the cockpit and even taking the controls for most of the flight. In other words, I got to fly a real airplane without going through hours of training or even getting a pilot’s license. Was it fun? Absolutely. Would I recommend it for those interested in becoming a pilot? Definitely. Did it make me want to get my pilot’s license and fly more? Oh yeah.

After visiting Warbird, my desire to fly real airplanes has increased. It was one of the most fun activities I’ve done in Orlando outside of a theme park. That one is definitely staying on my to-do list.

Every time I see an exotic South American location on the Travel Channel featuring a massive zip line through a forest, I think, “Wow – I want to try that!” On TV, the experience looks both thrilling and relaxing at the same time. So, I quickly jumped (sort of a pun) at the chance to try out Florida’s first and only zip line experience at Forever Florida:

No, that’s not me at any point in that video. While I do have video of me zip lining, I didn’t include any of it as I look like a complete goofball while doing it. Regardless of my outward appearance, my initial thoughts that zip lining would be both thrilling and relaxing were pretty accurate. Was it fun? Yep. Would I recommend it for those interested in zip lining? Sure would. Did it make me want to fly to South America and go on a taller, longer zip line through a forest? Not particularly.

After visiting the Zipline Safari at Forever Florida, I realized that zip lining isn’t quite as fun as I thought it would be. I’m sure being in an exotic location would heighten the experience over gliding through Florida’s natural ecosystems that I’ve seen my entire life. If I happened to be somewhere that had a zip line, I’d give it a go. I just wouldn’t make a special trip out of the country to do it. Zip lining is now lower on my to-do list.

Car racing has never been on my to-do list. I’m not interested in watching cars race. I’m really not interested in cars at all. Even car racing video games bore me after a few minutes of driving in circles. Nonetheless, I jumped (a pun wouldn’t even make sense here) at the chance to climb into a stock car and an Indycar and race around the Walt Disney World Speedway:

Yes, that’s me in the passenger seat of one of those cars zipping by at over 100mph. I can’t tell you which one because the footage of me was mixed in with footage of other people speeding around the track and the cars are clearly going by way too fast to tell. But I’m there somewhere. Surprisingly, my visit to the Walt Disney World Speedway actually increased my interest in racing. I’m not going to sit down and watch all 500 laps of the Indy 500 or anything, but I do have a newfound appreciation for the sport. Was it fun? Yes. Would I recommend it for those interest in auto racing? Without a doubt. Did it make me want to go back and try actually driving the cars instead of just riding in the passenger seats? Yeah, actually it did.

While I had no previous desire to ever try auto racing around a track, trying out the racing experiences at the Walt Disney World Speedway introduced me to a new thrilling activity that I hadn’t really considered before. It’s now on the to-do list.

So here’s how has Orlando changed my thrill-filled to-do list:

Flying / Getting a Pilot’s License – More interested than ever.

Zip Lining – Still interested, but not nearly as much.

I still have plenty of other thrilling activities on my to-do list and I’m sure if I look hard enough, there’s an attraction somewhere in Orlando that will replicate the experience for me without as much of the expense or risk as the real thing. I’ll keep you posted.

If you want to know more about SkyVenture Orlando or Warbird Aventures, read my “Take to the Skies” article in Volume 1, Issue 5 of Orlando Attractions Magazine.

To find out more about the Walt Disney World Speedway racing experiences and the Zipline Safari at Forever Florida, read my two articles, “Vehicular Velocity on Vacation” and “Hangin’ Around Orlando,” in Volume 2, Issue 2 of Orlando Attractions Magazine.

What’s on your thrill to-do list? What thrilling activities have you done in Orlando that changed your desire to do the “real thing”? Comment!