The Spring 2019 issue of “Attractions Magazine” is now available in print, on the Nook and Kindle and soon in our iPhone and iPad app. Click Here to order your copy. END_OF_DOCUMENT_TOKEN_TO_BE_REPLACED

Prior to today’s announcement, Brandon Peters was in entertainment as a performer and part of the 2016 Disney University Traditions team, while Ken Facey served as a leader at Disney’s Grand Floridian Resort & Spa, supporting the housekeeping and custodial team.

“Today we selected two cast members who will continue the tradition of bringing to life the values that make Disney special, such as innovation, optimism and exceptional service,” said George A. Kalogridis, president of Walt Disney World Resort. “As they represent more than 74,000 cast members who call Central Florida home, Ken and Brandon will share our heritage and legacy with our guests, cast members and community.” 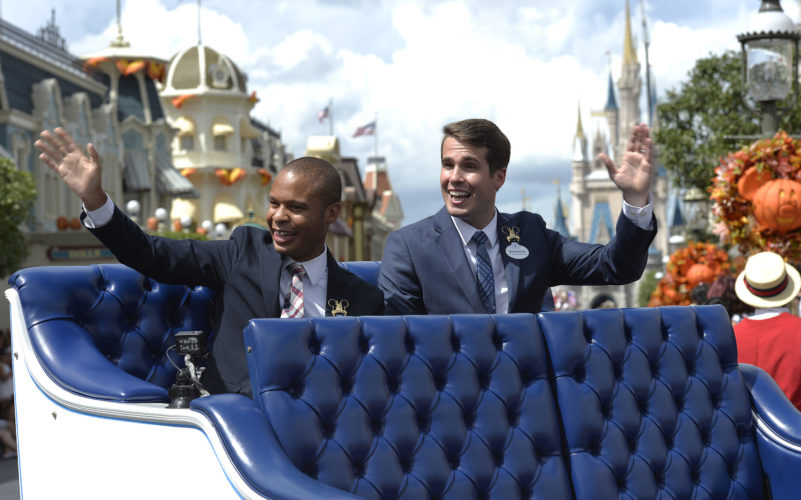 Growing up in Brooklyn, N.Y., Ken joined the Disney College Program as an attractions host in Tomorrowland at Magic Kingdom Park. Since then, Ken has worked in operations, guest relations, lodging and custodial guest services. Along the way, he served the Disney University Traditions program, and also spent time as a guest correspondent, responding to letters from guests.

Every two years, thousands of cast members are invited to participate in the ambassador selection process, which includes several rounds of interviews. Following a three-month training in Florida and California, the team will begin their two-year term, which lasts from Jan. 1, 2017 – Dec. 31, 2018. With thousands of events to attend throughout the year, the Ambassadors are responsible for duties such as championing the Disney VoluntEARS program, supporting company programs and business initiatives, serving as master of ceremonies at park events and recognizing cast members’ milestones and achievements.

The Disney Ambassador tradition began during the 10th anniversary of Disneyland, when Walt was overwhelmed with requests for appearances and media interviews. Since he chose the first Disney Ambassador to serve in 1965, the program has evolved to represent the company, its cast members and ideals throughout 50 years of Disney milestones.

Watch this episode of “Attractions Magazine – The Show” for a look at the 2014 Disney Ambassador ceremony: