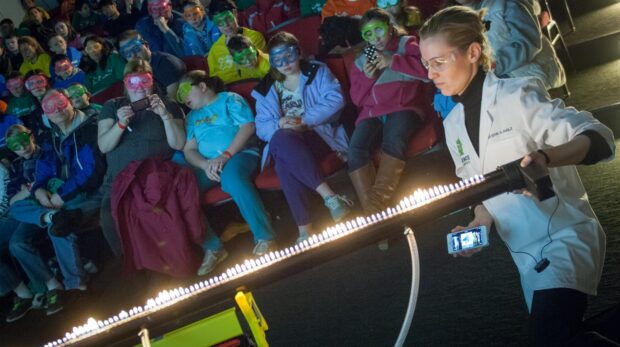 Join Raytheon at Epcot during National Engineers Week Feb. 17-21, 2014 to discover the wonders of science through hands-on experiments led by real scientists. END_OF_DOCUMENT_TOKEN_TO_BE_REPLACED

Hosts Banks Lee and JeniLynn Knopp bring you this week’s theme park and attraction news. On this week’s episode: END_OF_DOCUMENT_TOKEN_TO_BE_REPLACED 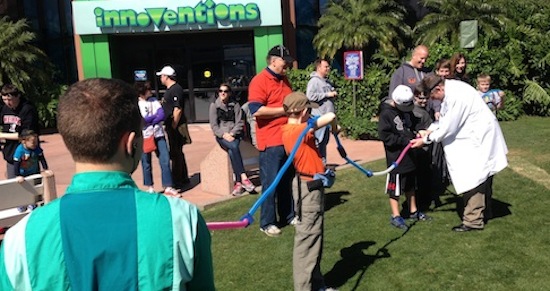 As part of Engineers Week, Raytheon, the company behind the Sum of All Thrills attraction in Innoventions at Epcot, is holding daily hands-on demonstrations teaching just what makes a roller coaster work. END_OF_DOCUMENT_TOKEN_TO_BE_REPLACED

As revealed to Disney cast members via their online web portal called the Hub, Walt Disney Imagineering is working with Raytheon to develop a new motion simulator attraction for Innoventions at Epcot.

The attraction is called “The Sum of All Thrills” and will allow guests to design a roller coaster, jet plane, or bobsled ride using real-life physics and engineering and then ride it within a robot arm-based simulator.

The exhibit is being described as feeling “like a high-tech laboratory” and is said to try to emphasize to guests “that math can be cool.”

In customizing the ride as part of the experience, guests will use a multi-touch surface table which can sense human interactions and objects placed upon it. Similar technology is currently being used inside the House of Innoventions at Disneyland in Anaheim, CA.

Once the ride is customized it can be ridden by guests in a simulator on the end of a KUKA robotic arm, created by German-based KUKA Roboter GmbH. The robot arm is similar to the one currently being used to control the menacing angler fish in Epcot’s The Seas with Nemo and Friends attraction, though it is the first time a robotic ar is being used as the ride system in a Disney theme park.

The arm pictured here dates back to 2002, as created by the KUKA Robot Group. It is expected that the Disney version of this ride will be a fully enclosed simulator, similar to Cyber Space Mountain in DisneyQuest at Downtown Disney, but with many more possible degrees of movement as a result of being attached to the KUKA arm.

In addition to the experience at Epcot, Raytheon will be supporting another 2009 initiative at the Walt Disney World Resort – the 2009 Raytheon MathCounts National Competition. Taking place May 7 to 10, 2009, at the Walt Disney World Swan and Dolphin Resort, the competition is the culmination of an enrichment and coaching program that promotes middle school mathematics achievement in every U.S. state and territory. Raytheon is the title sponsor of the MathCounts National Competition for the next three years, through 2011.

The new Innoventions exhibit is scheduled to open in late 2009.

UPDATE: (4/17/09) There have been reports/rumors online that Universal Studios obtained theme park-exclusive rights to the KUKA robotic arm technology for 10 years. A Disney PR rep told me that Universal and KUKA Roboter do not have such an agreement. He pointed out that the Rockin Robots exhibit currently in Innoventions also already uses the KUKA arms.