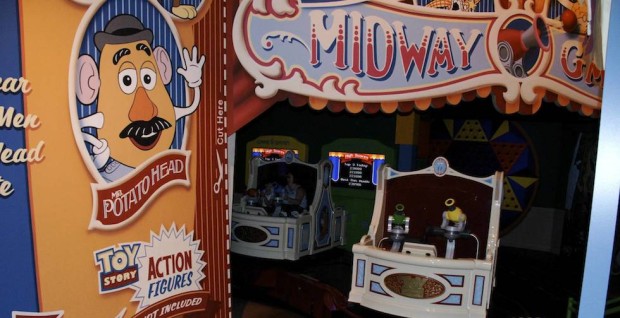 Don’t expect to ride Toy Story Midway Mania at Disney’s Hollywood Studios over the next few days unless you can secure a FastPass+. Disney is running a test through Thursday that removes the standby line. END_OF_DOCUMENT_TOKEN_TO_BE_REPLACED 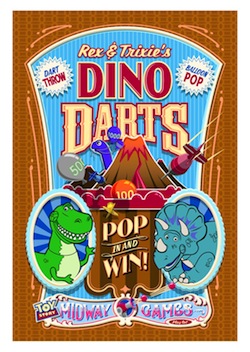 One nice aspect of virtual games such as Toy Story Midway Mania is that they’re easily changeable. There will be no long refurbishment down-time when Disney adds a new dart game to the Hollywood Studios attraction.

“Rex and Trixie’s Dino Darts” will replace “Bo Peep’s Baaa-loon Pop” as part of a promotion for the new Toy Story 3 movie coming out June 18. Trixie (a blue triceratops) is friends with Rex (a green dinosaur) in the new movie.

The game will have guests shooting virtual darts at balloon targets in a primeval world of volcanos and lava. Some other changes in the ride include: The “Hamm & Eggs” game will now be hosted by Hamm and Buttercup (a toy unicorn with heart-shaped nostrils). In the prize scene, Trixie, Buttercup, Dolly (a doll), Mr. Pricklepants (a lederhosen-clad hedgehog) and one other surprise – all from “Toy Story 3” – will appear with Woody and Jessie. As with the other 3D games in Midway Mania, you’ll probably find some other hidden surprises.

Pixar Animation Studios is creating animation of the new characters plus animation for Rex and Trixie’s Dino Darts. New music – a dino-themed version of Randy Newman’s You’ve Got a Friend in Me – comes from veteran music editor and Newman collaborator Bruno Coon, who did the original music for the attraction.

The changeover will happen sometime in late May, although an exact date hasn’t been released. The attraction in California Adventure will also receive the update.

We’ve previously reported on another Toy Story 3 promotion at Disney’s Hollywood Studios. The new character Lotso will start making appearances on May 9.