A classic Magic Kingdom experience is coming to an end, as Disney has confirmed that Sorcerers of the Magic Kingdom will shut down later this month.

END_OF_DOCUMENT_TOKEN_TO_BE_REPLACED

Disney Theme Park Merchandise is introducing a new trading card game in August that is based on Sorcerers of the Magic Kingdom. This at-home game includes a way to obtain those super rare spell cards plus a whole bunch more.

END_OF_DOCUMENT_TOKEN_TO_BE_REPLACED 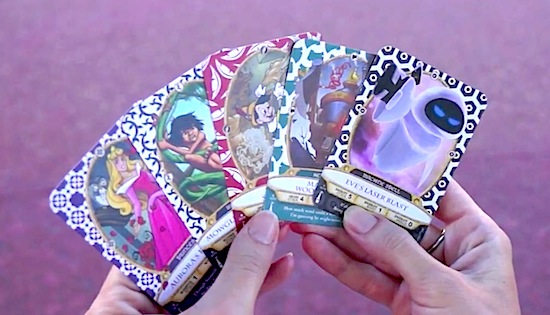 The new Sorcerers of the Magic Kingdom game is currently testing at the Magic Kingdom park at Walt Disney World. It’s a role-playing, trading card game which has guests trying to defeat Disney Villains who are working to take over the theme park. Armed with magic spells in the form of special cards, players must go to the magic portals throughout the park that lead them to the animated villains’ hiding places.

By casting different magical spell cards, guests can do battle with Yzma, Scar and other ne’er do wells hiding throughout the land. From fireballs to frantic frogs and cyclones, there are spells to bring down each and every villain. But just how many different spell cards are there? (UPDATE: Disney has confirmed there are 70 different cards) And how can you collect them all? Below we’ll tell you all we know about the game and try to compile a list of all the cards. END_OF_DOCUMENT_TOKEN_TO_BE_REPLACED