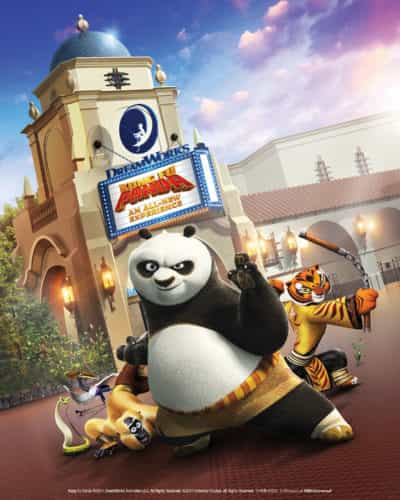 The big green ogre is on his way out, but his animated cousins are coming in, as Universal Studios Hollywood has announced a new Dreamworks Theatre attraction featuring Kung Fu Panda will replace Shrek 4-D in 2018.

Last month, Universal Studios Hollywood announced that its Shrek 4-D attraction would be closing on August 13, and today we learned about the new Dreamworks Theatre attraction that will replace it. Opening in 2018, this newly designed venue will play host to a variety of Dreamworks Animation themed attractions beginning with the multi-sensory adventure inspired by the franchise Kung Fu Panda, and created in partnership with Universal Creative and Dreamworks’ artists. This new technologically advanced attraction will take guests on a “legendary journey” that fuses storytelling with state-of-the art projection mapping and LED lighting effects.

The new Dreamworks Theatre will rework the former Shrek 4-D building, transforming it from a castle into an art deco cinema with a classic marquee and a lobby full of movie poster. While the new Dreamworks Theatre will debut with Kung Fu Panda, the attraction is designed to host additional features, and could potential rotate seasonally (or even during the course of the day) through various Dreamworks Animation short features.

Beginning in summer 2017, additional Dreamworks characters will join Universal Studios Hollywood to entertain guests and pose for photos. Newly introduced characters will include: Kung Fu Panda’s Po and Tigress; Madagascar’s Alex the Lion, The Penguins—Skipper, Rico, Kowalski and Private, and King Julian; Trolls’ Poppy and Branch; Shrek’s Puss ‘n Boots will join existing characters Shrek and Fiona, who will remain in the park after their attraction closes. The DreamWorks characters will greet guests and host “dance jams” daily at the central Universal Plaza near the Dreamworks Theatre, which is being redesigned with a stage and photo-op backdrops.

In addition to the Dreamworks characters, popular Japanese anime icon Hello Kitty will begin greeting Universal Studios Hollywood guests in person during 2018. Hello Kitty and her signature red bow, along with more Sanrio friends including My Melody, Keroppi, and Chococat, will be featured on park-exclusive merchandise including accessories, apparel, collectibles, and confectionery. Exclusive product offerings include designs incorporating classic Universal titles such as Jaws, ET, Back to the Future and more.

No announcement has been made at this time about Universal Studios Florida’s Shrek 4-D attraction, but Hello Kitty already appears in Orlando outside her own store.