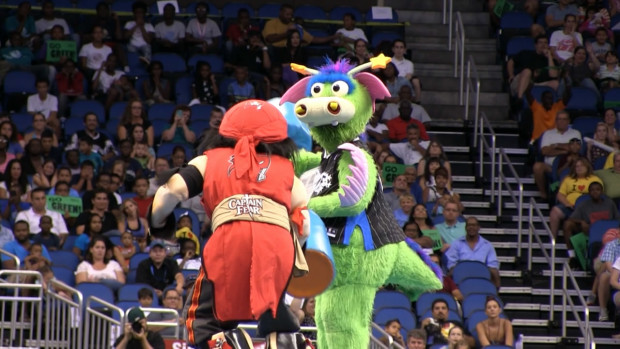 New Hope for Kids has announced all the mascots that will compete in the 22nd Annual Mascot Games, happening this weekend in downtown Orlando.

Twenty-four popular mascots from across North America will join the Orlando Magic’s Stuff, the event’s host mascot, for the annual competition taking place at the Amway Center June 19 at 12:30 p.m. and June 20 at 2 p.m. Mascots from MLB, NFL, NBA, NHL, MLS, and NCAA will be divided into four teams as they compete against each other in wild and wacky games to determine the true champions of the mascot world.

“The collection of Mascots that will be showcased at Amway Center will be unrivaled anywhere in the world,” said Dave Joswick, Executive Director of New Hope for Kids. “Our ambassador, Orlando Magic’s Stuff, has invited top notch talents, all who love to compete, and who also love knowing they’re helping kids.”

The games will once again be emceed by Scotty B. Adding to the craziness on the field, each Mascot team will have a “celebrity coach” that will help manage the team and push them to victory. Coaches for the June 19 show include: WFTV sportscaster Christian Bruey, Orlando Sentinel sports columnist George Diaz, and 740 The Game radio personalities Ditti and Doc. Coaching duties for the June 20 show will be entrusted to the Monsters from Real Radio 104.1: Russ, Dirty Jim, Angel and Carlos. Each show will feature a halftime act highlighting local talent, with the June 19 performance by Gina Incadela and the June 20 performance by Project DJ Slam, featuring Blake Guyre.

General admission tickets start at $12 and can be purchased through MascotGames.org, AmwayCenter.com, Chase Box Office at Amway Center, Ticketmaster retail locations, charge-by-phone at 800-745-3000 or at Ticketmaster.com.

All proceeds from the Mascot Games benefit New Hope for Kids, which provides support to children and families grieving the death of a loved one, and grants wishes to children with life-threatening illnesses in Central Florida. Since its inception, the event has raised more than $300,000 for New Hope for Kids.

For a look at last year’s Mascot Games, watch out Aug. 7, 2014 episode of Orlando Attractions Magazine: The Show below: