This week has been loaded with videos teasing the mystery surrounding Ms. Vayne, the icon for this year’s annual Howl-O-Scream event at Busch Gardens Tampa Bay.

Yesterday, we received an interesting gift by special delivery, presumably from Ms. Vayne: 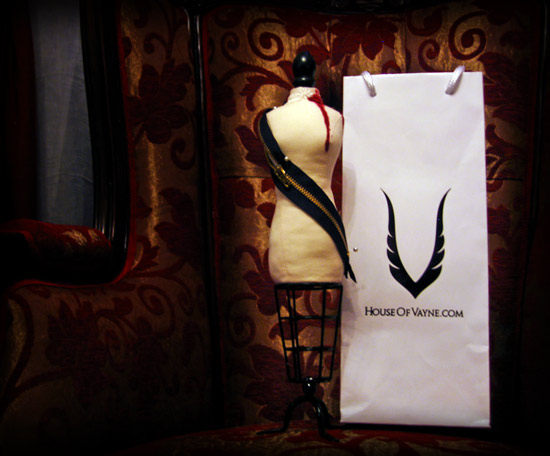 This miniature padded torso, around 12″ tall, arrived adorned with a metal zipper surrounded by a leather-like fabric, which is rather indicative of Ms. Vayne’s unique fashion style. More surprisingly, however, the torso’s neck has two bite marks with what appears to be blood running down from them.

Our initial thoughts as to what the bite marks meant were confirmed by the official premiere of the commercial for this year’s Howl-O-Scream event, revealing Ms. Vayne’s true nature:

More details surrounding this year’s Howl-O-Scream have emerged on their official Web site, including names and descriptions of the haunted houses, scare zones, shows, and a new 21+ dance club called Club Envy, which features the same House of Vayne “winged” logo that’s seen on the bag pictured above. The club is described as a “killer party” that includes cocktails, character meet-and-greets, and a “happy hour” with hors d’oeuvres and early access to the houses.

And for those of you who want to know all about what it takes to create Howl-O-Scream each year, we’ll be featuring the event in a Halloween-time article in our upcoming Fall 2009 issue of Orlando Attractions Magazine, so subscribe today be one of the first to receive it.

I think Ms. Vayne and Sylvie should come back in like a showdown. Ms. Vayne and her models vs. Sylvie and her bandmates. They go head to head in a battle of the scares! I dunno, maybe thats just me but it sounds interesting.