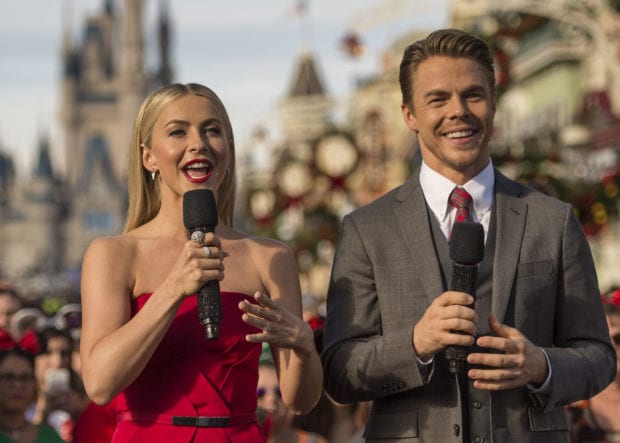 After kicking off the holidays with two new broadcast specials on Thanksgiving, Disney Parks will close out 2016 with its annual Christmas Day celebration.

“The Disney Parks’ Magical Christmas Celebration” airs Dec. 25, 2016 on ABC from 10 a.m. to noon EST (airtimes vary; check local listings) and on the ABC and the Disney Channel apps.

Ushering in its 33rd year are the brother-sister duo from “Dancing with the Stars,” Julianne Hough and Derek Hough, who will present the two-hour ABC special from the Walt Disney World Resort. The celebration culminates with the fan-favorite Christmas parade delivered by Disneyland correspondent, Good Morning America’s Jesse Palmer from the parade lines alongside other celebrity guests.

Beyond offering an all-star performance, the program will provide viewers with a necessary holiday reminder: the importance of family togetherness. Following the inspirational stories of the families introduced in the Thanksgiving Day special, the telecast will feature heartwarming moments between loved ones, reinforcing the notion that Christmas is all about friends and family coming together.

Taking viewers on a magical ride down Main Street U.S.A. and beyond, the Christmas Day festivities will be bigger and brighter than ever before. A complete list of musical performances is included below:

The 33rd annual Christmas celebration airs nationwide on Dec. 25 at 10 a.m. EST and 9 a.m. CST, MST and PST on ABC. The show will also be available on the ABC and the Disney Channel apps. To stay updated on the Christmas Day telecast on social media, follow along with the #DisneyChristmasCelebration hashtag.

This event used to be a whole lot better. Frankly, a lot of us now find it boring; too much about trhe performances and too little about Disney.

I agree with Jason, I liked it better when it was basically a 2 hour commercial for the parks with a few performances. Now when they show you some attractions it is only for a few seconds then off to another performer Lip syncing.

Subscriber Exclusive: The Attractions Podcast – Our...