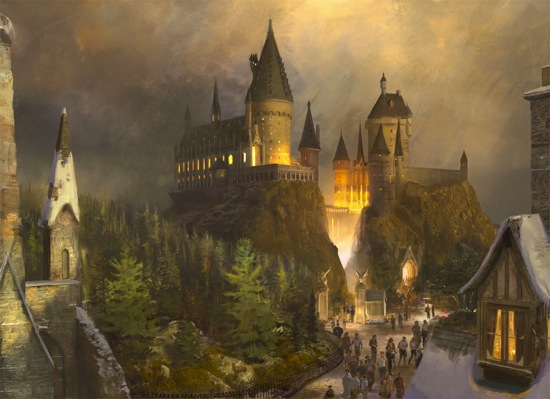 Wizarding World: The famed Platform 9 ¾ is where Harry and his wizarding pals hop aboard the steaming Hogwarts Express at the start of each term on their way to their magical school.

Muggle World: The actual platform used for filming was Platform 4 in London Kings Cross station, but Network Rail have erected a Platform 9 ¾ sign and a luggage trolley magically disappearing into the wall to honour the story, which has made Kings Cross station a must see for fans on the Potter circuit.

Wizarding World: Hogsmeade Station is the place where Harry and friends disembark the Hogwarts Express before making the onward journey to Hogwarts School.

Muggle World: Goathland station is a real station in North Yorkshire, England, that was used as the film set for Hogsmeade and Potter fans still flock to get their pictures taken at this now famous landmark. Unfortunately you won’t see Hogwarts in the distance – it was created using special effects.

Wizarding World: The grounds outside Hogwarts where Harry and his classmates have their first ever broomstick flying lesson.

Muggle World: The second largest inhabited castle in England after Windsor Castle, it was used in the filming of the exterior of Hogwarts for the flying lesson scene as well as when Harry crash lands the flying car. Several other locations were also used to film parts of Hogwarts including: Christ Church, Oxford, Durham Cathedral, Gloucester Cathedral and Lacock Abbey, Wiltshire.

Wizarding World: The place where Harry realizes he is a Parselmouth – i.e. fluent in snake speak – during “Harry Potter and The Sorcerer’s Stone.”

Muggle World: The reptile house in the London Zoo was used to film this slithery scene. Why not see if you can discuss the latest in reptilian fashion with a boa constrictor too?

Wizarding World: Though never specifically mentioned in the books, JK Rowling has remarked in interviews that Scotland was the logical setting for Hogwarts School of Witchcraft and Wizardry, the place where the vast majority of Harry and company’s adventures take place.

Muggle World: Scotland is well known for its castles, mansions and noble houses, all of which may have provided Rowling with inspiration for Hogwarts. Glen Nevis was used for some of the Quidditch scenes, and the West Highland Railway was used to film the journey of the Hogwarts Express which also takes in the incredible Glenfinnan Viaduct.

Muggle World: Bulgaria’s White Brotherhood – a group who believe in supernatural beings of great power, collect in the Seven Lakes region of the Rila Mountains to perform a spiritual dance every year. Here, over a thousand people dressed in white robes move slowly around in huge concentric circles. The spectacle is so impressive that Monty Python star and world traveler, Michael Palin, visited to area to film it for his BBC documentary series, New Europe.

Wizarding World: The Emerald Isle is home to many magical creatures in the Potter Universe including Imps, (small mischievous creatures), Porlocks, (horse guardians from southern Ireland) and Kelpies (water demons). Ireland is also well known in the wizarding world for being the proud winners of the 1994 Quidditch World Cup.

Muggle World: Catch a hurling match, which is about as close as a Muggles can get to the sport of Quidditch. A hugely popular sport in Ireland, most towns have a hurling field and team.

Wizarding World: Home to the “Welsh Green” dragon, this species prefers to nest in high mountain regions. It mainly hunts sheep and small mammals but tends to avoid human contact.

Muggle World: Climb Wales’ highest and most famous mountain, Snowdon. A typical climbing party takes around five to six hours to reach the summit and come down again, and if you keep your eyes peeled, you may just catch a glance of a Welsh Green. Pembrokeshire in Wales is also the film location for Shell Cottage, home of married couple Bill Weasley and Fleur Delacour which will be featured in the “Harry Potter And The Deathly Hallows” film.

Wizarding World: Home to the native Norwegian Ridgeback dragon which inhabits the northern mountains, this beast has venomous fangs and feeds on large animals and sometimes aquatic mammals. Hagrid succeeds in hatching a Norwegian Ridgeback egg but eventually gives it to Charlie Weasley who takes the dragon to the Romanian Dragon Sanctuary.

Muggle World: Norway’s mountains and fjords are a paradise for wildlife; we don’t know about dragons, but trolls are a strong part of Norse mythology, said to be devious and fearsome creatures living underground in hills, caves or mountains.

Wizarding World: this eastern European country is home to the Romanian Dragon Sanctuary, a preservation area created for the protection and study of dragons. The largest dragon sanctuary in the Potter universe, it was the preferred supplier of dragons for the Triwizard Tournament.

Muggle World: Transylvania in Romania is well known for its spooky, reputedly haunted castles. Ever since Bram Stoker used it as the setting for his Dracula novel, the region has been shrouded in supernatural folklore and associated with vampires, who also form part of the wizarding world in the Potter series.

Wizarding World: Home to the Woollongong Warriors, one of the strongest Quidditch teams in the Harry Potter Universe and dominators of the Australian Quidditch league, their rivalry with the Thundelarra Thunderers is legendary amongst the Australian magical community as documented in JK’s book: Quidditch Through the Ages.

Muggle World: Woollongong is an obvious reference to very similar sounding Wollongong, a city in New South Wales, Australia, noted for its numerous surfing beaches, scenery and botanic gardens, so no doubt an ideal place for wizards to obtain essential ingredients for their potions.

No Harry Potter fan can omit Edinburgh as part of their tour. It was in this fine city (which is also home of Skyscanner) that JK Rowling completed the first book in her series – “Harry Potter and the Sorcerer’s Stone” – reputedly doing much of the writing in cafes around the city. To the dismay of Potter fans, one of her favourite spots, Nicolson’s Café, has since turned into an all-you-can eat Chinese restaurant. However, another one of JK’s haunts, The Elephant House still stands and a coffee with a bagel here is a must for any Potter Fan.