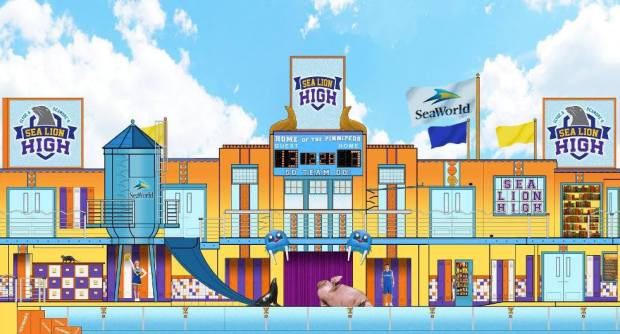 Clyde and Seamore have finally escaped Pirate Island and are on their way back to school in the new show “Clyde & Seamore’s Sea Lion High,” opening spring 2015 at SeaWorld Orlando.

Clyde and Seamore find themselves in slippery pursuit of their high school diplomas and judging from the slapstick, high-energy pranks and hijinks, there’s no doubt they will emerge as heads of their class. When joined by mischievous otters, a 2,300-pound walrus and a cast of human characters, it certainly won’t be a normal class.

“We love putting together a new show,” said Todd Coffman, SeaWorld Orlando’s lead trainer for “Sea Lion High.” “It’s a chance for us to try out the new behaviors we’ve been working on with our sea lions, otters and walrus. And the trainers love showcasing these awesome animals and their incredible abilities.”

It’s the last day of school at Sea Lion High and both Clyde – the school’s top math whiz – and Seamore – the school’s sports hero – are nominated to win scholarships to Sea Lion University. But Trip, who’s the school’s self-appointed varsity star and resident tough guy, has different plans. It turns out Clyde and Seamore haven’t completed all their classes and only have one day to finish them.

Clyde, Seamore and their friends lead the audience on an adventure as they finish their classes with typical sea lion flair. And the audience might uncover a thing or two along the way, following Sea Lion High’s motto, “Education through Exploration and Imagination.” “Our guests will have a great time at the new show, but they’ll also learn about the relationships our trainers have with each sea lion, otter and walrus. And seeing these animals up-close provides each guest with an opportunity to connect and be inspired by them,” Coffman said.

“There are several sea lions in the cast of ‘Sea Lion High’ and each of them bring something special to their role, because their personalities are so different. There’s Seamore, who’s the Einstein of sea lions and who looks at every challenge as something to be conquered. Clyde, is big, strong and loyal but always a little silly. He doesn’t take things too seriously. Imagine working with this cast of characters, from Opie Otter who weighs only 10 pounds, to Sir Winston Walrus who tips the scales at 2,300 pounds, and sea lions that weigh about 550 pounds. That’s a lot of star power on one stage,” Coffman said. “Every day and every show will be a different experience.”

The production team for “Clyde & Seamore’s Sea Lion High” is full of star power, too. BT McNicholl, who’s handling directing and co-writing duties, is a Broadway vet, currently working on “Cabaret” and recently “Billy Elliott” and “Sunday In The Park With George.” McNicholl also directed several of SeaWorld’s shows including the holiday-themed “O Wondrous Night” at SeaWorld Orlando. Court Watson is scenic designer for “Sea Lion High” and is bringing an all-new set to the park’s Sea Lion & Otter Stadium. Randy Rogel is penning the script and original songs, using his experience from TV’s “Animaniacs” and “Batman.”