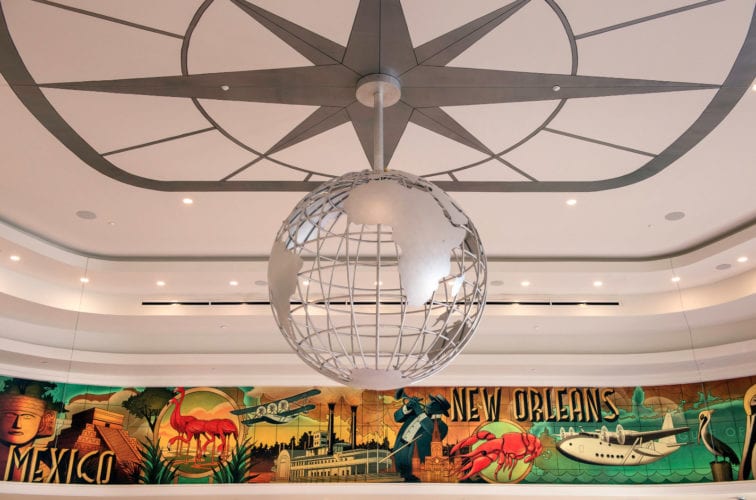 Get a sneak peek inside Maria & Enzo’s on our construction tour of new Patina Group restaurants at Disney Springs.

The Edison, Maria & Enzo’s, and Enzo’s Hideaway are among the most anticipated additions coming to Disney Springs, and thanks to our recent behind-the-scenes construction tour, we have exciting new details to share about the new Patina Group restaurants opening soon on the former Pleasure Island.

On Wednesday, Dec. 13, a select group of media were allowed on a hard-hat tour of the construction site where the finishing touches are being applied to The Edison, Maria & Enzo’s, Pizza Ponte and Enzo’s Hideaway. During our visit, we were allowed inside three of the four venues, and learned new details about the restaurants, which are all expected to open early in 2018. Pizza Ponte, a quick service bakery that will serve breakfast through dessert, specializing in bombolini, tiramisu, Sicilian pizza by the slice, and Italian sandwiches, was not available for us to tour.

The four new Patina Group restaurants are all part of the same interconnected physical structure, which is situated on top of the former site of Pleasure Island’s BET Soundstage (originally the Neon Armadillo) and Adventurers Club. The entrances to the restaurants from the main pathway through what is now known as The Landing at Disney Springs will lead into (from left to right as you face the building) the Pizza Ponte bakery, Maria & Enzo’s restaurant, and The Edison nightclub and restaurant, with Enzo’s Hideaway bar accessed from the rear side under the bridge and along the Lake Buena Vista waterfront.

The entire complex is inspired by a storyline based around the fictitious Disney Spring Air Terminal, an art deco airport from the Golden Age of Travel. The once-bustling transportation hub was shut down in the 1940s, but purchased and preserved by an immigrant couple who owned an adjoining bakery.

All four venues will accept the Disney Dining Plan, though it is not yet confirmed if they will require standard or signature table-service credits. All will also offer standard discounts for Tables in Wonderland, Disney Vacation Club and Annual Passholders. Once reservations are opened, they may be booked via the My Disney Experience app or website, or directly through the Patina Group websites. 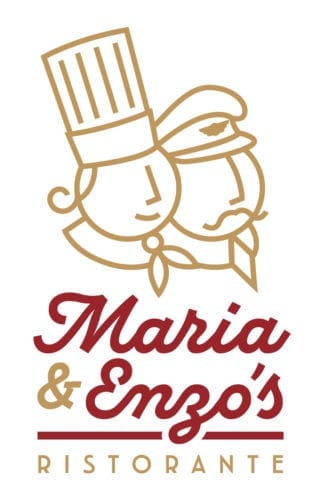 Guest will enter the front doors of Maria & Enzo’s Ristorante and descend a grand staircase into the large main dining room, which looks like a luxury airport terminal, complete with gate number signs above the booths. Floor-to-ceiling picture windows provide a view of the waterfront and the helium balloon ride, and the walls are decorated with an elaborate mural depicting different travel destinations; “New York” is at due north, “Cuba” is on the southern wall, with “New Orleans” and “Daytona” to the west and east. 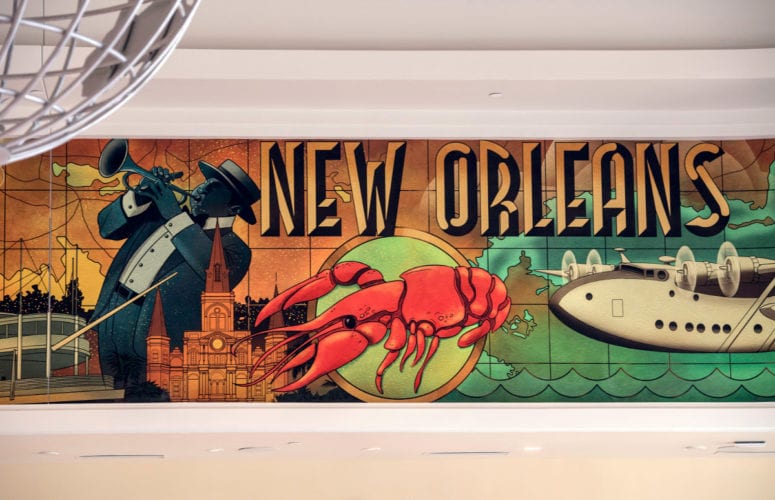 A large globe chandelier suspended from the ceiling displays dots representing the locations of Disneyland, Walt Disney World, and Walt’s hometown of Marceline, Miss. The decor recalls the glamorous “Pan Am” era of air travel, and the period environment has not been aged or distressed, but appears pristine, as the owners kept it, as the storyline goes. 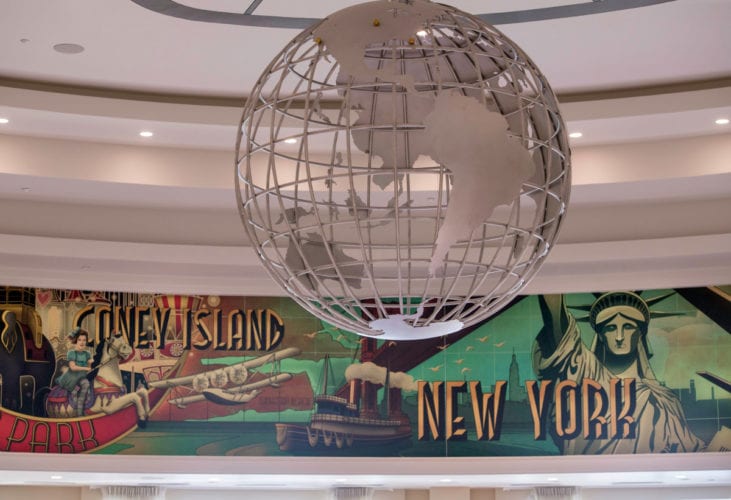 Maria & Enzo’s menu will feature Southern Italian classics like frito misto (fried fish and vegetables) and Arancini di Carne (rice balls filled with meat), as well as homemade pasta and dishes prepared tableside. Executive Chef Theo Schoenegger, who comes to Orlando from Sinatra in Las Vegas, has earned a Michelin star for his previous work with the Patina Group. He will visit the restaurant quarterly, and promises a more elevated experience than what’s currently found in Patina’s restaurants at Epcot’s Italy pavilion. The sommelier from that park’s Tutto Italia Ristorante will transfer to Maria & Enzo’s to oversee the 100+ bottles on their wine list. 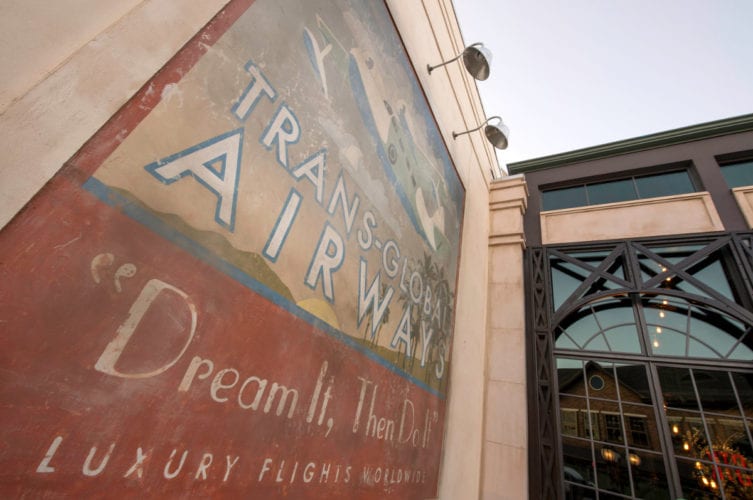 While the restaurant aims to evoke an era when passengers still wore suits and ties on a plane, the dress code will be “elegantly casual,” meaning guests will be allowed to show up in their theme park attire. Lucky guests will be randomly selected at check-in for an upgrade to the “First Class Lounge,” a private dining room (also available for rentals) where diners receive complimentary prosecco for the adults, and Art Deco flight pins for the kids. 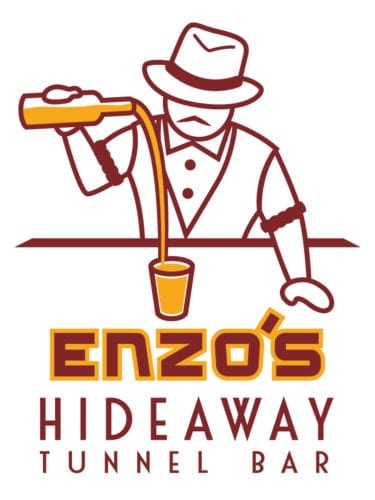 The new Enzo’s Hideaway bar has been built into the authentic “Disney Tunnels” originally built beneath Pleasure Island, similar to the famous Utilidors under the Magic Kingdom. They’ve now been themed as smugglers’ tunnels, used during prohibition by bootlegger to sneak alcohol into the neighboring power plant. 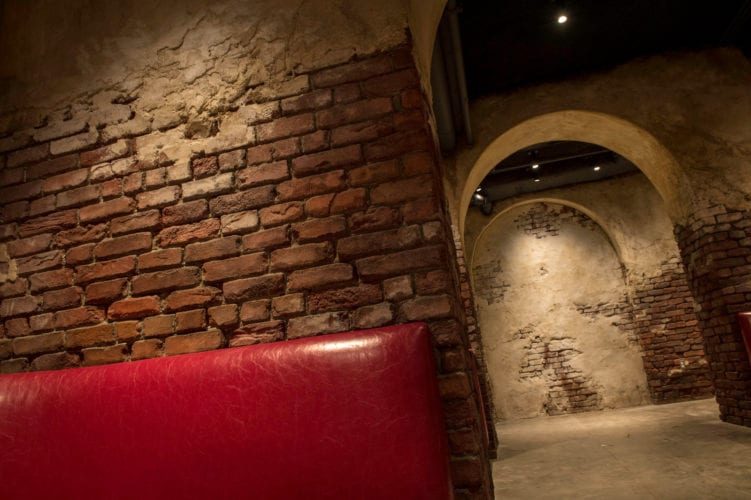 The main entrance into Enzo’s is through a Romanesque archway on the lower waterfront side of the building, beside the bridge to Disney Springs’ West Side. Additional entrances to the bar are “hidden” within Maria & Enzo’s and The Edison. 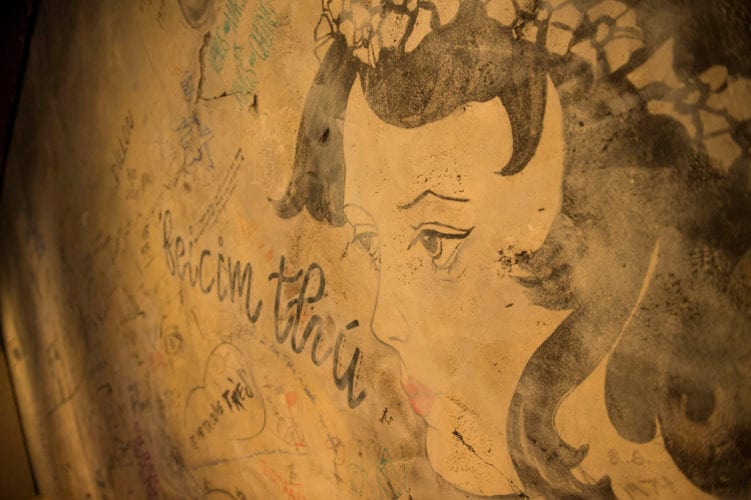 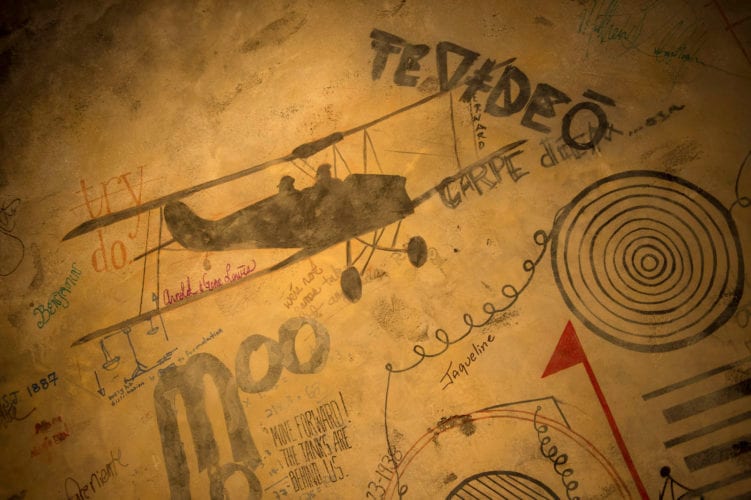 The menu is also Roman-inspired, focusing on cured meats sliced in-house. There will be a weekly “Sunday supper” with no corking fee for bringing your own wine, and a monthly hard-ticket “Smugglers’ Series” dinner with more exotic entrees. The Hideaway’s main draw will be the hipster-friendly craft cocktails, featuring exotic bitters and the largest rum selection in Disney Springs.

No opening date for Enzo’s Hideaway has been confirmed, but it is expected to come after The Edison’s opening. For more about Enzo’s Hideaway, visit patinagroup.com/enzos-hideaway 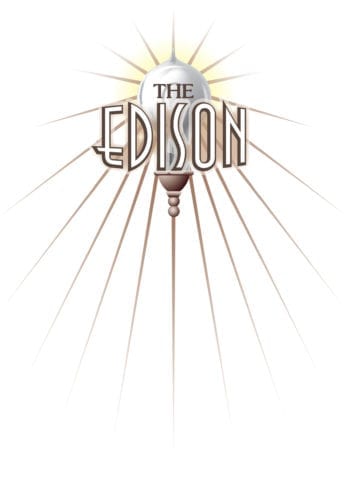 Disney Springs’ incarnation of the popular Los Angeles nightspot is fashioned after an old power plant, with authentic Birchfield “beast” boilers and other antique hardware used throughout. 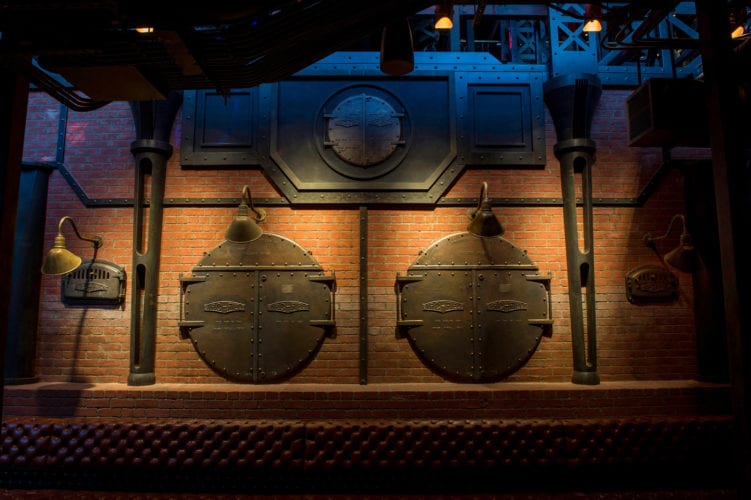 The showpiece is a massive working clock, complete with moving gears, that guests see as soon as they pass through the main entrance. Also look for artistically applied high-water marks on the wall, a secret tribute to real flood damage in the original Edison. 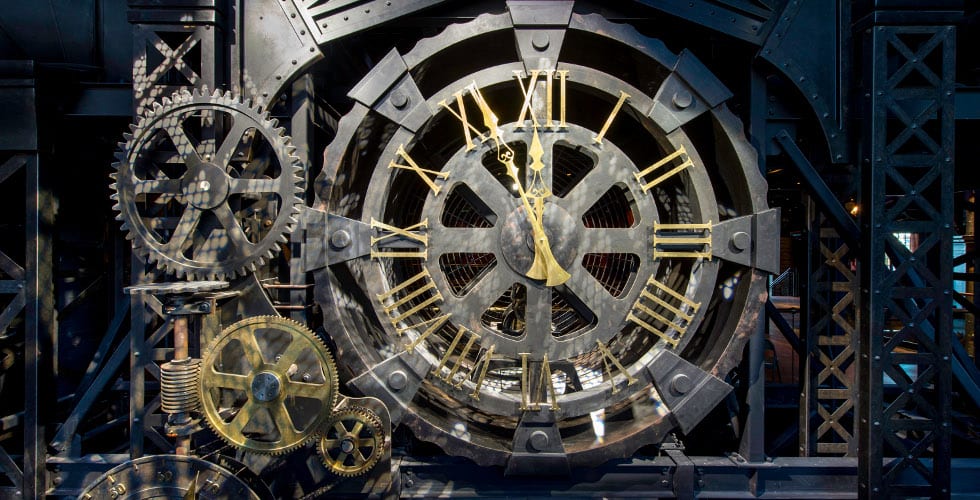 The Edison has two levels, table seating on both with multiple bars throughout, each with their own signature cocktails — including some made of absinthe. For example, the largest bar on the lower level is themed as the “breaker bar” with antique electrical panels, and video projections make certain walls come to life. 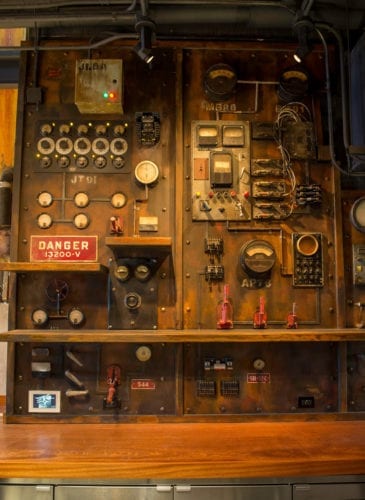 In terms of entertainment, The Edison is fully equipped with a DJ booth and flying rigs for aerial acrobats. The entertainment will be “slightly Disneyfied” in comparison to the Los Angeles location, leaning more towards classic cabaret as opposed to the risque burlesque acts seen in L.A.

While all ages will be welcome in the afternoon and early evening, every night at 10 p.m. the venue will transform into a 21-and-up nightclub, returning late night adult entertainment to the area for the first time since Pleasure Island folded. A cover charge will be levied (cost TBA), and a nighttime dress code will prohibit shorts, baseball caps and flip-flops. A late-night “bartender’s breakfast” menu will also be served after 10 p.m., featuring eggs and other morning staples. 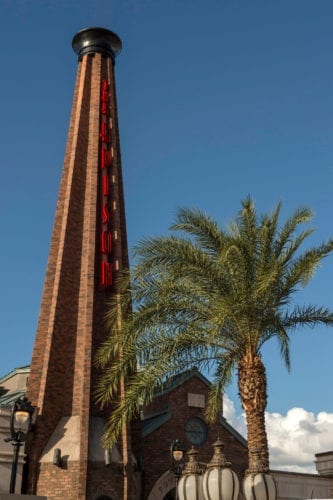 The Edison will hold up to 450 standing guests, or 280 with table seating, and is available for private parties (with optional food and entertainment). The venue will open with a hard-ticket New Year’s Eve party on Dec. 31; tickets are still available online. It will open to all guests with its regular menu on Jan. 1, 2018. For more information, visit theedisonfla.com.