D23 Expo – the official convention for Disney fans, returns to Anaheim this August 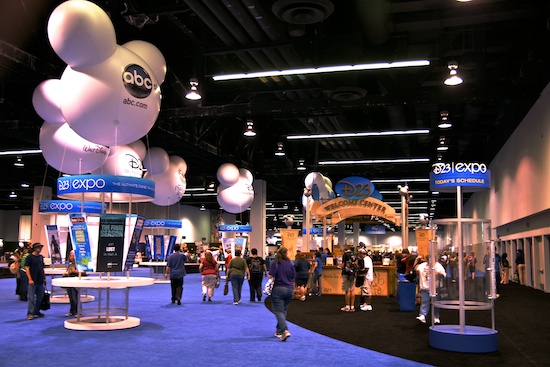 No one knew what to expect when the first D23 Expo was held in 2009. Most fans who attended left amazed and wondering when the next Expo would be held. Now, two years later, the second D23 Expo returns to the Anaheim Convention Center in California from Aug. 19 to 21, 2011.

D23 is the official fan club for the Disney company. The Expo showcases all the company encompasses: movies, theme parks, cruise line, ABC Network, Disney Channel and everything in between. If the 2009 event was any indication, expect to see big announcements, new products, exclusive items and surprise celebrity appearances.

Highlights of the Expo include:

• The Walt Disney Studios will give fans a behind-the-scenes glimpse at the roster of projects on the horizon. From exclusive video clips and live performances to filmmaker discussions and star appearances, audiences will be treated to an up-close look at select movies from the Studio’s upcoming film slate.

• Walt Disney Parks and Resorts will be showcasing its “great big beautiful tomorrow” with a sneak peek at imaginative new experiences in the works for Disney Parks around the world, Disney Cruise Line, Adventures by Disney and Disney Vacation Club.

• The Disney Living pavilion, presented by Disney Consumer Products, will show off the Disney lifestyle through the worlds of Style, Play, Celebrations and more. From the nursery to the runway, from hot toys to cool book apps, favorite Disney characters will come to life in exclusive and never-before-seen products, collections and experiences for Disney fans. Meet the artists, designers, authors and innovators who create the magic and fun, and join in hands-on demos, activities and immersive environments.

• Disney Channel, Disney XD and Disney Junior will jump off the screen at this year’s D23 Expo. Look for special appearances from many of your favorite stars from the biggest shows.

• Radio Disney invites you to join the party as they celebrate the ultimate Disney fan event with music, fun, games and the chance to meet some favorite Radio Disney stars.

• Disney Interactive Media Group pavilion will bring beloved Disney stories and characters to life digitally though new interactive experiences. Guests will be able to try out new and upcoming games for videogame consoles, mobile and online, as well as activities from Disney.com.

• D23 Expo Dream Store will be filled to the brim with D23-themed merchandise and other specialty items from Disney Theme Park Merchandise. From souvenirs and upscale logo assortments to Disney-inspired art and collectibles, ear hats, pins, Vinylmation and more, it will be a Disney enthusiast’s dream come true.

• Disney Fan Art Gallery will feature the creative talents of D23 Members, putting the “spot”-light on One Hundred and One Dalmatians. Disney lovers were previously invited to create work inspired by the animated film, currently celebrating its 50th anniversary. Winners, selected by a panel of Disney’s creative executives, will see their work prominently showcased in the D23 Expo’s Fan Art Gallery, themed to the infamous House of de Vil, inside the Treasures of the Walt Disney Archives exhibit.

• Collectors Forum will be the ultimate Disney marketplace for fans. Collectors, dealers and other vendors will have the opportunity to showcase their collections in this ultimate forum for buying, selling and trading Disney merchandise and memorabilia. This year, in addition to Disney, Pixar and ABC collectibles, the Forum will feature items from the amazing world of Marvel, the newest addition to the Disney family, and Star Wars, in celebration of Star Tours – The Adventures Continue at both Disneyland and Walt Disney World.

• Ultimate Disney Trivia Tournament Presented by Hasbro’s Trivial Pursuit Disney Edition is a new addition to Expo. The eccentric, professorial quack-meister Ludwig Von Drake will preside over the festivities as competitors demonstrate their deep knowledge of all things Disney, including park attractions and shows and parades, past and present; films and TV shows through the years; consumer products, games, company history and, of course, Walt and his family. Trials for the Tournament will take place on Thursday, Aug. 18 at the Convention Center, the day before the Expo opens.

• The Expo will also feature the Disney Legends Awards. Regis Philbin, Muppets creator Jim Henson, the actresses who vocally brought to life many modern-day Disney Princesses including Jodi Benson (Ariel from The Little Mermaid), Paige O’Hara (Belle from Beauty and the Beast), Lea Salonga (singing voices of Jasmine from Aladdin and Mulan from Mulan), Linda Larkin (speaking voice of Jasmine from Aladdin) and Anika Noni Rose (Princess Tiana from The Princess and the Frog) plus other equally impressive contributors to the Disney legacy will be named and honored as official Disney Legends during the D23 Expo at 11 a.m. on Friday, Aug. 19.

• Fans attending the Expo will have access to an exclusive advance screening of The Lion King in Disney Digital 3D, ahead of the film’s highly anticipated theatrical and home entertainment releases, The Walt Disney Studios announced today. The screening will be held Aug. 20 at the convention center

Tickets for D23 Expo are available at a discounted price through June 30. All D23 Members – both Gold level and Silver level – can take advantage of additional exclusive admission savings at D23Expo.com.

If you attend this year’s D23 Expo, be sure to stop by the Orlando Attractions Magazine table in the Collector’s Forum area for a special offer and give-aways. If you can’t make it to California, be sure to follow us here, on Twitter and on Facebook as we bring you up to the minute coverage.