Dancing, art and pyro highlight the opening of D Street at Downtown Disney 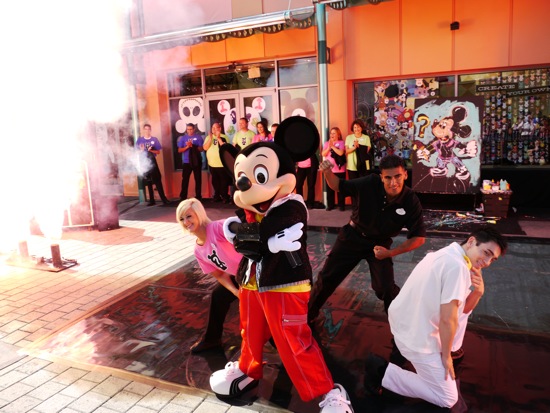 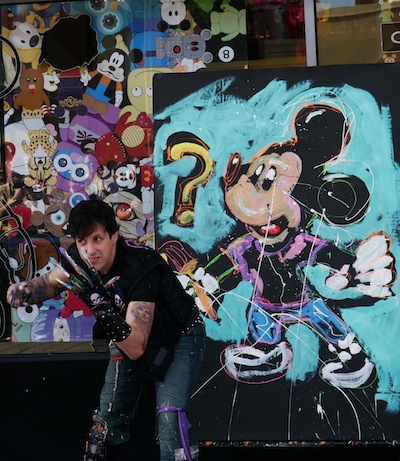 First up, speed painter Rock Demarco created his version of Mickey Mouse on canvas (video below). Then after a few announcements and the introduction of the cast members who’ll be working in the store, a large Vinylmation box was opened. Out came Mickey Mouse showing off his hip-hop dance moves. Then some “cast members” joined him in a great routine that finished with fireworks to open the store (video below). 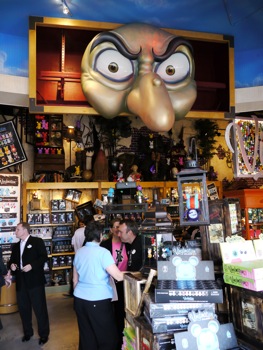 D Street is located in Downtown Disney West Side and showcases a mix of products for men and women. You’ll find all of the currently offered Vinylmation collectibles, including some custom designed one-of-a-kind figures. Some of the customs are for sale and some aren’t. The collectible figures come in a variety of sizes including 1.5- or 3-inch limited-release mystery or open edition boxes, to 9-inch limited-edition figures. The store also features cutting-edge apparel and pop culture novelties.

But the merchandise isn’t the only thing you’ll want to check out inside. The store features an unfinished “industrial look” with fun, oversized props adorning the venue. Look close and you’ll find some hidden Mickeys and some props that used to be featured in the now closed Adventurer’s Club in Pleasure Island.

This new urban-style location is the flagship store for Vinylmation serving as the place for launching the latest releases and trading of this new Disney collectible. A table made with hundreds of Vinylmation figures serves as a trading and creation table for customizing your own figures.

Mickey dances with some “cast members”.

Art Walk, A Canvas of Expression arrives at...

The Attractions Show – Today Cafe at...