‘Deal or No Deal’ coming to Universal Orlando Resort 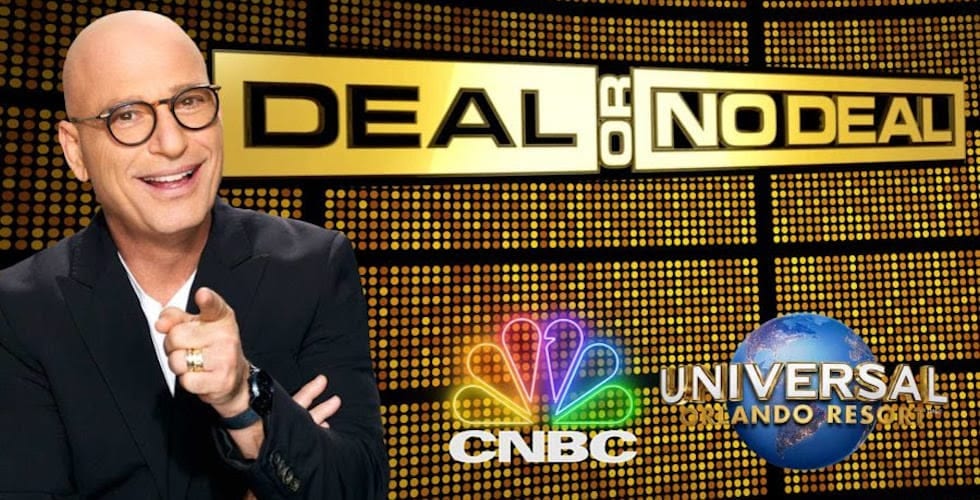 “Deal or No Deal” is returning to CNBC, and will be taped at Universal Orlando Resort.

CNBC has announced that the game show “Deal or No Deal” is returning with original host Howie Mandel, and that it will be taped at Universal Orlando Resort.

On the show, contestants make difficult decisions on which briefcase to open with a chance at winning a great fortune, or losing it all in a moment.

The hour-long show features a contestant who chooses one briefcase from a group of 26, and each one contains a value from $0.01 to $1 million. As the game progresses, the contestant eliminates the other cases and is occasionally offered a “deal” from The Banker to take a cash amount in exchange for quitting the game.

Host Howie Mandel is back to take on The Banker and help contestants decide “Deal or No Deal.”

CNBC’s new season of the game show will consist of 30 original one-hour episodes, joining the networks primetime lineup at the end of 2018.

Starting this July, guests at Universal Orlando Resort can have the chance to be a part of the studio audience and experience the tension of this high stakes game show. More information on how to join the studio audience will be released this summer.

There will be an open casting call for “Deal or No Deal” contestants on Saturday, May 19 at Universal CityWalk from 9 a.m. – 2 p.m. Those interested will head towards the Blue Man Group theater and look for signs pointing toward the Open Casting Call to the left of the theater’s box office. You can also apply to be a contestant online here.

UPDATE: Tickets are now available for “Deal Or No Deal” at Universal Orlando Resort.

Taping will occur on the following dates:

You can sign up for tickets online here. The minimum age to attend is 13, and anyone under the age of 18 must be accompanied by a legal guardian or parent. No guests under the age of 13 will be admitted into the taping.

New ‘Dreaming Up!’ parade marching the streets of Tokyo Disneyland

I think they should do a Husband and Wife Segment!

OH WHAT WONDERFUL NEWS! This show was always so entertaining. Howie was and will once again be fabulous, the models were and I’m sure will be again the best there are, and the opportunity to win big bucks can be anyone’s with luck on their side on that given day so in other words, anyone can win and they don’t have to be the brainiest or the most athletic and it’s being filmed in the magical city of Orlando. I can imagine it all, I win the million dollars and when they ask me, “So what are you going to do now that you’ve won the million?” My reply will be, “I’m moving my entire family to Orlando!”

A request for ‘Hunchback of Notre Dame’...