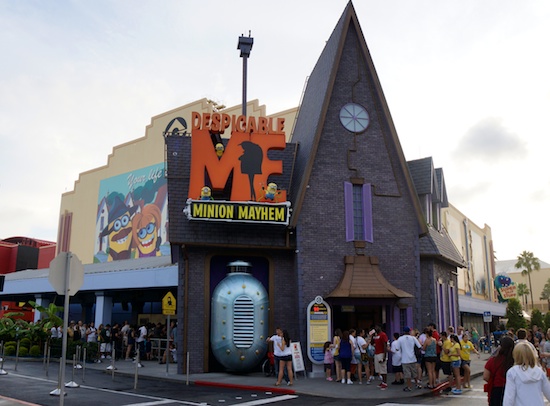 Universal Orlando’s new Despicable Me: Minion Mayhem ride opened to all regular park guests yesterday. This new attraction inside Universal Studios is sure to make you smile. Let’s take a look:

The ride is in soft openings, also known as technical rehearsals. This means it’s not officially open yet, as they’re still testing everything out with guests. This also means the ride may not be open every day until the grand opening (not yet unannounced).

Here’s a video showing the queue, pre-shows, post-show and gift shop. We didn’t record the whole pre show (We don’t want to spoil it all), but the video gives you a good idea of what to expect. Recording is not allowed during the ride. 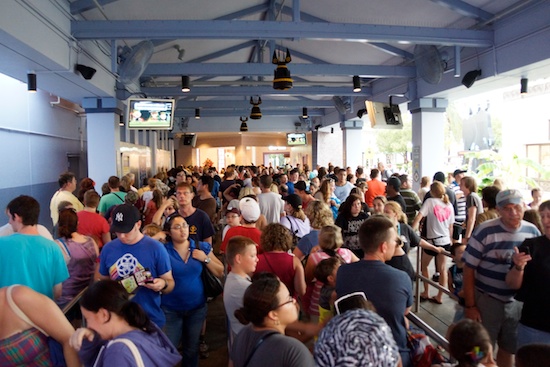 As it was the first day open, and a Saturday night, and the first night of Universal’s Summer Concert Series, the wait was 90 minutes. The queue area has multiple screens showing some information about what you’re about to do – become a Minion – and Despicable Me trivia. The video is on about a 15 minute loop, so depending on the wait, you may see it a few times. Notice the bombs hanging above guests’ heads. Those are the actually speakers. There are also multiple fans in this area. 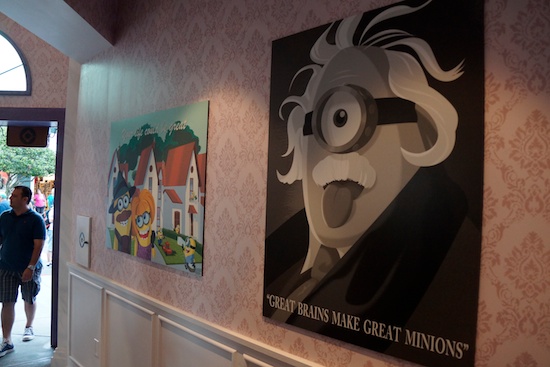 This queue also has humorous posters all along the walls. 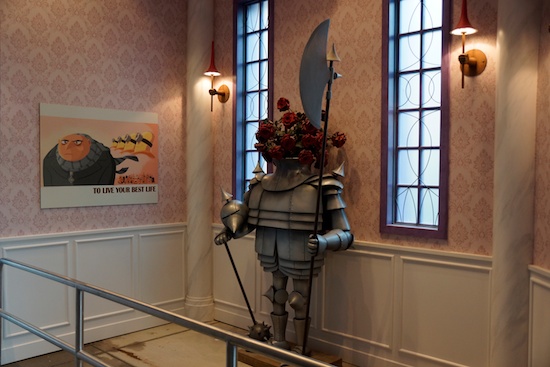 At the front, just inside Gru’s house, is this foyer area fans of the Despicable Me film may recognize. 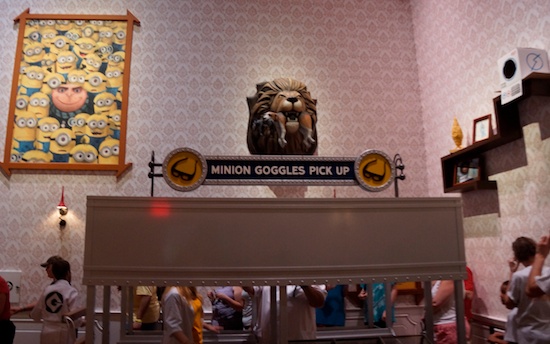 Once you’re past the outdoor queue, you enter here to get your glasses and watch the first of two pre-shows. The 3D glasses look the same as the new glasses guests use at the Spider-Man ride in Islands of Adventure. 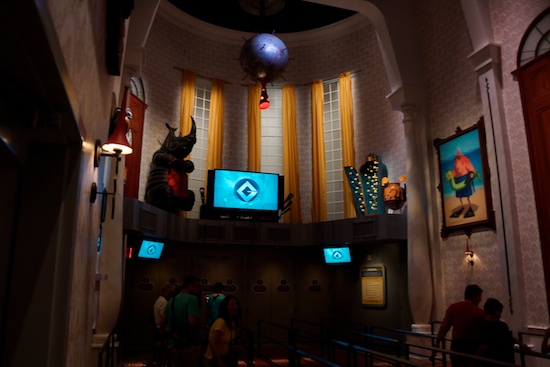 This is the other side of the room pictured in the previous photo. This large room (Gru’s living room) has a lot of details, funny photos and props to check out. 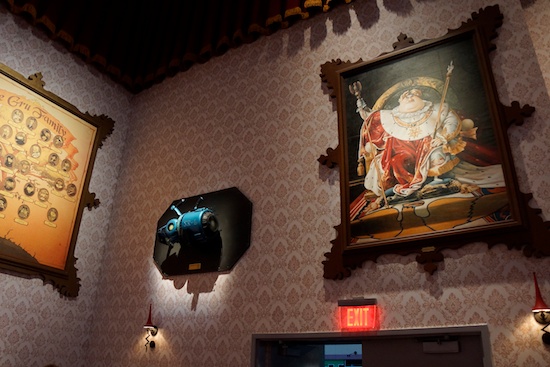 More things to see in Gru’s living room. Notice the Shrink Ray which was a main plot point of the first movie. (The second Despicable Me movie will be released next year.) 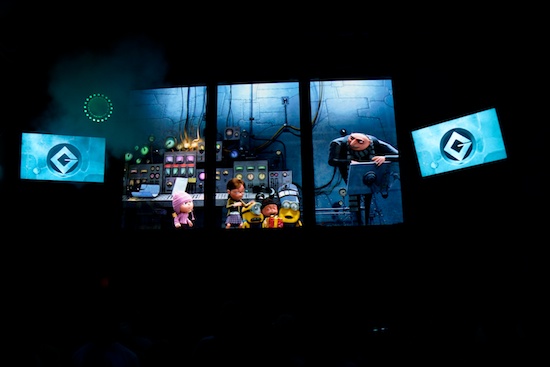 This is the second pre-show room you’ll enter. Here Gru, his daughters and the minions will prepare the audience to be turned into Minions. Part of the plot of the ride is also set up here as Gru’s daughters are trying to give him a present for the one-year anniversary of his adopting them. A couple of gags will also be played on the guests here. One can partially be seen in our video. The screens here are very sharp. They look great. So great in fact … 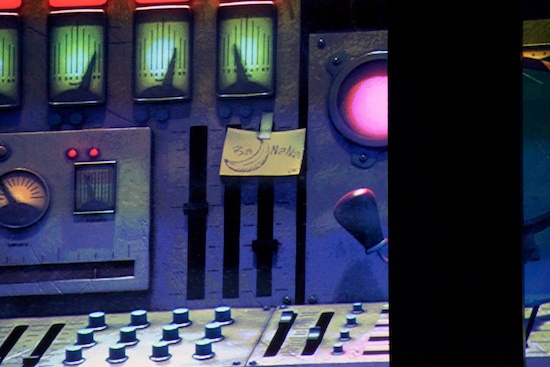 That you can see small details in the background. 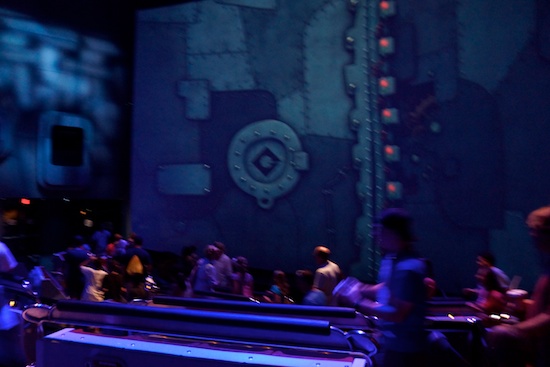 Next you move into the main ride simulator room. The simulators are the same that were used previously in the Hanna-Barbera and Jimmy Neutron rides. There isn’t much themeing in this room, just metallic-looking walls. Unlike the previous attractions in this space, Despicable Me doesn’t take you on a always forward motion race. You’ll be going all around Gru’s lab as you’re turned into a Minion, then run through a series of Minion tests before branching off to help the girls get their present to their dad. 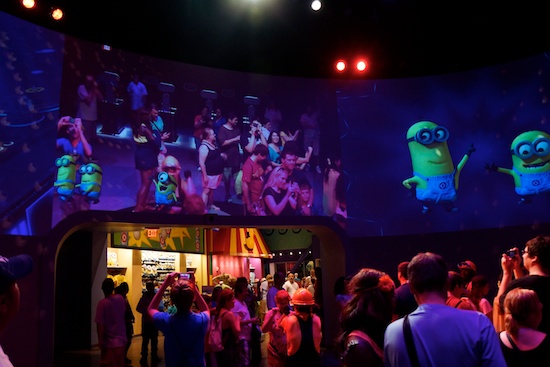 After the ride is over, you’re led into the post-show area where a dance party has already started. Unfortunately, if you’re not into dancing, there’s not much to do here except watch. But there are some neat effects on a big screen, which shows the dance party mixed with some Minions dancing on-screen. 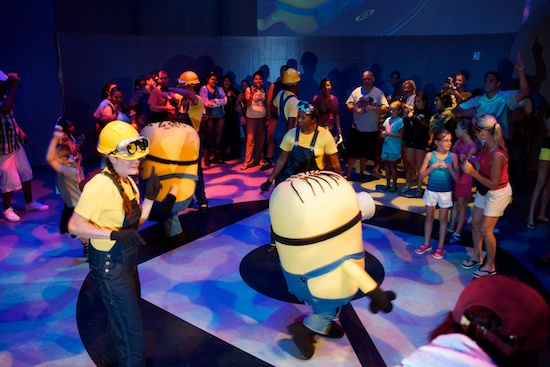 There are also usually some Minions and “human Minions” strutting their stuff on the dance floor. After this is the obligatory exit through the gift shop.

Be sure to purchase a copy of the Summer 2012 issue of Orlando Attractions Magazine to read more about the new ride plus Universal’s new parade and nighttime lagoon show, which each feature Despicable Me. The issue is available now through our iPhone and iPad apps, in print Here and in major U.S. book stores soon. 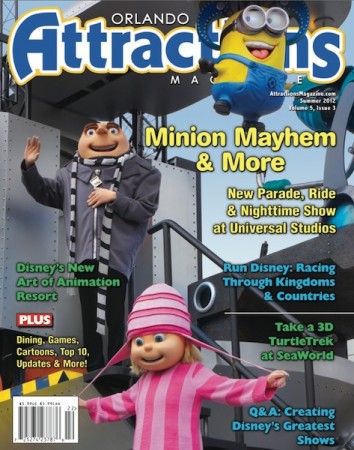 I was their yesterday I walked in the entrance at about 5:15 the wait time was 115 minutes and it was raining cats and dogs!!!! But it was worth it a rides first soft opening!! The line out side was nice and cool and a lot of posters, the in side line was good but I think it could use some robot minions or something you can tell it was the first day of teck. I knew the soft opening wold be saturday because a lot of family’s would be at the park for the victorious consent. On the good side the attraction it self was outstanding the theming was great I wont say what but I will say is one I’ve the parts of the them sould have been in the second movie. Thanks for reading my comment!!!!

Just been over to universal today, luckily the wait time was only 30 mins as we happened to be walking by as they were opening it all up. A really good ride, kinda similar to the old Jimmy Neutron ride, but I guess that was to be expected considering its in its shell. Love the minions, they are pretty funny and the 3D gives it a new feel. I’d reccomend waiting in line if the wait time is reasonable, plus you can day you have been one of he 1st people to ride!

So if my family is going in July and planning on going straight to this ride, how much time should we plan on being there ( for preshows and actual ride, not necessarily que)? Thanks!

I’d say that the actual ride experience (including the pre shows and the after ride dance area) lasts around 20 minutes. Then add on the wait time and that would be the total ride time.(for example today we were waiting in line for 30 minutes so that with the ride time meant we spent about 50 minutes on the ride in total. Hope that makes sense!?

My mom and I are going this weekend (June 16th)
Anyone know if the ‘soft opening’ will still be going on?
We really want to go on this new ride!:)

It’s a great attraction, but the wait was 2 hours when I went last week!

Blue skies and sunshine, guaranteed! – The...