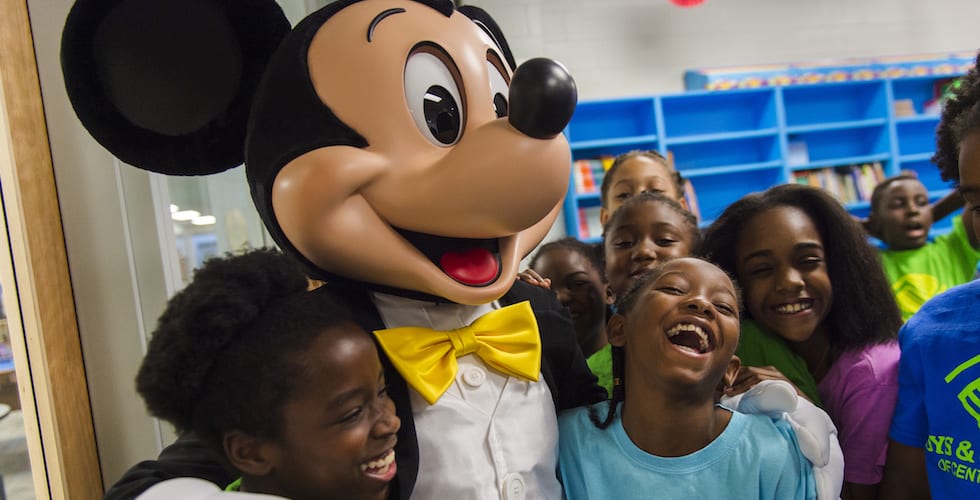 Mickey Mouse made a surprise visit to the young members of Boys & Girls Clubs Hughes Branch.

The Walt Disney World Resort is celebrating the season of giving with a $1.1 million donation to the Boys & Girls Clubs of Central Florida, which will benefit its thousands of members.

This gift helped the organization reach their goal of construction for their newest club, the Hughes Branch, located in downtown Orlando at the new OCPS Academic Center of Excellence (ACE). ACE provides before-school and after-school services, as well as weekend programming to its preschool through eighth grade students.

“There’s something special about giving back at this time of year and investing in great young people who are from the heart of our community,” said George A. Kalogridis, president of the Walt Disney World Resort. “This additional club branch not only expands the outreach of Boys & Girls Clubs in our community, but helps encourage the children of today to be the leaders of tomorrow.”

Walt Disney World’s relationship with Boys & Girls Clubs of Central Florida has been long-running, and dates all the way back to Walt Disney himself, who served as honorary board member and spokesman of the organization.

This donation is the latest in a series of donations to the organization, which received more than $1 million for the Walt Disney World Clubhouse and renovated kitchen in Pine Hills, as well as $750,000 for the sponsored teen center at the organization’s Tupperware Brands Branch in Osceola County. The Walt Disney Company also holds the title sponsorship for the Boys & Girls Clubs of America’s National Youth of the Year program.

In 2017, Walt Disney World Resort provided the Boys & Girls Clubs of Central Florida with a $150,000 Disney Grand, over $310,000 of in-kind donations, as well as other support. Disney VoluntEARs also dedicated over 600 hours of service to the organization, and also chose them as the recipient of 10 EARS to You Grants, which totaled to another $8,000.

In addition to their financial support, the Walt Disney World Resort gave the members an unforgettable experience, as more than 1,000 Club members were among the first to visit Pandora – the World of Avatar at Disney’s Animal Kingdom when it opened earlier this year.

“I’m not sure we could have dreamt of a better gift to receive this holiday season,” said Gary Cain, president and CEO of Boys & Girls Clubs of Central Florida. “We are truly fortunate to have Walt Disney World Resort right in our backyard. The support they provide is a gift year-round, and they continually ensure our students and members feel celebrated, special and recognized.”