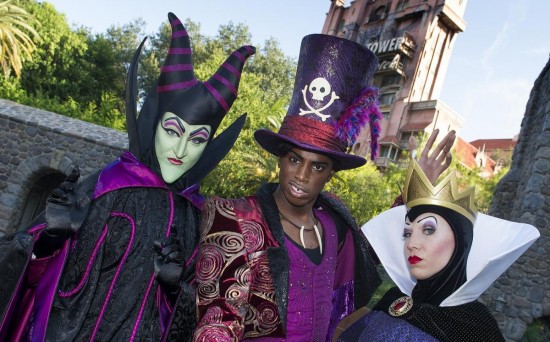 On Friday, Sept. 13 from 8 p.m. to 1 a.m., Disney’s villains will be coming out to play at Disney’s Hollywood Studios during the “Unleash the Villains” dance party for Limited Time Magic.

The hub of the villains’ festivities will be staged “dead” center of Disney’s Hollywood Studios at Hades’ Hangout – the hottest club north of the Underworld. The “Lord of the dead,” Hades, will host spine-tingling fun while his henchmen, dancers, interactive DJ and hot house band keep the nighttime activities on fire.

Hades’ 13 devilish Disney brutes will be waiting in Villain Encounters surrounding Hades’ Hangout for greetings and autographs with guests. To celebrate the imminent arrival of the midnight witching hour “Villainy in the Sky” will set the sky ablaze with spectacular fireworks, and keep the party going until the 13th hour.

EDITOR’S NOTE: If you’ll be coming to the event, make plans to join us the day before starting at 11 a.m. at Downtown Disney’s Splitsville for our “Have Fun for Give Kids the World” blogger bowl. For just $25 you’ll be helping a child with a life-threatening illness vacation in Orlando with their family. Plus you’ll get food, drinks, a DJ, and a chance to win some awesome prizes in the silent auction. Come dressed in a ’50s outfit for a chance at prizes. Plus you can cheer on your favorite theme park fan websites. Click Here for more info.

UPDATE: Sept. 10, 2013 – Disney has posted the times for the event on the times guide for Disney’s Hollywood Studios. Schedule of events are as follows:

thanks for details.. I wanted to respectfully point out that GKTW is not limited to kids’ with terminal illness but rather with life-threatening illness. Many families are hopeful that their children will recover, and terminal is just not something they want to hear.

Is this a special ticket event?

You’re right Lisa and we have corrected it.

No Julianne, it’s for everyone at the park that day.

Have a magical Valentine’s Day at Walt...

Out of the Loop: Hatbox Ghost returning...