Disney Behind Bars: 10 Disney Villains get sentenced by U.S. guidelines

Sure, Disney’s animated films are full of light, fun, love, and adventure. But behind all that whimsy and happy-go-lucky attitude in Disney’s timeless stories are the Disney Villains seeking to bring it all down! 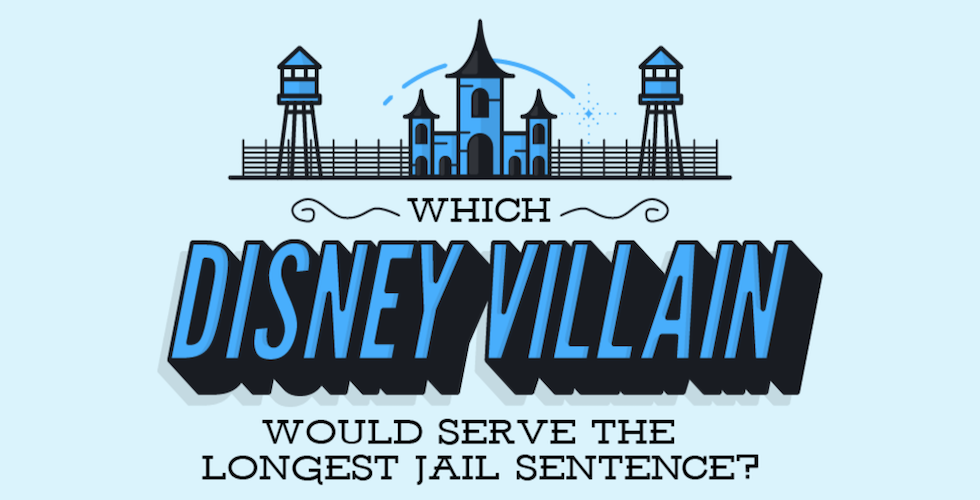 Which Disney Villain do you think would get the longest jail sentence?

Who would get the most jail time if Disney Villains were charged for their crimes in a U.S. court? Decluttr took 10 of the most infamous bad guys and put them to the test. 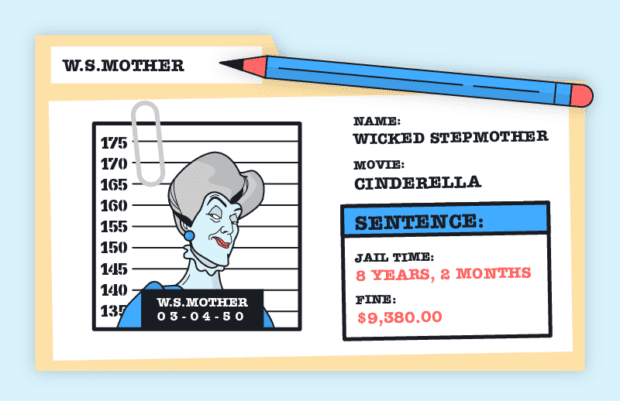 After Cinderella’s father passes away, her stepmother, Lady Tremaine, becomes jealous of Cinderella and unleashes her cruelty upon the orphan. Her mistreatment of Cinderella is worthy of jail time, as well as paying nearly $10,000 in fines for her crimes!

For domestic violence, false imprisonment, and criminal damage when she destroys the glass slipper, Lady Tremaine is facing more than eight years in jail. 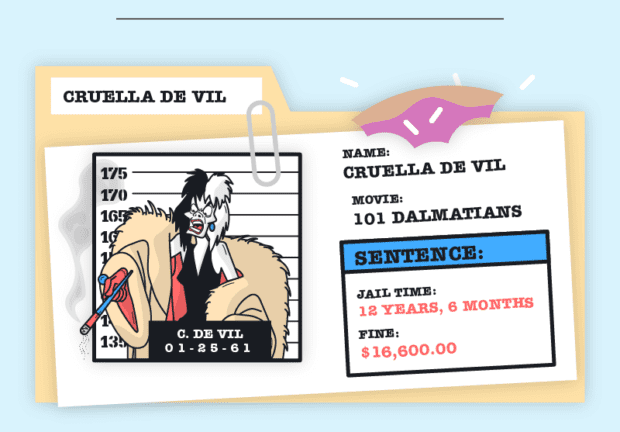 If she doesn’t scare you, no evil thing will! Cruella has a passion for fashion, particularly fur coats made out of puppies. To create the garment of her dreams, she’s stolen many dogs and puppies for this purpose. Since she’s taken so many from their homes and families, its likely that she would receive a felony charge.

de Vil would also be charged with cruelty to animals, plus reckless driving. All three of these crimes would land this villain in the dog house for more than a decade and $16,600 in fines. 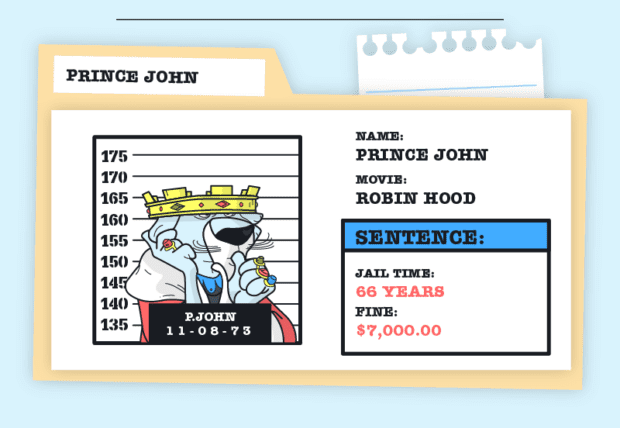 Robin Hood might have stolen from the rich to give to the poor, but Prince John was stealing from everyone to benefit himself! His subjects fell into poverty as he raised taxes, which gets him an abuse of power charge.

Prince John could also be found guilty of assault and treason as well, meaning he’ll spend the rest of his days in prison, plus paying thousands of dollars in fines! Irony is great, isn’t it? 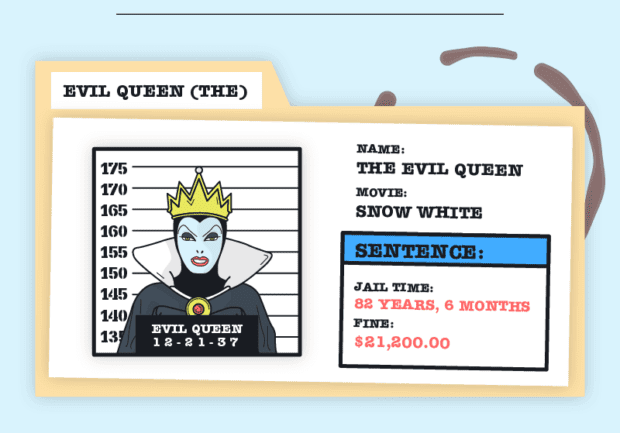 She isn’t the fairest of them all, but she’s also not the worst villain of them all, either. The self-obsessed Evil Queen just can’t get over that Snow White is more beautiful than her, so what does she do? She automatically resorts to murder.

The Evil Queen is guilty of attempted murder, abuse of power, and false imprisonment – she’ll never see the light of day again, and will have to give up thousands of dollars in fines. 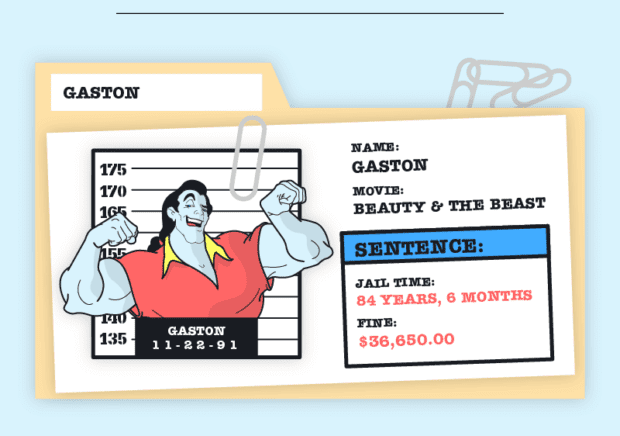 My, what a guy, that Gaston. His good looks won’t help him avoid the rap sheet he earned when Belle spurned his advances. The best-looking guy in the village earned himself 85 years in jail for his pursuit of the inventor’s daughter.

Gaston’s crimes include breaking and entering, bribery, and incitement to riot. He’ll have to pay $36,650 in fines, too. So much for true love. 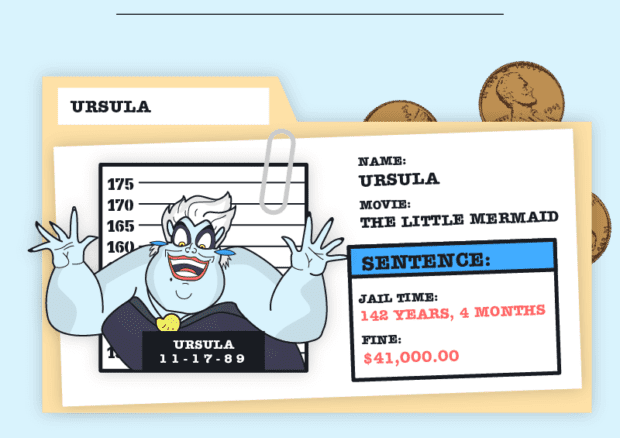 Ursula is definitely one of the more manipulative villains on this list. The sea witch is morally corrupt and bad to the tentacle, so it shouldn’t come as a surprise that she’d be charged with fraud – but that’s not all!

For attempted murder, murder, false imprisonment, and treason, Ursula is looking at a hefty fine and a jail sentence to boot. 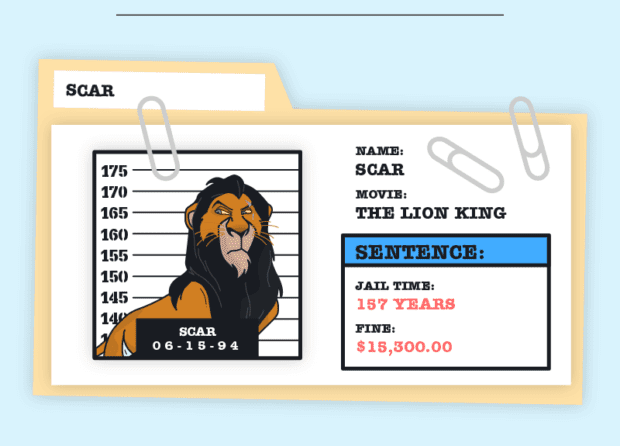 Scar’s lust for power over the Pride Lands leads him to murder, child endangerment, and assault. His crimes will put him away for life. Depending on the state, Scar could even face the death penalty. 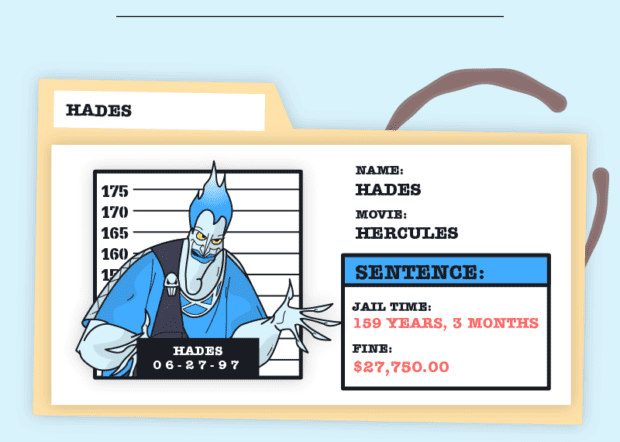 You’d think being a god would be enough for a guy, but not Hades! His brother Zeus is far more powerful, and that clearly never sat well with the king of the underworld.

With charges of murder, false imprisonment, and kidnapping, Hades will find himself in the Mount Olympus slammer for almost 160 years and have to pay up $27,750 in fines. 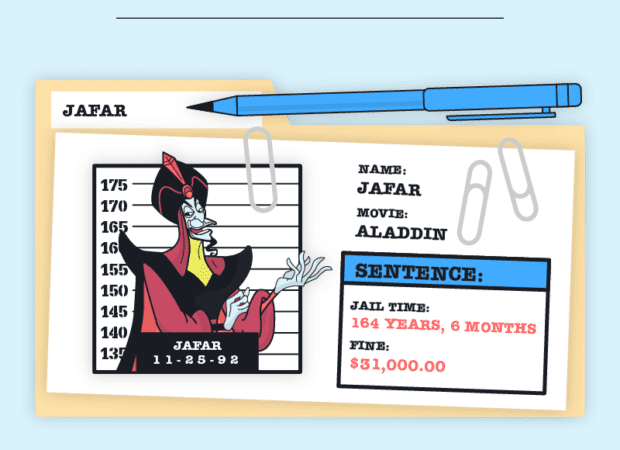 Jafar is the Grand Vizier, but he has his political sights set higher – and he’ll do whatever it takes to get there.

After committing treason, attempted murder, and theft, Jafar’s going away for 164 years, and he’ll have to pay $31,000 in fines. 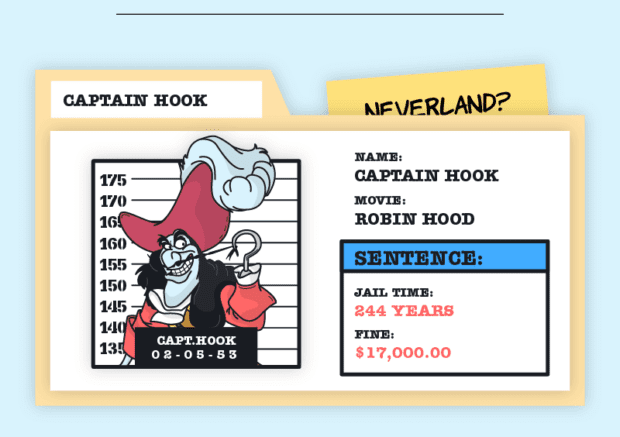 Being a pirate is already considered a crime, so Captain Hook isn’t off to a great start. The villainous captain has a taste for blood when it comes to Peter Pan, and even kills one of his own men in his pursuit.

When you consider his charges of piracy, attempted murder, murder, and kidnapping, Captain Hook’s looking at the longest sentence of all the Disney Villains! The hook-handed pirate will find himself in Neverland jail for more than 200 years. Depending on the state he’s tried and convicted in, he could be looking at a death penalty.

Who do you think is the worst of all the Disney Villains? Let us know in the comments below!

How many years would Clayton serve? He killed an ape (Kerchak) with his shotgun