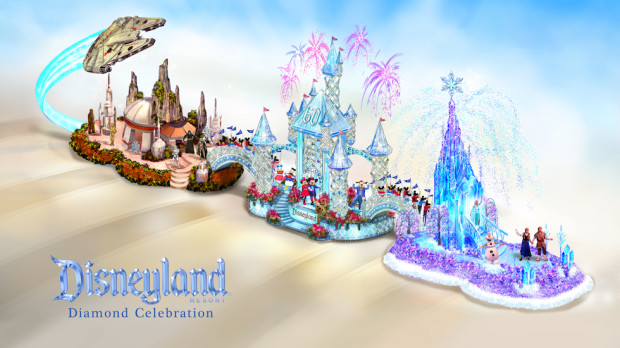 On Jan. 1, 2016, the magic of the Disneyland Resort Diamond Celebration will come to life as a float in the 127th Rose Parade.

After using approximately 650,000 flowers, volunteers recently added the finishing touches to the float titled “Disneyland Diamond Celebration – Awaken Your Adventure.” The float will be featured in the Rose Parade, broadcasting live from Pasadena, Calif., at 11 a.m. (EST) on Jan. 1, 2016. The theme of this year’s parade is “Find Your Adventure,” and the Disneyland Resort float honors some of the adventures awaiting guests at the Happiest Place on Earth. At one point in the parade, 60 Disney characters will join the float.

At the heart of the float will be a sparkling recreation of Sleeping Beauty Castle, complete with Mickey Mouse and Minnie Mouse welcoming everyone to the Disneyland Resort Diamond Celebration. Flanking the castle are two adventures that are brought to life at the Disneyland Resort. The first comes from the world of “Frozen” and depicts Elsa’s ice castle accompanied by Anna, Elsa, Olaf and Kristoff. A separate adventure depicted on the float makes the jump to hyperspace and travels to a galaxy far, far away for an adventure dedicated to the Star Wars films and new Star Wars experiences at Disneyland.

A few facts about the float:
• The “Disneyland Diamond Celebration — Awaken Your Adventure” float is more than 150-feet long, the longest float in this year’s parade.
• The float is covered with approximately 650,000 flowers.
• The “Frozen” section of the float features “ice” made of blue statice, ice blue coconut, silverleaf, lunaria and button mums.
• The Star Wars-themed section features cases of tangerines and kumquats, and mountains of gold, bronze, and rust chrysanthemums. The Millennium Falcon is covered with flax seed, carnations, strawflower and seaweed.
• The center section features Sleeping Beauty Castle, covered in 250 “diamonds” made from white coconut, blue statice and silverleaf.
• More than 5,000 bunches of blue statice are used on Elsa’s “Frozen” ice castle and Sleeping Beauty Castle.
• A natural blue flower dye is used to create light blue “ice.”
• Hundreds of “Pincushion Protea” and “Moby Dick Tak” flowers adorn the Star Wars unit.
• Designers used 47 varieties of seeds and combinations of seeds to decorate the three sections.

The appearance of the Disneyland Resort Diamond Celebration float in the 2016 Rose Parade marks the continuation of a Disney relationship with the Tournament of Roses that began in 1938:
• The relationship began when characters from the newly premiered “Snow White and the Seven Dwarfs” (1937) were prominently featured in the parade.
• Each year since 1960, the Rose Queen and her Royal Court, along with the competing Rose Bowl football teams, have visited Disneyland Resort.
• In 1966, Walt Disney served as Grand Marshall of the parade. Roy E. Disney, Walt’s nephew and the head of Disney Animation, served as Grand Marshall in 2000. Members of the Disney creative team from Walt Disney Imagineering and Disney Entertainment have served as float judges numerous times.
• In 2004, Disneyland Resort presented “A Sudden Drop in Pitch.” At the time, it was the tallest float in Rose Parade history (110 feet, with live performers at the top). The float’s title played off that year’s theme of “Music, Music, Music,” and the float was inspired by The Twilight Zone Tower of Terror attraction, which opened in Disney California Adventure that spring.
• In 2005, the 50th Anniversary of Disneyland was celebrated with both a dazzling Rose Parade Opening Show and a castle float called “The Happiest Celebration on Earth.” Mickey Mouse served as Grand Marshall.
• In 2006, the longest float (150 feet) in Rose Parade history, entitled “The Most Magical Celebration on Earth,” celebrated Disney Parks around the world.
• In 2013, the characters of Cars Land raced into Pasadena for “Destination: Cars Land,” a float showcasing the landmarks of the newly opened land in Disney California Adventure. The 125-foot long float featured replicas of Lightning McQueen and Sally recreating their road race from the first “Cars” movie. Mater, the tow truck, followed along behind the float.
• In addition to Rose Parade float entries, Disney has presented many Rose Parade Opening Shows through the years, celebrating such milestones as the 35th Anniversary of Disneyland in 1990, the debut of the Indiana Jones Adventure in Disneyland in 1995, and the motion picture premiere of “Fantasia 2000,” in 2000.

For more information about the Disneyland Resort, see Disneyland.com or visit DisneyParksBlog.com.

Disney originals vs. remakes: Which ones are...