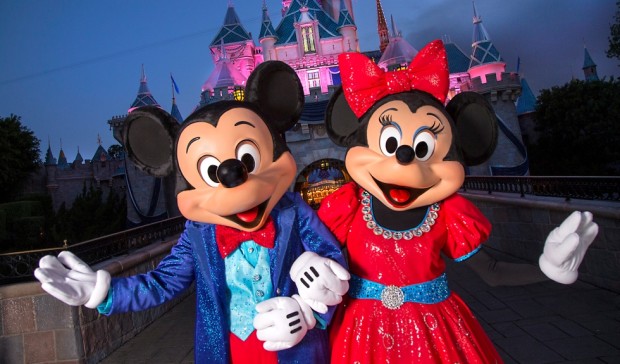 A glittering new parade, new fireworks spectacular and all-new “World of Color” show raise the bar, once again, on creativity and entertainment technology, keeping the Disneyland Resort and its guests forever young.

Paint the Night Parade
When the lights go down in Disneyland, the Diamond Celebration illuminates the park with an all-new parade. This luminescent parade creates a river of color flowing down Main Street, U.S.A., with an array of Disney characters and more than 1.5 million LED lights that flash and glow as Mickey Mouse uses his vivid imagination to “Paint the Night.” With special effects, unforgettable music, energetic performances, surprises and many floats, “Paint the Night” is more vibrant than any parade in 60 years at the Disneyland Resort. Even the choreography glows, as parade performers light up with their props and costumes.

Tinker Bell leads the procession in a musical overture, closely followed by a float reminiscent of the giant bass drum that led the classic “Main Street Electrical Parade.” Lightning McQueen races in with his buddy Mack Truck, who makes a hefty impression at 54-feet long, covered from headlights to tail pipe in gleaming light. Anna and Elsa from “Frozen” glide through the night in a shimmering palace of ice and snow. Guests also will be delighted to see Cinderella, Rapunzel and beloved characters from tales such as “Monsters, Inc.,” “The Little Mermaid,” “Beauty and the Beast” and “Toy Story,” with Mickey and his pals creating a grand finale.

Disneyland Forever
The new fireworks spectacular “Disneyland Forever” is a street-to-sky, immersive experience like nothing seen before at the Disneyland Resort. Guests will be surrounded by Disney tales, from the tips of their toes to the sky high above, thanks to the largest installation of projection mapping technology in a Disney park and special effects.

For the first time in Disneyland fireworks history, Nemo from the Disney●Pixar animated film “Finding Nemo,” will “just keep swimming” in the skies above Sleeping Beauty Castle, as the Matterhorn is transformed into the fiery peak of Mt. Wannahockaloogie from that film. Two original songs enrich the show: the “Disneyland Forever” theme “Live the Magic,” and the closing song “A Kiss Goodnight,” written by Disney Legend Richard M. Sherman, and sung by Ashley Brown, star of the Broadway production of “Mary Poppins.” The “stage” for “Disneyland Forever” fireworks will extend from the sky above to the buildings of Main Street, U.S.A., the façade of “it’s a small world,” the Matterhorn and mist screens along the Rivers of America, with specially designed digital projections offering guests new experiences at each location.

Guests will take an inspirational journey through the unparalleled imagination of Walt Disney, exploring his decades-long legacy of memorable animated moments around the world and the dream of Disneyland Park. “World of Color – Celebrate!” reminds guests that, if they never give up on their dreams, anything is possible.

In addition, Mickey Mouse and some of his friends have dressed up for the celebration in sparkling, new Diamond Celebration costumes, and the iconic Sleeping Beauty Castle in Disneyland and Carthay Circle Theatre in Disney California Adventure glisten with gleaming veneer and diamond medallions.

New window displays will begin appearing at the Main Street Emporium in Disneyland, providing some additional Diamond Celebration surprises, and even the resort cast members, who help make the magic for every guest, have a bit of extra sparkle in their Diamond Celebration name tags.

Restaurants and food carts in Disneyland and Disney California Adventure offer new drinks and cupcakes specially created for the Diamond Celebration. Later this summer, drinks will be available in “Made with Magic” sippers which light up to accompany the new after-dark shows. Additional “Made with Magic” merchandise items – newly designed ear hats, wands and paint brushes – are also available for the celebration.

More than 500 special merchandise items have been created for the Diamond Celebration. They can be found at shops throughout Disneyland Resort.

“Few companies have both a legendary past as well as a limitless future,” said Bob Iger, chairman and CEO of The Walt Disney Company. “But we had the great fortune to be founded with a spirit of creativity and innovation — one that continues to define this phenomenal company, allowing us to keep moving forward to meet the future without ever losing sight of who we are and where it all started. We’re thrilled to usher in Disneyland’s Diamond Anniversary and celebrate the triumph of imagination in a place where dreams really do come true.”

Be sure to see our hosted video coverage of the Disneyland Diamond Celebration during the May 28, 2015 episode of Orlando Attractions Magazine: The Show.