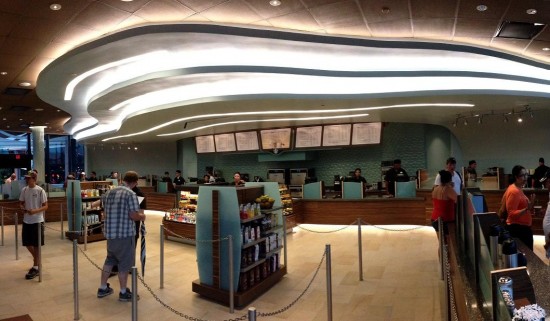 The Fountain View at Epcot has reopened with a new look and new offerings as Starbucks has moved in.

Popular Disney-made treats will be served alongside Starbucks favorites like coffee, espresso and Frappuccino-blended beverages, as well as breakfast sandwiches and pastries. Fountain View is the second Starbucks location at Walt Disney World Resort. Like Main Street Bakery’s nostalgic design on Main Street, U.S.A at Magic Kingdom, Fountain View was designed to match the futuristic theme of Future World.

A look inside Starbucks at Epcot in the Fountain View

Over a year ago, Disney announced that all six of their U.S. theme parks would be getting Starbucks locations. The first to open was a part of the reimagined entry to Disney California Adventure. Then last November we found out the first two at Walt Disney World would be at the Main Street Bakery at Magic Kingdom, and in the Fountain View at Epcot. Disney’s Hollywood Studios and Disney’s Animal Kingdom will be getting their own Starbucks location in the future.

Just announced, Wetzel’s Pretzels and Häagen-Dazs in the West Side of Downtown Disney will be shutting down next month and opening kiosk locations near DisneyQuest. Their old location will become the new Starbucks next year, with a Starbucks kiosk also opening near World of Disney in the Marketplace.

Star Wars days return to the History Center Sept. 14 and 15

Out of the Loop: A look at Sony Pictures Studios Twilight Tour