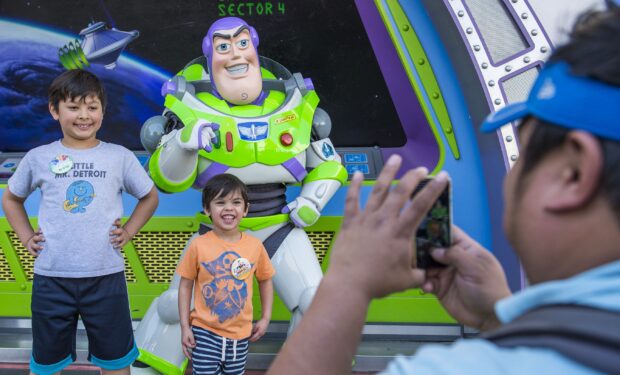 To kick off the summer season, Disney Parks will host a special 24-hour coast-to-coast celebration that invites guests to “Rock Your Disney Side” at three Disney theme parks ­­- Disneyland and Disney California Adventure at the Disneyland Resort in California, and the Magic Kingdom at Walt Disney World in Florida.

From 6 a.m. May 23 to 6 a.m. May 24, 2014, on each coast, Disney pirates, princesses, villains and a few rare characters will stay in the parks all day and all night, inviting guests to dress up for the occasion, too. Guests may join the party dressed in costume, perhaps as their favorite Disney Hero or Villain.

The 24-hour celebration of summer also features special entertainment in all three parks.

At Walt Disney World:
In Florida, a cast of Disney Villains will have a special place in the Magic Kingdom 24-hour celebration, including Maleficent, Cruella De Vil and such rarely spotted miscreants as the Big Bad Wolf, Stromboli from “Pinocchio,” and Bowler Hat Guy from “Meet the Robinsons.” They will appear in locations throughout the park around 1:45 a.m. and also join in the “It’s Good to Be Bad” cavalcade preceding Disney’s Main Street Electrical Parade.

Guests at the Magic Kingdom can also enjoy nighttime dancing around Cinderella Castle and in Frontierland. The “#IncrediblesSuperDanceParty,” a nightly feature throughout the summer, will be followed during the All-Nighter by special screenings of “The Incredibles” at the Rockettower Plaza Stage in Tomorrowland.

The “Move It! Shake It! Celebrate It!” Street Party will feature Disney heroes at 10 a.m. and Disney villains at 1:30 p.m. Starting at 11 p.m., half of Princess Fairytale Hall will become Scary Tale Hall, where guests can meet Maleficent and the Queen from “Snow White and the Seven Dwarfs.”

The 24-hour party will conclude with a special “Kiss Goodnight” at 5:50 a.m. at the Railroad Station in Town Square on Main Street, U.S.A.

At the Disneyland Resort:
In California, the 24-hour fun begins in the Esplanade outside the entrances to Disneyland and Disney California Adventure parks, where guests will discover Olaf, the snowman from “Frozen”, represented by a larger-than-life sand sculpture. Fireworks and live entertainment will entertain guests as the parks open at 6 a.m. Pacific Time.

At Disneyland, exciting entertainment will include the “Avengers Super Hero Movie Marathon” throughout the day and overnight in the Magic Eye Theater in Tomorrowland. Nighttime highlights will feature an after-midnight performance of “Mickey’s Soundsational Parade” and dance-till-dawn parties at the Tomorrowland Terrace Dance Club and the Sleeping Beauty Castle Forecourt Dance Club. In addition to 24 hours of atmosphere entertainment and appearances by Disney characters, the Disney Villains are planning an overnight “takeover” of the Royal Hall in Fantasy Faire.

Disney California Adventure invites guests to kick off summer with an all-night “Mad T Party,” dancing in Pacific Wharf and Paradise Garden, and a special 3 a.m. performance of “World of Color,” the water spectacular with nearly 1,200 dancing fountains.