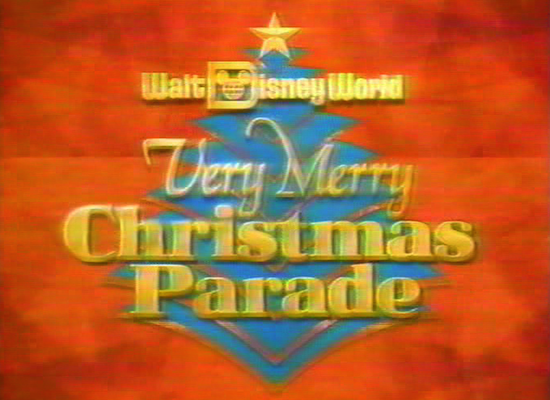 “Children, evergreens and sleigh rides too. Carols, shining lights and joy brand new. This is a magic time when dreams do come true, you have a sparkling Disney Christmas party. Castles, characters and lot of cheer. Wishing you and yours a brand new year. Jolly old Santa Claus, eight dancing reindeer. Cause there’s a magic Christmas, and it’s all right here!”

As many of my family, friends, and fans of Orlando Attractions Magazine – The Show know, I am a huge Disney Parks fanatic. And my favorite time of the year is without a doubt the holiday season! There’s just something about Christmas at Disney that warms my heart and reminds me of being a kid back home in Texas, opening presents underneath the tree with my mom and grandparents, and watching the Walt Disney World Very Merry Christmas Parade on ABC television. Of course nowadays it’s called the Disney Parks Christmas Day Parade, but throughout the name, host and even time changes in its 29 year history, my love for the yearly broadcast remains stronger than ever. It is a family tradition, one that I hope to pass on to my kids someday.

The first time my family and I watched Disney’s Christmas Parade together was in 1992, and they were celebrating their 10th anniversary, having first debuted in 1982. Joan Lunden and Regis Philbin were the hosts, Ed McMahon was reporting from Disney/MGM Studios and John Davidson was the man on the Main Street reporter. I immediately fell in love with the show. It was a way to be magically transported to Walt Disney World without leaving home. That year I got to see the premiere of Aladdin’s Royal Caravan, preview Mickey’s Toontown at Disneyland in California, and see the grand opening festivities of Splash Mountain. I couldn’t wait for next year and to find out what sort of great new things I’d see! 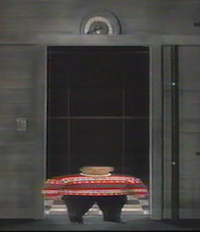 1993’s parade introduced me, for the first time, to a new ride coming to MGM in 1994, The Twilight Zone Tower of Terror. Regis got a sneak peek at the attraction, with him ending up being squished down to a size of two feet tall thanks to the runaway test elevator. That was my first impression of Tower of Terror, so no wonder I was scared to go on it! But that fear became love, and it is now my favorite attraction. That was the beauty of the Christmas Parade back in the days before the Internet. It provided viewers a window into the coming attractions at Walt Disney World and Disneyland, something most people couldn’t find elsewhere.

The years went on and we’d continue watching and recording the parade each Christmas day. My grandparents always stayed at our house Christmas Eve so we could all wake up and watch the telecast together. In 1996 the hosts changed. ABC wanted to bring in personalities from their various shows. So Joan and Regis were out, and that year it was Jerry Van Dyke and Suzanne Somers, with the hosts of Walt Disney World Inside Out, JD Roth and Brianne Leary, as the reporters. This was also the last year the parade would be broadcasted live on ABC.

1997 brought the first entirely pre-recorded parade broadcast, a format they have kept to this day. The name was also changed that year to A Magical Walt Disney World Christmas. 1999 was the first and only time the parade was filmed and broadcast at night, which added a unique element. Then came the year 2000, the one year in the parade’s history it didn’t air. Instead, Disney aired a special Tracking Santa Claus broadcast. I was completely livid. How dare Disney and ABC not show the parade?! I called our local ABC television station and gave them an earful. I realize now they had nothing to do with the situation, but I was 14 and really mad. I thought that was it, no more Christmas parades. I was completely heartbroken.

Luckily in 2001 Disney got smart and brought it back, changing the name to the Walt Disney World Christmas Day Parade and even bringing Regis back to host with his then new co-host Kelly Ripa. 2004 saw the introduction of having a split parade broadcast, with half being at Walt Disney World hosted by Regis and Kelly, and the other half being at Disneyland hosted by Ryan Seacrest. The format stayed like that for the next four years. 2008 was the 25th anniversary of the parade, and also the final year that Regis hosted. In the midst of those four years I got accepted to the Disney College Program for the fall program of 2007. Little did I know at the time, but the 2006 broadcast would be the last time I have been able to watch the parade with my family in Texas. 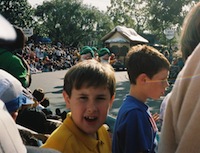 I moved to Orlando in May of 2007, working custodial at the Magic Kingdom. It didn’t hit me until November that I would actually have the chance of attending the filming for the parade in person! This was a dream come true for me. My mom has told me that when we visited Walt Disney World during the Christmas season in 1993, I asked if we would get to see the parade in person. And now, 14 years later, I was going to. The downside was that for the first time in my life, I wasn’t going to spend Christmas with my family. But that’s the beauty of the Christmas Day Parade. Even though I wasn’t going to be with them in person, I was still going to be there with them through the telecast, because I knew they would still continue watching without me. So a brand new tradition was born. I would go to the parade filming every year so that my family’s tradition of watching the parade with me can also continue.

In 2009 there was another name change to Disney Parks Christmas Day Parade, and that’s what is continues to be. That year was fun for me because I got to be part of a giant flash mob in the Hub for the opening performance by the Jonas Brothers. It was pretty epic. 2010 saw Ryan Seacrest switch hosting locations and host here at Disney World, with Nick Cannon becoming the Disneyland host and Maria Menounos becoming the reporter at 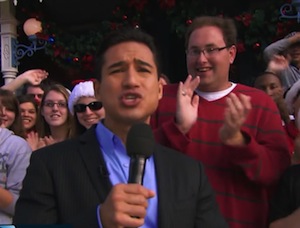 Disney World. That was also the year I started to notice the best place to stand on Main Street to be seen by the cameras. So in 2011, when Ryan was out and Mario Lopez hosted here, I picked a spot in front of the Confectionary and it paid off big time. This was around the time my granddad’s health started to go downhill, so I knew I needed to stand somewhere where he had a clear view of me. Between the parade on Main Street and the performances at the castle stage, I was able to be seen in 48 different shots. I knew I wanted to try to repeat that this year.

This year Mario and Nick have switched places, but the parade looks like another great one! I had a blast at the filming this year, but also learned not to mess with stage moms. There was miscommunication with turnstiles the morning of the Newsies performance filming. These parents were there to see their daughters perform on Main Street with the Newsies, but the cast members working the turnstiles were told to only let those with parade filming tickets in first, and the parents weren’t having any of that. There was almost a complete riot, with moms and dads alike threatening the poor cast members, who had no idea what was going on. I had filming tickets, but some of the moms would not let me and my friends through. I was honestly scared for my life for a minute. As crazy as that situation was, everything was resolved and I was able to grab my spot in front of the Confectionary.

I’m really looking forward to seeing the parade on Christmas Day! It’s always interesting to see how everything is put together in the final edit after watching it being filmed in sections. Sometimes it’s painfully obvious there’s a time edit, and sometimes they have used shots from previous years, but I still love it and hope it stays with us for many years to come so that I may pass down my tradition to my future kids.

And as long as there’s always a Disney Parks Christmas Day Parade every year, I will try to continue being part of the audience, because in a way, it will always help me be home for Christmas with my family. 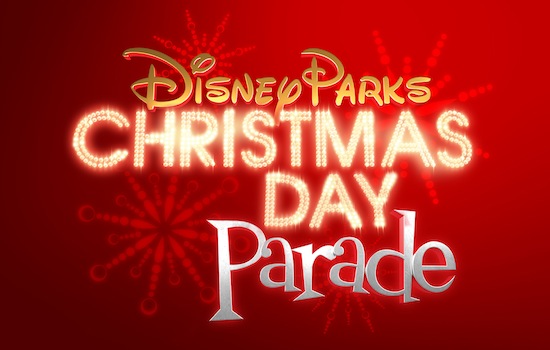 I loved this!! especially that the whole family shares the passion for Disney. Your journey to get there is heartfelt and even touching. I hope to finally get to meet you in person so I can have you be part of our Disney family.

Hey Banks I saw you at the parade! Right at the end of Phillip Phillips’ set. You were in the background clapping.