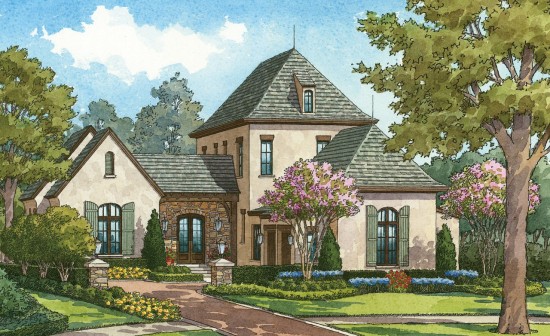 The Golden Oak high-end housing community at Walt Disney World continues to grow with the announcement of the first 19 homesites going on sale in their new neighborhood, Marceline.

As part of the Golden Oak community, Marceline residents will enjoy a lifestyle surrounded by the Walt Disney World Resort. This neighborhood is located in close proximity to Disney theme parks and recreation, taking advantage of its natural setting. More than half of the Marceline homesites will offer water views and others will border on a nature preserve. Each homesite is approximately one-quarter acre in size and is within easy walking distance of Summerhouse, the private clubhouse for Golden Oak residents and their guests.

Marceline will showcase the same custom home building found throughout Golden Oak today, with residences drawing design and architectural inspiration from European and Caribbean influences. Buyers can select from three homebuilders to create custom homes ranging in size from approximately 3,800 to 4,500 square feet. Golden Oak homes start at $1.6 million. Prices, inclusive of homesite, in the Marceline neighborhood will start at $1.7 million.

Marceline is named after the Missouri town where Walt Disney grew up in the early part of the 20th century. Memories from those formative years influenced creative directions he took throughout his life. Walt’s animation legacy has roots in Marceline, and the new Golden Oak neighborhood pays homage to that history with a planned sculpture park that will feature life-size sculptures of characters from Walt’s animated masterpiece “Snow White and the Seven Dwarfs”.