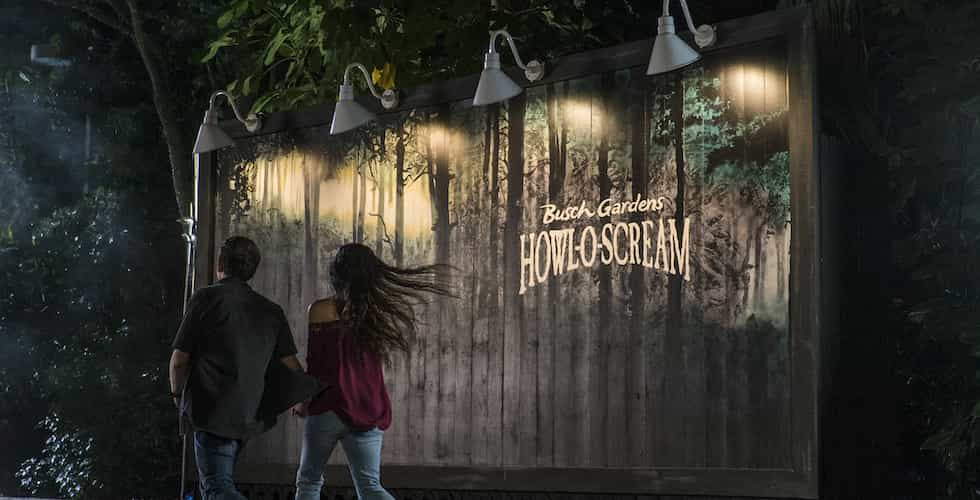 Busch Gardens Tampa Bay’s annual Halloween event, Howl-O-Scream returns this year for 19 terrifying nights with two all-new haunted houses, five scare zones and the chance to ride their thrill rides in the dark – some of which are “infected” with roaming horrors.

“Undead Arena: Live” takes guests to a post-apocalyptic world, where survivors of the Great Conflict have been split up into two factions: The Worthy and The Unworthy. Each guest will become a member of The Unworthy, as they fight for their lives in the gruesome event at the Undead Arena: Live, a gauntlet that’s invaded with Brian Eaters. With such peril ahead, there’s no guarantee your group will stay together.

“Demented Dimensions” takes place in the abandoned Sterling Manor, built high above a vortex of otherworldly energies, which create a series of portals to other dimensions. Each room and hallway lead to a different universe, and the rules of our world do not apply. Escape is almost impossible from these horrifying worlds.

Guests won’t be safe in the streets either, as Howl-O-Scream brings three new scare zones, as well as two classics to the Halloween event:

Guests to Howl-O-Scream will also be able to take a chance on a thrill ride in the dark, like the spin-coaster, Cobra’s Curse. Daytime favorite thrill rides will be infested with zombie hordes and gruesome creatures who will fill the empty seats that guests don’t occupy.

Howl-O-Scream 2017 runs on select nights at Busch Gardens Tampa Bay from Sept. 22 through Oct. 29, from 7:30 p.m. to 1 a.m. each night. Tickets for each guest start at $39.99 plus tax, and special offers are available for Busch Gardens Pass Members.

For more information on this year’s Howl-O-Scream event, and to purchase tickets, visit HowlOScream.com.

Check out the Sept. 21, 2017 episode of ‘Early Night Live’ below for a lights-on look inside Demented Dimensions as well as other fun surprises from this year’s Howl-O-Scream:

Join us for ‘Early Night Live’ at Universal Orlando