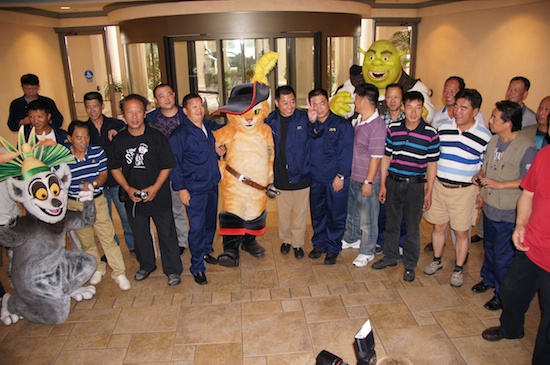 They’ve come all the way to Florida just to be subjected to freezing temperatures. But not everyone can produce the magnificent ice sculptures that guests see every year at the Gaylord Palms Resort.

This year’s theme for the annual ICE! display is Shrek the Halls, based on the holiday television special. In fact, Christmas at Gaylord Palms is all about the Dreamworks Animation characters this year, so it’s fitting that Shrek, Puss in Boots, Kung Fu Panda and other characters were on hand to greet the 40 ice artisans from Harbin, China.

The ice for ICE! is created using a special “recipe”, and it arrives in approximately 36 truckloads over a three-week period… two trucks a day for 15 days, which is about as fast as the ice factory can produce it. Large blocks of ice are delivered on pallets via refrigerated tractor-trailers, then moved into place by forklift.

Clear, “crystal” ice is the most difficult to make. It is created using highly filtered de-ionized water. It takes three days to freeze the 45 gallons of water used to create each 400-pound ice block. By freezing it slowly, the molecules are able to line up perfectly, similar to a diamond or crystal.

White ice, which looks like compacted snow, makes up part of the attraction, but is invaluable when carving a snowman. This ice is frozen quickly, giving it a cloudy look, much like the ice made in a home freezer. By freezing quickly, the molecules do not have time to perfectly align.

Colored ice, dyed one of nine colors, is used for highlighting and accenting many of the ice sculptures. These giant popsicle-like blocks are made with simple food coloring that is added during the freezing process. Though it may sound simple, there’s a catch, the water must be stirred constantly to ensure a consistent color throughout the block when it is cut.

What holds each piece in place? You guessed it, ice. At nine degrees, ordinary water freezes quickly, adhering one piece to another and forming a solid bond. After slicing a piece of ice from a larger block, an artisan sprinkles the surface to be bonded with “snow.” He carefully pours water onto the piece and then lifts it into position.

The Gaylord Palms Resort is located at 6000 W Osceola Parkway in Kissimmee. For details, pricing and tickets, call 407-586-2000 or visit ChristmasAtGaylordPalms.com. 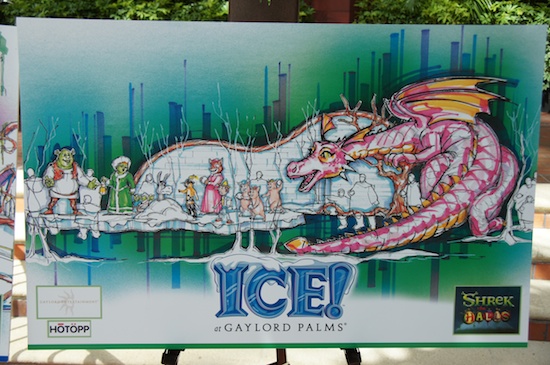 Out of the Loop: Upper decks on Disney’s new cruise ship to have something for all ages

Walk, run or stroll at the Give Kids The World 5K Gingerbread Run

Stars in the Parks: Zeta-Jones and Douglas...