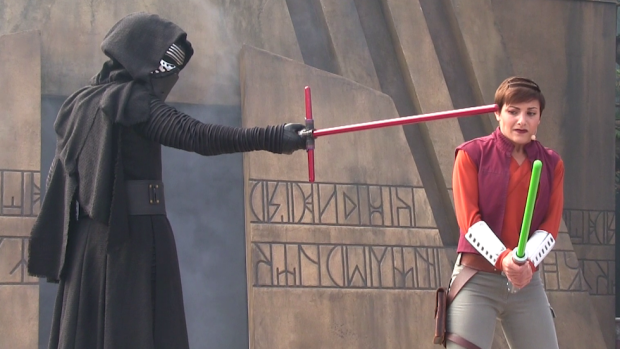 The menacing villain from Star Wars: The Force Awakens, Kylo Ren, now reveals himself during the daily Jedi Training: Trials of the Temple show at Disney’s Hollywood Studios.

Replacing Darth Maul’s appearance at the end of the show, Kylo Ren comes out and threatens the Jedi and Younglings, trying to take out Jedi apprentice Nedress. Watch as Kylo freaks out when he doesn’t get his way, just like in Episode 7.

For guests who want to get up close and personal with Kylo Ren, he is doing meet and greets inside Star Wars Launch Bay as well.

Kylo Ren will eventually be added to the Disneyland version of the show, but no date has been set. Check out our video below for a look at the full Jedi Training show with the original Darth Maul finale.