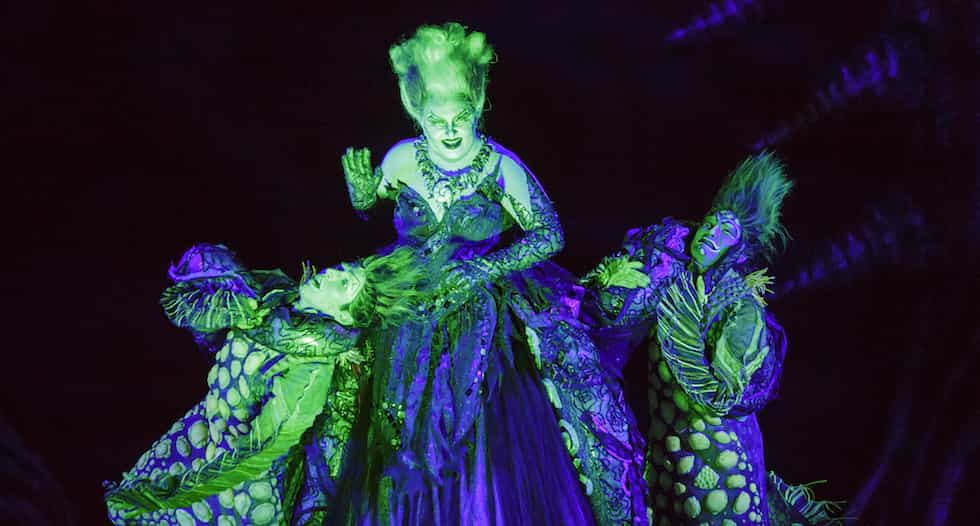 With the music being my favorite part of this Disney story, I was not disappointed by the orchestra, conducted by Colin R. Freeman, as well as the singing cast. I got chills during the overture of the show, and my heart swelled like the violins to Ariel’s “Part of Your World.”

My favorite performances were Eric’s “Her Voice,” as sung by Matthew Kacergis, and the incomparable “Poor Unfortunate Souls,” sung by Jennifer Allen as Ursula. This song in the musical was nearly ruined by a mic malfunction, had Allen not saved the performance with her swagger and professionalism as only Ursula could.

Another notable performance was Dane Stokinger as Chef Louis in “Les Poissons” and “Les Poissons (Reprise),” which I could not stop laughing through. It was fun, physical, exciting, and even had a small musical motif of “Be Our Guest” from Disney’s “Beauty and the Beast” thrown in for those with a keen ear for Disney songs.

Throughout the show, the acting in the show was campy, fun and very animated. Huey’s Ariel came across like a young child, excited and eager to learn of the world above. Melvin Abston was divine as Sebastian, and his excellent comedic timing gave the audience so many of the show’s laughs. The actors knew where to have fun and be silly, but also where to be serious and heartfelt, and it definitely helped to drive home the performance.

The set design was minimal and focused more on the actors onstage rather than cluttering it with complicated sets. This often worked in their favor during the land portions of the show. However, I felt that something was just missing during the portions of the show that took place under the sea. Maybe they needed more puppets, more fish swimming about, more dazzle – it just didn’t hit as hard as I felt it could have.

Overall, this show’s faults were minimal, and the cast recovered from any misstep they encountered to the audience’s delight. “The Little Mermaid” is a fun show for all ages, full of heart and laughs, and will no doubt satisfy any Ariel and Disney fan alike.

For tickets to the remaining shows (through March 12) for Disney’s “The Little Mermaid” and information on future performances, visit drphillipscenter.org.