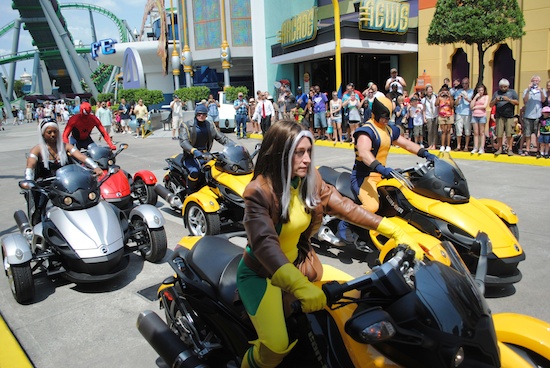 A super hero is defined by their trademark costume. The garment must be able to protect its owner and look good on the front page of a newspaper. The updated costumes introduced this month on Marvel Super Hero Island at Islands of Adventure provide all the heroes (and villains) with a new, detailed sleek look. Let’s take a look at the before and after photos of each.

Captain America can now hold his shield as opposed to having it strapped to his back. The letter “A” is placed above his eyes instead of the top of his head, so it will not be missed in photographs. The star on his chest is smaller and adds as an accent piece to his upper body. The detail to his upper body has been improved tremendously.

Storm’s costume change is also very noticeable. She has traded her white and yellow one piece costume for a black and silver fitted garment. Storm’s upper body is no longer hidden under white fabric.

Rouge now wears a floor length brown coat. She has also exchanged her fabric and plastic belt for a sleek modern upgrade.

The ears on Wolverine’s costume have been made smaller and more streamlined. The sides of his costume are more defined replacing the black triangles with yellow ones.

Cyclops has been given a blue mask to cover his hair, along with a new floor length coat. The yellow border around his eye piece has vanished to provide a polished overall look.

Spider-Man’s eyes have been made larger and elongated. And the iconic spider on his chest has been updated.

The villains of the island also have received upgrades.

The Green Goblin’s new purple fringed clothing is more detailed than the previous pink outfit. His skin is also solid green versus the old green and black fishnet look.

Doctor Doom has received a full transformation. His face has become more interactive allowing guests to peer into the eyes of evil. His hands look more like joints with movable fingers and less like silver painted gloves. All of Doom’s joints are more intricate. His cape is now the same color and includes more detail. Even Doom’s shoes have been made to look like part of the costume and instead of silver painted boots.

The heroes have also upgraded their mode of transportation.

The ATVs with large flags have been replaced with Can-Am Spyder roadsters. These new three wheeled motorcycles allow the heroes to move around Super Hero Island faster. In addition to speed, the heroes can also make tight turns with ease.