A look back at Jingle Ball 2013 with Miley Cyrus, Fifth Harmony, Austin Mahone and others – Photos/Video 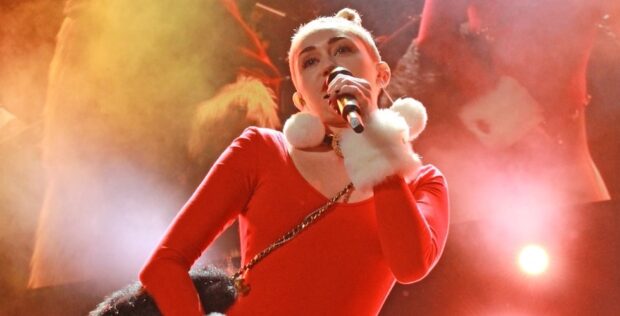 While there is way too much to put into one article, here are some highlights from the event: former X-Factor group, Fifth Harmony kicked off the show with hits from their new EP, “Better Together”. Fifth Harmony was followed by rapper Travie McCoy who performed his hit collaboration songs.

After that, rapper and singer, Jason Derulo took the stage getting the pop started with hits such as “The Other Side” and “Talk Dirty”. Then Robin Thicke hit the stage and got the audience up and dancing to his hit “Blurred Lines”. Then came Enrique Iglesias performing a wide variety of his Top 40 hits.

Next up was Florida favorite, Flo Rida who rapped hits including “Good Feeling” and “Wild Ones”. After that, teen heartthrob Austin Mahone hit the stage performing a mostly acoustic set. Then came Nickelodeon star Ariana Grande performing a variety of songs from her debut album, “Yours Truly”.

Closing the concert was Cyrus, who performed a holiday inspired set featuring new hits such as “Adore You”, “Wrecking Ball” and her classic hit, “Party in the USA”. Her performance, which you can see many up-close photos of in our gallery below, wasn’t only about the songs, but she also brought background dancers galore, confetti, a full band and more, making this the highlight of the night.

Earlier in the day, the Jingle Ball kicked off with the action-packed Pre-Show on the Plaza, the official pre-event celebration. This free event included performances by Fifth Harmony, Austin Mahone and Travie McCoy.

Check out our interviews with Austin Mahone, Enrique Iglesias and Fifth Harmony, with a look at performances by Miley Cyrus, Ariana Grande and more:

We were also on hand as the red carpet arrivals took place, so check out photos of all the performers in the photo gallery below. (Click on the photo to go to the next one.)

933 FLZ’s Jingle Ball is a yearly event. Past performers have included Maroon 5, Ke$ha, Demi Lovato and Justin Bieber. You never know who will show up next year.