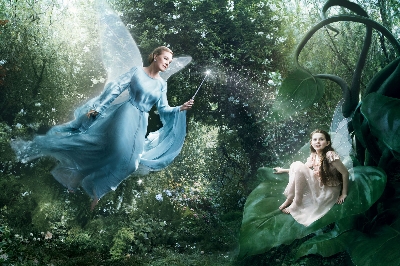 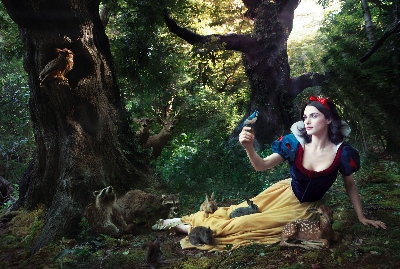 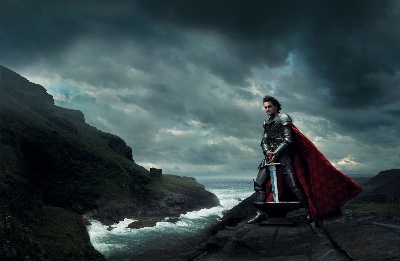 Framed through the lens of renowned photographer Annie Leibovitz, more stars are playing out their fantasies, living out their Disney dreams.

Actress Rachel Weisz is Snow White, tennis star Roger Federer is King Arthur from “The Sword in the Stone” and actress Julie Andrews is the Blue Fairy from “Pinocchio” with actress Abigail Breslin as Fira from “Disney Fairies” in a new wave of celebrity images celebrating “The Year of a Million Dreams” at Disney Parks.

They join Scarlett Johansson as Cinderella, Beyoncé as “Alice in Wonderland” twirling in a teacup and David Beckham atop a steed as Prince Phillip from “Sleeping Beauty” in a 14-page insert appearing later this year in several Condé Nast publications. Johansson, Beyoncé and Beckham also starred in the first flight of Leibovitz images last January.

The new photographs, placing stars in classic Disney fairy tale settings, continue the “Disney Dream Portrait Series” of celebrity images produced by Leibovitz as Disney Parks announces an extension, through 2008, of its “Year of a Million Dreams” celebration.

Elaborate sets and costuming went into the transformation of Weisz, Andrews, Breslin and Federer. Soundstages morphed into pixie-dusted spectacles as Leibovitz clicked away.

“It’s thrilling to have an opportunity to re-create the characters we all loved as children,” Leibovitz says. “The stories are real to my own children now, and their belief inspires me.”

Dreamlike images in a year of dreams was a natural, added Jay Rasulo, chairman of Walt Disney Parks and Resorts.

“Putting celebrities right inside their fantasies reinforces the power of dreams, where anything is possible,” he said. “Disney’s ‘Year of a Million Dreams’ is about the imaginations and dreams that are inside us all. Through the lens of Annie Leibovitz, these dreams and fantasies come alive. It’s the perfect fit.”

For Weisz, slipping on the familiar hair band and dress of Snow White was a dream come true. Her finished image, “Where You’re the Fairest of Them All,” is a soft, sylvan scene in which she is surrounded by forest friends.

“I think you always want to be Snow White, it’s every little girl’s dream,” Weisz said.

Federer traded his tennis racket for a regal sword, posing on a rock as the gallant King Arthur.

The finished photo, entitled “Where You’re Always King of the Court,” shows Federer, red cape flowing, beside a roiling sea.

In another photo, Breslin as Fira (from the “Disney Fairies” series) reposes on a giant leaf while the wand-waving Julie Andrews as the Blue Fairy of “Pinocchio” showers her with pixie dust. “Where the Magic Begins,” reads the photo.

On Oct. 1, Disney announced its “Year of a Million Dreams” celebration would be extended throughout 2008 at Disneyland Resort in California and Walt Disney World Resort in Florida. The celebration is filled with new attractions and entertainment plus more “dream-come-true” moments for guests than ever before.

I am so amazed at how great the stuff is on this web site. I have bookmarked this page and I truly plan on visiting the site in the upcoming days. Great job keep up the great work!

Rivers of Light and nighttime attractions at...

A look at the new Bolt meet...