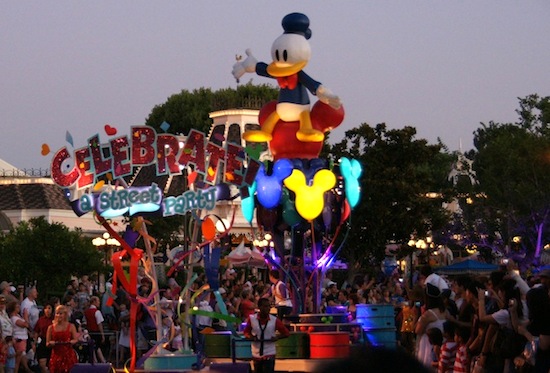 In addition to the Main Street Electrical Parade returning, new effects for Tower of Terror and new fireworks show we previously told you about as park of Walt Disney World’s Summer Nightastic, some more events were announced.

A Rock N’ Glow Dance Party will be held in the courtyard of Rock ‘n’ Roller Coaster at Disney’s Hollywood Studios. Sizzling summer sounds will be spun by DJs.

More high-energy music presented by DJs will get guests’ toes a-tapping during a Magic Kingdom street party. (Pictured above is a street party float at Disneyland last summer for their Summer Nightastic celebration.)

Summer Nightastic begins at Walt Disney World on June 6 and continues through Aug. 14, 2010.

Here’s a video of the original Summer Nightastic announcement:

to whom it may concern. Please please please could you find out if they would extend the disney summer nightastic until the end of august.
i would love to see this and we have already cancelled our holiday once due to the change of opening for the Harry Potter at Universal.

Hope to hear from you.

How can I get the soundtrack of Disney Nightastic!