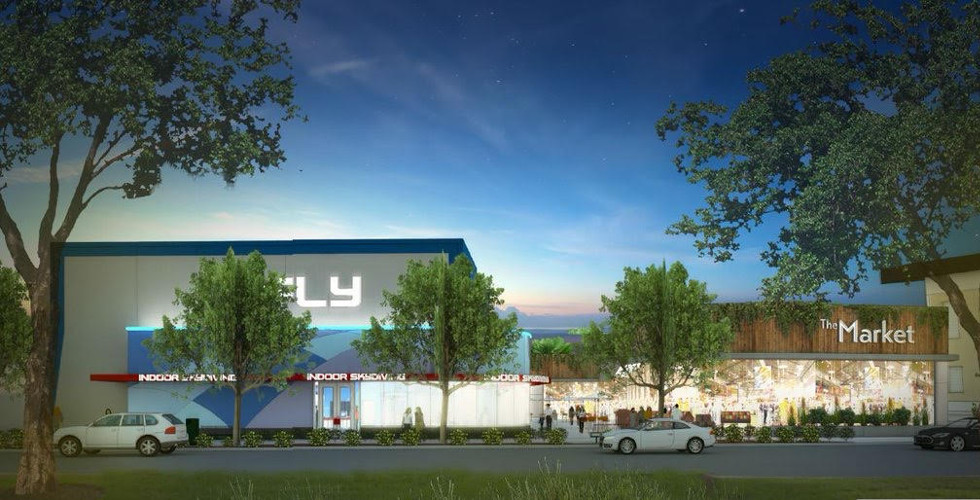 A new iFly indoor skydiving simulator is coming to International Drive in 2017.

After nearly 19 years at the corner of International Drive and Universal Boulevard, iFly is relocating closer to the Orange County Convention Center in early 2017, and we have an exclusive interview with iFly’s Tour & Travel national sales manager Nicholas Romeo about the upcoming move.

iFly is a skydiving simulator that lets visitors experience faux freefall without jumping out of an airplane. The new iFly Orlando will be going onto International Drive, between Icebar and WonderWorks on the site of the former Hawaiian Rumble miniature golf. According to Romeo, the new facility will be a big leap over the old one: “We’ll have the first double iFly tunnel in our company in the United States, so we’ll actually have two tunnels. They are going to be ground level; it’s going to be a one story building. The front of the building is going to be all glass, so you’ll be able to look into the building and see people fly while you’re walking on International Drive…We’ll also have more meeting space where people can hold small meetings, which we are not capable of now.”

The first iFly installation (originally known as SkyVenture) was invented by Bill Kitchen, the designer behind the planned Skyscraper Polercoaster at Skyplex. The brand began in Orlando, and the new I-Drive iFly will feature the company’s latest advancements, Romeo says. “Our technology has changed over the years. Bill’s design was that there were fans above us that actually would suck you up. The new concept of the tunnel is the fans are not directly above you, they are above but to the side, which makes two concurrent flows of air. It’s a lot smoother, and the new tunnels are now completely self-contained for continuous airflow at a constant temperature. In the original iFly, temperature is a factor. When it’s colder out, it’s extremely cold in the tunnel, and when it’s hot out it very hot.”

There are currently 50 iFlys operating around the world, and by the summer of 2017, in the United States there will be 37. The company’s goal is by 2017 there will be 100 around the world, including on the high seas: “We’re on the top deck of the Royal Caribbean cruise lines now, we just got approved for two more ships, so we’ll be on five total,” Romeo reports.

Though concept art shows that the new iFly will be neighbored by something called “The Market,” Romeo has no firm details on what’s going in next door. “We’ve been told it could be one store or multiple stores. It’s a long strip of building, and it’s a tentative concept, it has not been finalized.”

iFly won’t be shutting down their old location until the new location opens, tentatively in January, 2017.  When it does, there will be a slight increase in gate pricing. Even then, Romeo doesn’t expect to see the original iFly tower torn down right away. “I think we’re going to hold on to it to have it for training purposes. Because of us opening up so many locations, we’re constantly moving potential instructors all around to different locations for training.”

Check out this 2013 episode of Attractions The Show where we visited iFly Orlando:

I’ve driven by this new facility a handful of times recently and its really starting to take shape! I love that they are putting two tunnels side by side, it should be a really cool experience!