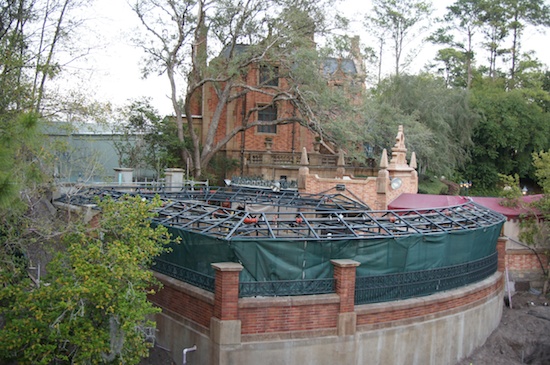 Changes are happening fast inside and outside the haunted Mansion in the Magic Kingdom in Walt Disney World. This past week new digital projections of hitchhiking ghosts have appeared inside the Mansion and tombstones and a certain sea captain have been spotted in the new queue under construction. Let’s take a look. 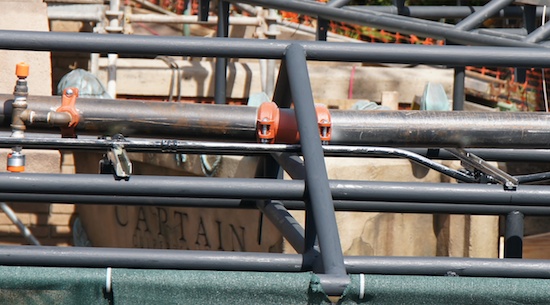 Here’s a look inside the new interactive queue area Disney is building just outside the entrance to the Haunted Mansion. You can clearly see the word “captain” on the side of this tomb. Look closer and you can see the captain’s boots sticking off the top on the right and his hat on the left.

There’s an old storyline for the Haunted Mansion that involves a sea captain and his bride. You can still see the sea captain’s portrait near the loading area of the ride inside. This hat looks similar to the one on the captain in the portrait.

It looks like his name has the word pepper in it, as the saying about his death also mentions something about pickled. On the other side of the tomb are some portholes. We’ve heard rumors the interactive area of the queue involves an octopus. Could it be the captain was killed by an octopus? 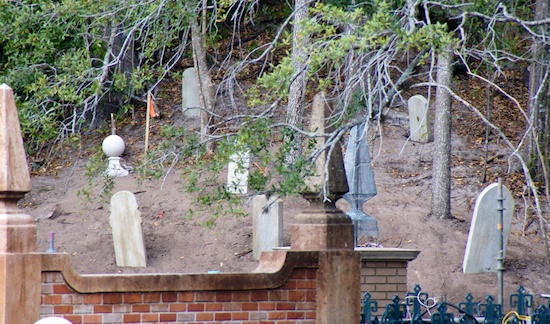 Above the queue construction are a number of blank tombstones. 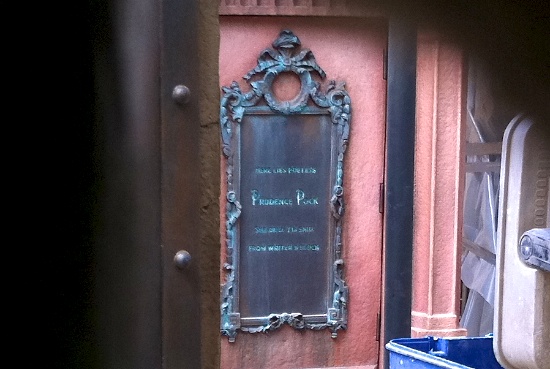 While in line, there’s a hole in the construction wall. If you peek through, you’ll see this epitaph. It reads, “Here lies poetess Prudence Pock. She (unreadable) from writer’s block.” 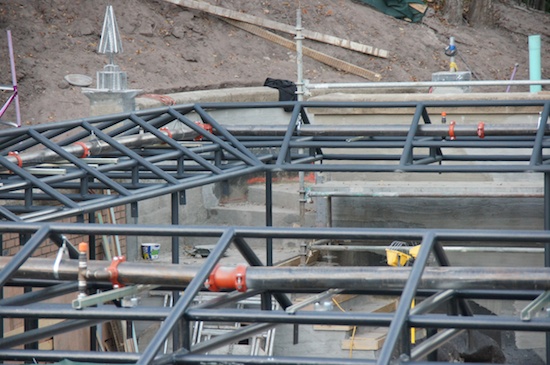 There are steps leading up the the area with the blank tombstones. It’s unknown if these steps will be used by guests.

Inside the Mansion, the familiar hitchhiking ghosts towards the end of the ride used to be animatronics waving their arms and statues of them seemingly inside your doom buggy with you. Now those have been replaced by projections. Cast members outside the ride have been telling guests who ask the effect they’re seeing is temporary. They said they put the projections up while they work on this area instead of closing the ride. No word if they will return as they once were or in an enhanced version. Here’s a video of the hitchhiking ghost projections:

PARKsaver: Gaylord Palms 'Rooms For Good' offers vacation accommodations and a chance to help out

From that photo, looks likes the Captain’s name is “Culpepper.” That Prudence epitaph remains illegible even after photoshop trickery.

they say this is only temporary cause of them doing work to the scene to make it more impressive and interactive. im all for it if they can get it right. haunted mansion is a classic.hope that the 3d movie version that del is doing is worth also seeing.knowing del its going to be an e ticket movie that is scary and fun at the same time.

Prudence Pock grave stone is a poem with the rhyme scheme being ABAB. Haven’t figured out the words yet.

Any word on when these enhancements will be complete? Will be visiting in 2 weeks and would love to see what they come up with for the graveyard.

@ Kelly- Supposedly by the end of March

We haven’t been told when it will open. But the end of March seems likely.

Hope the old tombstones return… not just for nostalgia’s sake, but they pay homage to the people that made this attraction what it is. Removing them altogether would be, in my opinion, a slap in the face to Disney history.