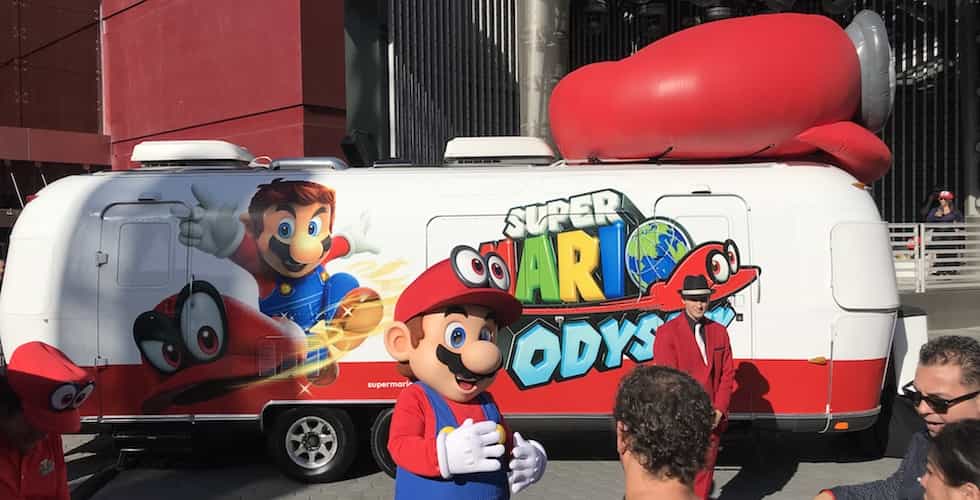 Mario and Cappy are exploring our Kingdoms across the country to celebrate the release of Super Mario Odyssey. Photo by Leo Camacho.

Everyone’s favorite plumber is setting out on a cross-country tour to explore our world before he explores the kingdoms of Super Mario Odyssey, which launches exclusively on the Nintendo Switch on Oct. 27.

Mario’s real-world odyssey began yesterday, Oct. 10,  in Los Angeles at Universal CityWalk, and will end in New York on Oct. 26, with many stops in between and more to be added along the way.

For the first time, the Mario costumed character will include Cappy, Mario’s new companion in the form of his classic “M” hat. In Super Mario Odyssey, Cappy enables Mario to capture objects, enemies and animals, as well as give him new movies like cap jump, cap throw and capture.

“Super Mario Odyssey is all about travel, exploration and that feeling you get when you discover something new and exciting,” said Reggie Fils-Aime, President and COO of Nintendo of America. “Mario’s interactive journey in the real world is a great way for fans to get excited for the game’s launch by getting hands-on time, as well as following Mario as he explores and discovers locations all across the country.”

Mario will be making five major stops during his tour, though more dates and stops will be added along the way. Each of the five major stops are inspired by Kingdoms in the game, including Metro Kingdom and Seaside Kingdom.

The final stop in New York will celebrate the launch of Super Mario Odyssey in Rockefeller Center next to the Nintendo NY store, and will feature game-play sampling, photos with Mario, and even more surprises and guests.

Check out the remaining tour stops and information on them below:

Super Mario Odyssey launches exclusively on the Nintendo Switch on Oct. 27. A bundle including the Switch system, a download code for the new game, Mario-themed red Joy-Con controllers and a carrying case will hit stores the same day. For more information about Super Mario Odyssey and Mario’s cross-country tour, visit supermario.nintendo.com.

Legoland Florida announces events for 2018, kicking off with Lego Ninjago Days in January

Feel the Lego cheer during holidays at...