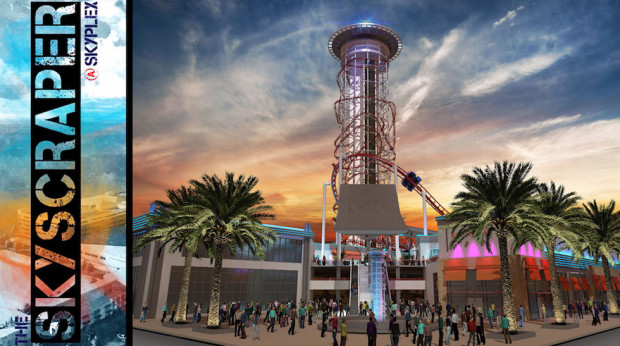 Skyplex, an already record-setting complex coming to International Drive, with the planned Skyscraper, is adding even more thrills.

The Skyscraper at Skyplex, the $500 million brainchild of Wallack Holdings, will now include a 524-foot vertical lift coming 24 feet under the ground and up to its ultimate height of 501 feet, developers David and Joshua Wallack announced recently. This will be the fourth world record planned for the Skyscraper “polercoaster” including the world’s tallest roller coaster, world’s tallest inversion, and the world’s steepest drop. The Skyscraper roller coaster is the anchor attraction at Skyplex.

“The support from Central Florida and around the world is very humbling,” said Joshua Wallack, managing principal of Skyplex and COO of Mango’s. “Skyplex will be the tallest roller coaster on Earth, very appropriate for the tourism capital of the world — Orlando, Florida — and belongs in the International Drive Entertainment District.”

Skyplex will comprise approximately 1.5 million square feet located on 14 acres in the Orlando attraction’s corridor. It will be the area’s largest indoor theme park and also will include SkyFly free fall zip line, simulators and a host of rides and games, as well as additional opportunities for attractions, interactive venues, upscale restaurants, bars and retail. Skyplex will have a 2,400 space parking garage and valet option.

At present, a 625 car parking garage/entertainment complex with rooftop restaurant and retail promenade is underway next to Mango’s, with a valet parking option.

There will be an Orange County Commission meeting on Dec. 1, 2015, for approval of the complex. The Skyplex developers are encouraging everyone to write an e-mail of support to [email protected].

Be sure to visit Mangos.com/Skyplex for more information on Skyplex and the opening of the new Mango’s Tropical Café Orlando, coming soon to International Drive.