Out of the Loop: 2012 will be a thrilling year with new attractions all around 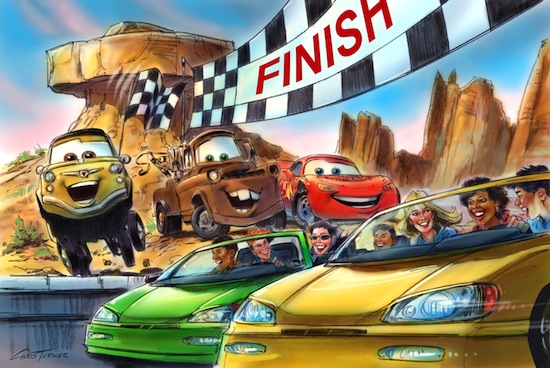 With a month of 2012 under our belts, I can’t help but be excited for the coming attractions season. There are several high profile, high-dollar attractions opening. Additionally, there are many new coasters being introduced this year including a new-to-North America coaster. Here are some of the attractions I am most anticipating for this year outside of Central Florida:

Cars Land, Disney California Adventure, Anaheim, California
As the billion dollar centerpiece of the re-imagined Disney California Adventure, this new land will incorporate several new attractions. Radiator Springs Racers will utilize ride technology used in Test Track at Epcot. Guests will find themselves racing along with characters from Pixar’s Cars movies.
Mater’s Junkyard Jamboree is described as a hybrid cross between the Mad Tea Party and a classic “whip” ride. It features our favorite tow truck, Mater, and the cattle-like farm implements from the first Cars film.
Finally, Luigi’s Flying Tires will be a nod to the classic Disneyland Flying Saucers. Guests will ride in tires that float and spin on a cushion of air knocking into their neighbors bumper-car style.

What is a wing rider coaster? These are a new breed of coaster. Only two are currently in existence in the world. This year will bring about four more. A wing rider coaster seats some or all of the riders not in a car directly over the track, but in seats to either side of the track. Wild Eagle, The Swarm and X-Flight are all designed by B&M. They all have slightly different specs, but the ride vehicles are essentially the same seating with two riders on either side of the track. The Wild Eagle and The Swarm are expected to debut in March while X-Flight is expected in May. Skyrush is also expected in 2012. It is designed by Intamin. The Skyrush ride vehicle will give the option of one wing seat on either side of the track with two seats in the middle that ride on the track.

What design will be better? Well, who knows? To me, they all look like fun!

Different SeaWorld Parks attractions at opposite sides of the country

Manta, Sea World, San Diego, California
A few years ago, Manta debuted at SeaWorld Orlando. This flying coaster, that suspends riders with a special restraint system, is unlike any other coaster in Orlando. When I heard they were bringing Manta to San Diego, I was excited for this park that traditionally was lacking in the thrill department. I was a little disappointed when I later found that the Manta in California would not be like Manta in Florida. Nonetheless, the twisting and curving track in San Diego will mimic a live manta albeit in the more traditional coaster configuration of a seated train car and will likely provide a good thrill. This attraction will also be coupled with a huge manta and sea life display.

Verbolten, Busch Gardens Williamsburg, Williamsburg, Virginia
Out east in Williamsburg, Virginia they are working on Verbolten. Last fall, I got a glimpse of the ride site on a visit to Busch Gardens. The heavily wooded site and former location of the Big Bad Wolf roller coaster resides within the Oktoberfest section of the park. This Zierer designed steel launch coaster will reach a maximum speed of 53 mph and include two launches. In this ride, a leisurely trip down the German highway transforms into a raucous ride through the Forbidden Black Forest.

The end of summer 2011 brought about a multitude of attractions announcements for Six Flags. We already discussed X-Flight opening at Six Flags Great America near Chicago.
• Six Flags Magic Mountain (Los Angeles) will debut Lex Luthor: Drop of Doom, a vertical drop ride.
• Superman Ultimate Flight will grace the skies of Six Flags Discovery Kingdom (San Francisco). This launch coaster boasts a 150 tall inversion which will rank among the tallest in the world.
• Six Flags New England will debut Goliath, a massive boomerang coaster that will travel speeds of 65 mph.
• Six Flags America near Washington DC is constructing its eighth coaster and first stand up style coaster.
• Six Flags Great Adventure (New Jersey) and Six Flags Fiesta Texas (San Antonio) will introduce SkyScreamer, a rotating, open-air swing ride.
• Other Six Flags locations will open water park attractions and others new family rides. Frankly, there are too many to list!

Here’s the press conference of the big announcements:

There’s already a lot to like about Universal Studios Hollywood. In the coming years, a west coast Wizarding World of Harry Potter will open. They have a real back lot tour including King Kong, Jimmy Fallon, and (wow) real working studios and sets. The most anticipated attraction for this year is Transformers: The Ride. This will be a high-def, 3D, audio-animatronic attraction that will include all the stars from the movies – i.e. the transforming robot/cars. It opened in late 2011 at Universal Studios Singapore and will open in Hollywood this year.

Cedar Fair is the parent company to a dozen amusement parks nationwide. Included in the 12 are amusement juggernauts Cedar Point and Knott’s Berry Farm. Cedar Fair is adding more WindSeeker rides to more parks. This is a 300-foot spinning ride that arrived at several parks last year. Dorney Park in Allentown, Penn. will debut Stinger. This forward then backward 138-foot tall coaster will invert three times each way and travel 55 mph.

The most exciting ride coming to Cedar Fair will open north of the border at Canada’s Wonderland near Toronto. The B&M designed $28 million giga coaster, Leviathan, is set to debut in May. The designation “giga” implies a total height of at least 300 feet. Indeed, Leviathan will stand 306 feet tall, travel 92 mph, and have an 80 degree angle of descent as it travels 5,486 feet of track over 3:28 minutes. I am personally psyched about this coaster because I’ve ridden its cousins Apollo’s Chariot (Busch Gardens Williamsburg) and Diamondback (Kings Island) both “hyper” (200 feet tall) coasters – two of my favorite coasters.

In the little town of Santa Claus, Ind. resides a world-class theme park. It is home to one of the best trios of woodie roller coasters including the Voyage that tops many lists of best wooden coasters. On the wetter side of the park sits several record-breaking, award winning water rides. The shoot-the-chute Pilgrim’s Plunge opened in 2009 and is the world’s tallest water ride with a 131-foot drop. In 2010, the Wildebeest opened as the world’s longest water coaster. The toboggan-style raft ride travels 1/3 of a mile. In 2012, the Mammoth will overtake the longest water coaster position by about 53 feet (a few seconds longer). The six-passenger round boat-style vehicle will rotate and have a different feel than Wildebeest. The ride is slated to open May 11, 2012.

Awesome post! When you see all that’s coming in 2012 it really is a lot of stuff. Can’t wait!

So you talk about some interesting things but not the fantasyland expansion at the Walt Disney worl resort, or Legoland Florida park!

“Here are some of the attractions I am most anticipating for this year OUTSIDE of Central Florida.”

Hi Sally, as BJCool points out, these are a listing of attractions outside of the Orlando and Centrl FLA corridor.

Will Universal Orlando get the Transformers Ride any time soon?

Hi Carl, Universal Orlando has not announced that Transformers is coming to Orlando as yet. There is plenty of speculation. Will it go where Jaws was? Will another of the classic attractions at the park go away to make room for it (Terminator? ET?).

Until an official announcement is made, it’s all speculation – but that’s fun too!

Well i cant wait for the Leviathan to open. I am 20 minutes drive from it! I saw some of the construction last time when I was in that area and it looks… Insane. There will be hours and hours of wait to ride it, but that will be on my list 🙂