Out of the Loop: Six Flags announces all to come in 2014 – Coasters, water parks and more 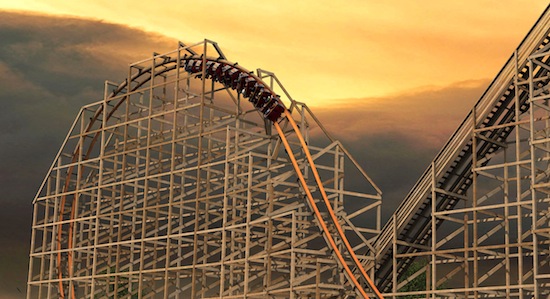 Six Flags touts itself as the “largest regional theme park company in the world”. About three-fourths of the American population is within about six hours drive of a Six Flags Park. Six Flags has committed to bringing something to each of its parks each year.

Over the past few years, Six Flags has held an all-encompassing announcement day. Announcement day this year was Aug. 29. For a theme park fan, it’s like Christmas morning. Let’s examine some of the bigger “gifts”.

As if someone needed a new reason to head to Chicago, Six Flags Great America will debut a new triple record-breaking wooden coaster, Goliath. Goliath will be the world’s tallest, fastest and steepest drop wooden coaster in the world. It will top out at 180 feet tall and plummet down a nearly vertical 85-degree drop and travel a maximum of 72 mph. Additionally, it will include inversions: a 180-degree zero G-roll twist, a head-over-heels winding inverted drop and a spiraling inverted zero G stall. Six Flags Great America is also home to one of only three American B&M wing rider coasters, X-Flight and nearly a dozen other coasters.

Six Flags Mexico near Mexico City will be introducing a new Medusa roller coaster in 2014. Medusa is currently one of the few wooden coasters in Latin America. When it reopens in 2014, it will be transformed into a hybrid coaster that rides on a steel track with a wooden base. It will be the first coaster of its kind in Mexico. Just north of the border, its cousins, Iron Rattler and New Texas Giant, have thrilled many riders already. The lift hill will reach a height of 98 feet and guests will hit a speed of 58 mph. The ride elements will include over banked turns, inversions, a head-over-heels winding coil and more. The renovated coaster will be known as Medusa Steel Coaster.

Six Flags Great Adventure in New Jersey is the biggest theme park in the world. In the biggest theme park in the world is the tallest roller coaster in the world, Kingda Ka. The coaster towers 456 feet and is the fastest coaster in North America at 128 mph. While that’s impressive, why do I bring up a coaster constructed in 2005? Well in 2014, Zumanjaro Drop of Doom will be constructed within the 456 foot tall track of Kingda Ka. Three separate lifts will elevate riders 415 feet in the air before dropping them 90 mph. When constructed, it will be the tallest and fastest drop ride in the world. Unfortunately, sometimes theme park progress dictates that an older ride must go. Rolling Thunder, the park’s classic wooden coaster, has closed and will be dismantled to make room for the new attraction.

Here’s a video rendering of Zumanjaro Drop of Doom:

Six Flags St. Louis
St. Louis, Mo. – Tsunami Soaker will debut. Think of it as a wet tea cups ride with individual water guns to spray riders in other boats.

Six Flags Fiesta Texas
San Antonio, Texas – The White Water Bay area of water park will be expanded with more guests amenities and attractions including a slide complex called Bahama Blaster. This capsule launched water slide will drop riders six stories where they will free-fall and twist at about 40 mph.

Six Flags Magic Mountain
Vallejo, Calif. – Colossus and Batman The Ride coasters will run backwards in the spring of 2014 for a limited time. Bugs Bunny World, the kids area, will be refreshed along with the addition of a new family coaster, the park’s record 19th coaster.

Six Flags Over Texas
Arlington, Texas – The kids area will expand with new attractions and rides. A new multi-featured water slide will be added to Hurricane Harbor.

La Ronde
Montreal, Canada – The Demon will be a new swinging, twisting, inverting and spinning ride. Thirty-two riders will sit back to back in an open gondola structure. Arms on either side of the gondola will randomly twist and spin the ride.

Here’s a video overview of the announcements, including renderings of some of the new rides in action:

Florida residents get a special rate at Discovery Cove through 2013