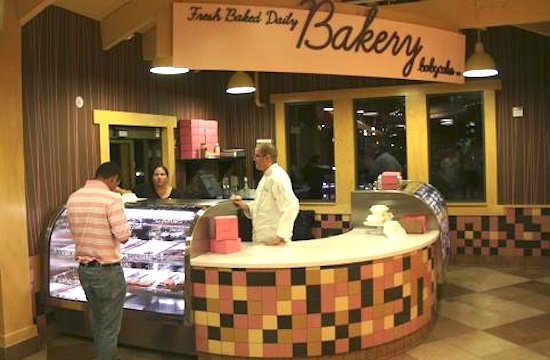 Hearing that McDonald’s was leaving Downtown Disney was enough of a shock, but to discover it was being replaced by three smaller venues, including one based around fresh salads and another being a vegan bakery, a betting man like myself would consider putting good money on the End of the World coming sooner than later. Thankfully it is all part of a fresh new dining experience which offers great tasting food that is much more healthy than your standard quick service meal.

For me personally, I was excited to learn about the opening of Babycakes NYC, a bakery that specializes in all vegan desserts. My girlfriend turned vegan almost two years ago, and one of the thing she missed the most was fresh bakery items such as cupcakes, donuts and brownies. You don’t realize how many food items are made using animal products until you’re around a vegan. Reading a list of ingredients becomes like an elaborate scavenger hunt, searching around until almost invariably finding an something that forces a vegan to put the food back on the shelf.

But vegetarians and vegans can now rejoice, as every single item that Babycakes NYC offers is 100 percent vegan. The items have no eggs, no milk – nothing but natural, wholesome ingredients. As a bonus, everything at Babycakes NYC is refined-sugar free, wheat free, gluten free and soy free. Talk about a boon for the many people with various allergies who have had to give up delicious treats! 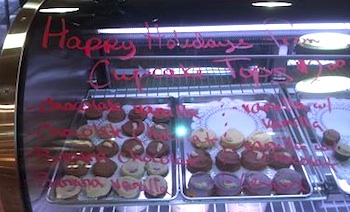 Cupcake tops, cookies and brownies are just a small sample of the fresh, delicious goodies available.

Each day a fresh batch of goodies is made for the patrons of Babycakes NYC. Cupcakes, brownies, cookies, cakes, muffins, biscuits and loaves are just the start. My personal favorite was a cookie sandwich, which had vanilla filling in between two chocolate chip cookies. My girlfriend enjoyed the banana bread and brownie bites. What’s amazing is that despite not having anything that I’m “used to” in my desserts (refined sugar and sweeteners among other things), everything tasted incredible. I’d imagine most people wouldn’t even know they were eating healthy unless they were told. Everything on the menu tastes exactly like its high fat, high sugar counterpart found at your local bakery.

My mouth watering at the Babycakes NYC display, I could already find myself making a mental list of everything else I wanted to try. Crumb cake, pumpkin bread and a red velvet cupcake with vanilla frosting lead my Babycakes NYC bucket list. I was also excited to learn that Babycakes NYC will make birthday cakes of various sizes. Who could ask for more? 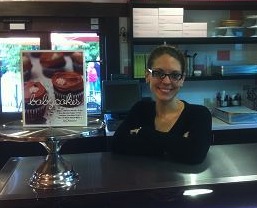 While at Babycakes NYC I was able to meet General Manager Emily Woesthoff. A long time Disney fan, Emily worked out of the original Babycakes NYC location in New York’s East Side and jumped for joy upon learning a location was opening up in Downtown Disney. “If a new location was opened up anywhere else I would have stayed in New York,” said Emily, “but as soon as I found out it was in Orlando, at Downtown Disney no less, I couldn’t wait to sign up!”

Babycakes NYC has their work cut out for them. The other two locations are in New York City and Los Angeles – cities seemingly much more open to progressive ideas than Orlando, where the refillable mug full of Diet Coke reigns king and ECVs are the official vehicle. It may be hard to retrain a public used to getting their food cooked in fatty greasy oil and filled with chemicals for “taste,” but Babycakes NYC is a refreshing new idea whose food is not only good for the body, but for the soul.

For more information on the Babycakes NYC you can visit BabycakesNYC.com. They also have a very popular Recipe Book in which you can make many of their delicious treats in your very own home. The cookbook is also available at the store.

You can also see an interview with the Babycakes NYC founder in Episode 2 of Orlando Attractions Magazine – The Show.

• Derek Burgan is a long time fanatic of Orlando theme parks and attractions. He spends most of days waiting hand and foot on two demanding Yorkshire Terriers, but in his spare time he also enjoys Star Wars, comic books, Harry Potter, pro wrestling, and many other things that would make you assume he is about 15 years old. He can be seen at Facebook.

Stars in the Parks: Kevin Jonas and bride celebrate one year

Oktoberfest brings a taste of Germany to Icon...

Emily’s one of my best friends! Her bakery is wonderful and so is she. Miss you emaline!

Exclusive sneak peek of Disney•Pixar’s ‘Inside Out’...