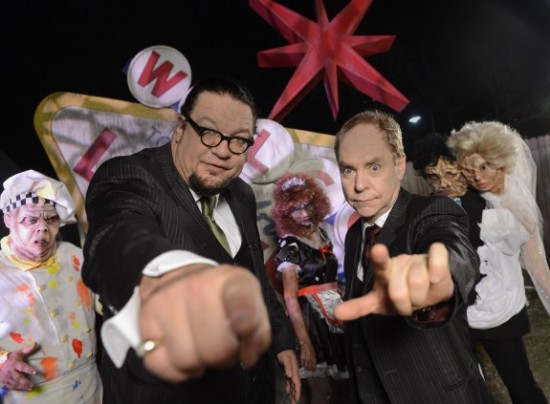 The house will be set in Las Vegas, as their real-life act is but in the haunted house, one of their magic tricks has gone wrong and the city is nuked. It will all be presented in 3D

The official description of the house on Halloween Horror Nights website reads:

World-renowned magicians Penn & Teller have accidentally nuked Las Vegas, but don’t worry, it’s nothing a fresh coat of paint and a truckload of BS can’t fix! Come on down to New Vegas, where all that glitters isn’t gold, and in fact probably has fatal levels of radioactivity.

Check out this video realeased by Universal Orlando featuring Penn and Teller announcing their house:

“We’ve done more than just tap into the wildly creative minds of Penn & Teller, the most influential illusionists in the world. We’ve been working really closely with them. You are literally going to hear Penn directing you through this toxic wasteland before coming face-to-face with both Penn & Teller in this jarring 3D experience,” said Jim Timon, Senior Vice President of Entertainment at Universal Orlando Resort.