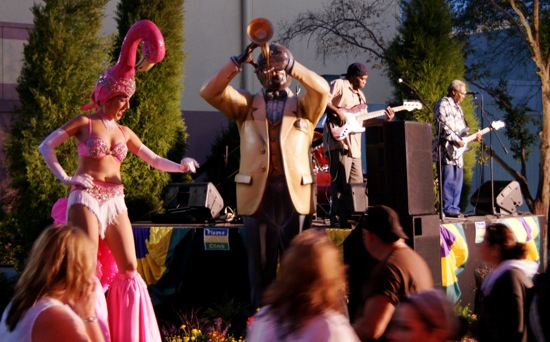 I got my first chance to go to this year’s Mardi Gras celebration at Universal Studios last Saturday and I came back with a lot of beads and photos.

It was really busy, as it was a three-day weekend, but we had a great time. We arrived around 4 p.m., rode a few rides with our Express Plus (Premier Passholders get Express entrance after 4 p.m.), ate some cajun food, then enjoyed the parade and watched most of the Sara Evens concert. And of course, I took a lot of photos of everything including the many stilt-walkers and others dressed up for the occasion.

Before the parade, a few of the festively dressed team members handed out beads. But you couldn’t just walk up and get them, they made you work for them. I saw some guys doing push-ups for them and another group singing their ABCs for beads. (I didn’t see any flashers.) There are also booths with physic readers and henna tattoos, as well as bands from New Orleans. You can also buy some fancy beads (and huge ones, if you have a strong neck), if you don’t want to do push-ups or catch them during the parade.

They’ve always offered spots on the parade floats to those chosen after submitting e-mails, but this year you can buy your way onto a float. For $30 you can be in a parade and throw beads. More info here.

Next Saturday’s concert features Third Eye Blind. There will also be a special appearance by World Wrestling Entertainment’s diva, Melina, and hall of fame manager Jimmy Hart during the parade as part of Universal’s promotion of this year’s Wrestlemania in Orlando.

The Ellen Degeneres Show is returning to Universal Orlando